Mucormycosis is a rare infection caused by the fungi of the order Mucorales. Normally, the human immune system is more than capable of fending molds entering our body. However, in immunocompromised patients, mucormycosis is extremely dangerous and often ends with high mortality rates. Some countries have seen a recent rise of these mycoses, most frequently in neutropenic patients with hematological diseases, ending with high mortality rates. 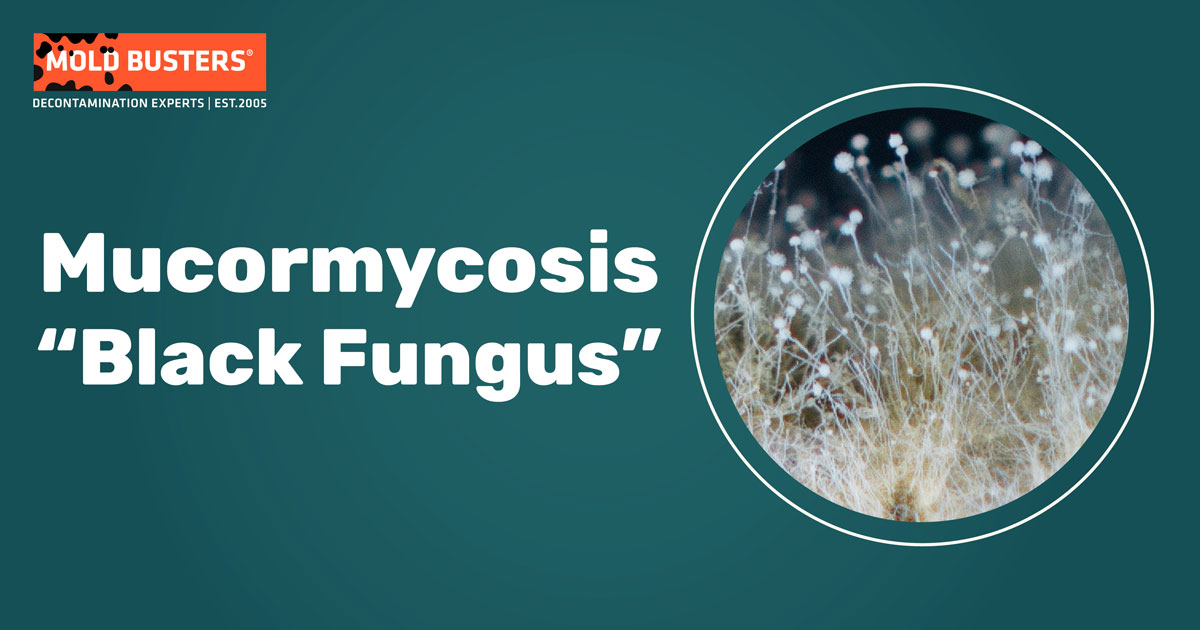 The most certain way to diagnose mucormycosis infection is to visualize the characteristic hyphae in tissue, sputum, exudates or scrapings, sampling, and cultivating the fungus in the laboratory. Sporangia are seldomly found, and the diagnosis is usually based on visual detection of hyphae. Mucorales fungi can be seen in infected tissues as erratically shaped, 6–25 mm in diameter (0.2–1.0 inches), non-septate, right-angle branching hyphae (Fig. 1). Non-septate hyphae with characteristic branching are the most prominent traits which prevent the misidentification of infectious Mucorales fungi with other frequent mycosis-causing species such as Aspergillus spp. or Candida spp.  Mucorales species are vasculotropic fungi (attacking blood vessels), and therefore hyphal infiltrations can often be found near blood vessels of the primary infected organs.

As mucormycosis is a rare disease, premortal diagnosis can be difficult. For instance, in a review study on 116 leukemia cases with pulmonary filamentous fungal infections, the correct diagnosis was made before death in only 10% percent of the patients. Similarly, in a review study of 37 hematological cancer patients with histologically documented mucormycosis, the right diagnosis was made only 35% of patients before the fatal outcomes (4–6).

Fortunately, specialized molecular tools had been developed, significantly improving the correct and timely diagnosis of this disease. The Internal transcribed spacer (ITS) region is the most widely sequenced DNA region for fungi in general. It is highly conservative within different species and can serve as a sort of a genetic barcode. It is reliable, fast, and often recommended as a first-line method for Mucorales identification (2,7).

The initial step of infection usually starts with the inhalation of fungal spores (Fig. 2). Mucormycosis can also start as wound infections and are even sometimes associated with intravenous drug abuse. Inhaled fungal spores may get deposited in the upper respiratory tract or pass through to the lung’s alveoli. Healthy organisms can fight off these intruders, as alveolar macrophages can prevent spores from germinating. However, in the immunocompromised organism, spore germination occurs, and hyphae start to grow. The formation of the mycelia (hyphal aggregate) marks the beginning of invasive mycosis. In cases of seriously reduced immunocompetence, the mycelium can invade deeper tissue layers.

In patients suffering from pulmonary mucormycosis, symptoms often mimic clinical manifestations described for aspergillosis. The main symptoms may include cough, fever, thoracic pain, difficulty breathing, and coughing up blood. Unfortunately, infections at the initial stage may often be asymptomatic (4).

Because Mucorales have a high tendency to invade blood vessels, this can often lead to the insufficient blood supply and thrombosis in the involved organ.  The infections might start to spread through the bloodstream, and septic thromboembolism may appear in other organs. Because of the lacking of circulating neutrophils in the bloodstream, this often ends fatally (2,5,8).

The treatment course usually stops the fungal reproduction and spreads with antifungal meds (Amphotericin B), unfortunately often with some side effects. Furthermore, Amphotericin B (either conventional or liposomal) is one of the few medications applied successfully in mucormycosis. However, if the fungus has already spread, an aggressive amputation of the infected body region must be done to stop its progress. Unfortunately, this sometimes means the removal of certain skin and bone segments, and sometimes even worse (1–3,9).

The most important conditions that predispose to mucormycosis include (2): 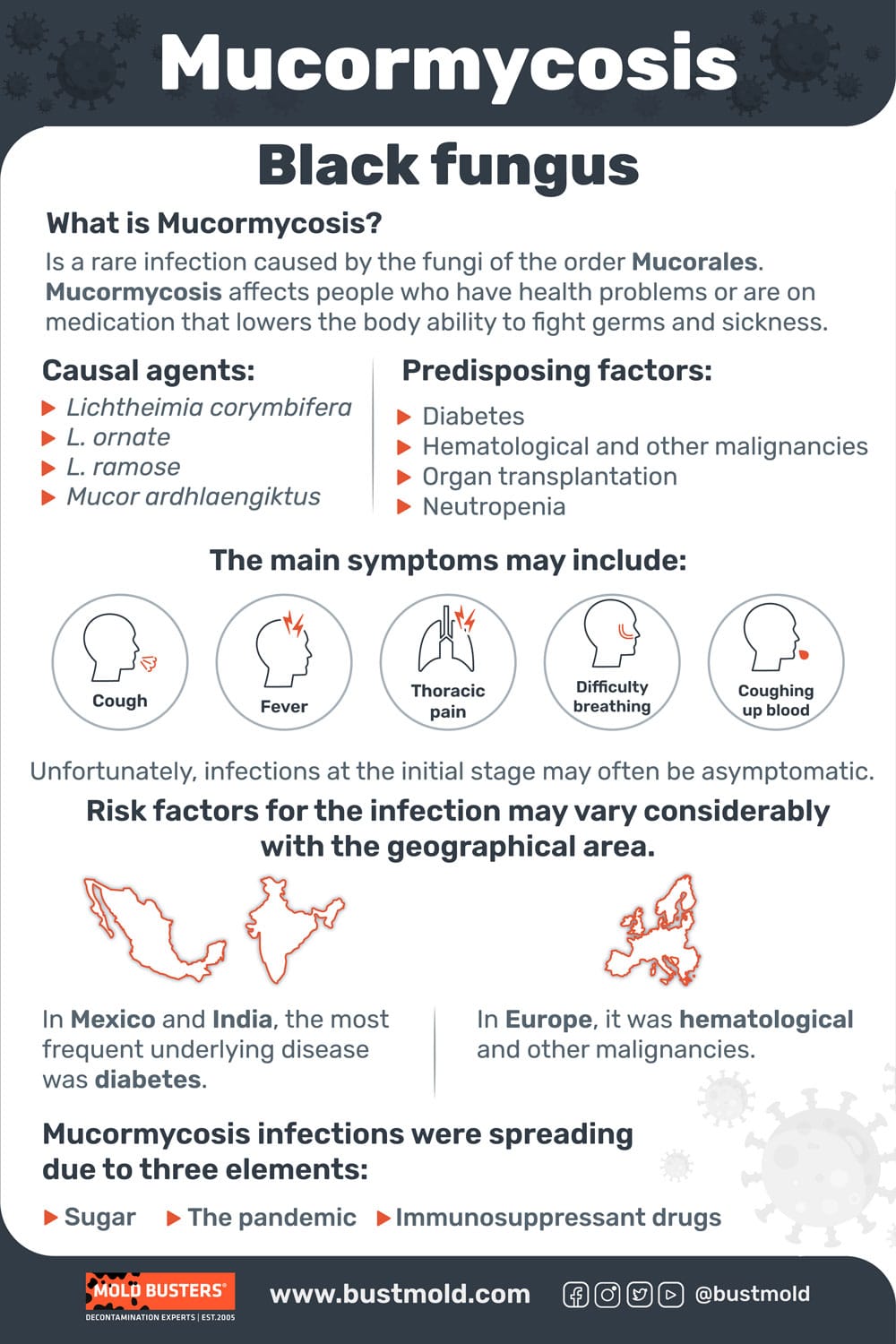 Some studies suggest that the underlying disease can be connected to the site of infection. For example, pulmonary mucormycosis can be associated with hematological malignancies and neutropenia, diabetes with sinusitis, and rhinocerebral infections, while trauma frequently leads to dermal mucormycosis. Risk factors for the infection may vary considerably with the geographical area. In Mexico and India, the most frequent underlying disease was diabetes, while in Europe, it was hematological and other malignancies (9–11).

Video: The “Black Fungus” (Mucormycosis) is Hitting Hard in India and Why?

Sometimes, several factors can come together can greatly exacerbate Mucorales infections, as it happened in 2020 in India. During the COVID-19 epidemics, a peculiar rise in several serious types of infections was noticed in already clogged hospitals of India. Swellings and headaches quickly turned to black sores spreading on throats, cheeks, eyes, and sometimes the brain. It turned out that the causal agents were of the Mucorales fungi, and the COVID-19 situation worsened the infections. According to a review study, mucormycosis infections were spreading due to three elements: sugar, immunosuppressant drugs, and the pandemic. Or, as the researchers say with their own words: “An unholy trinity of diabetes, rampant use of corticosteroid in a background of COVID-19 appears to increase mucormycosis” (9).

All About Mold What is Mold? Where to Look for Mold? Causes of Mold Health Effects of Mold Allergy to Mold Blastomyces Dermatitidis Mucormycosis Types of Mold How to Prevent Mold Mold Statistics and Facts