When people think of mold, the first thing that comes to mind is the image of white fluff growing on food that has spoiled. One thing that seems to be forgotten about is that molds can actually cause superficial and systemic diseases in humans and animals.

In most cases, unfortunately, Blastomyces dermatitidis will be underdiagnosed in humans due to the clinical signs resembling the common flu. Also, approximately 50% of these cases are asymptomatic, and so they go unnoticed by health care teams.

Now, don’t be alarmed, blastomycosis is 10 times less likely to occur in humans than in dogs. The goal of this paper is to explain what exactly this systemic mycosis disease is as it is not very well known in the human population. 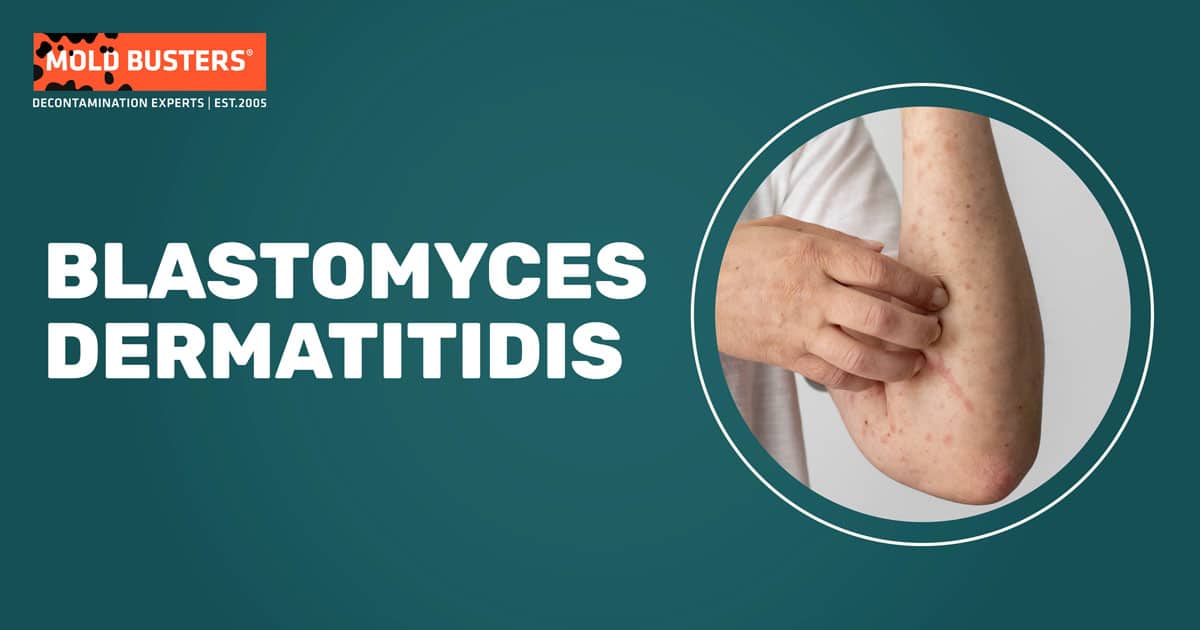 First I shall start by talking about the disease in dogs. The disease is transmitted through inhalation of the conidia or spores of the mold.

The mold is common in moist soil areas and leaves most commonly near rivers. Once the mold enters the body, it will migrate to the lungs and germinate into large budding yeast.

Some individuals are capable of fighting off the infection unless there is a huge population that was inhaled. In this case, there will be a development of chronic granulomatous pneumonia. Eventually, the disease will spread to the skin, bones, prostate, testes, and the eyes. This will result in a blockage within the capillaries forming ulcerations in the body. 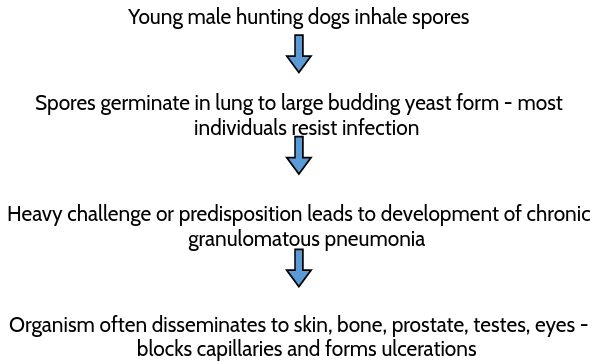 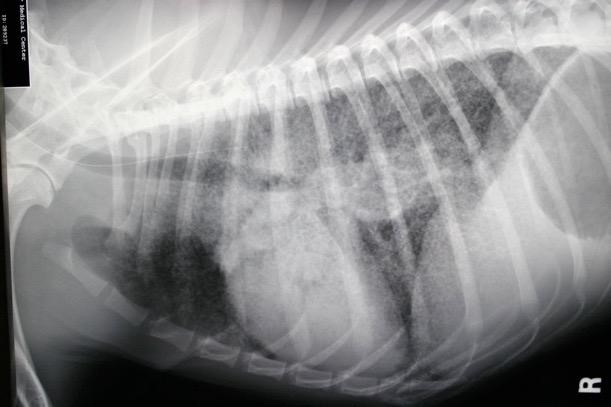 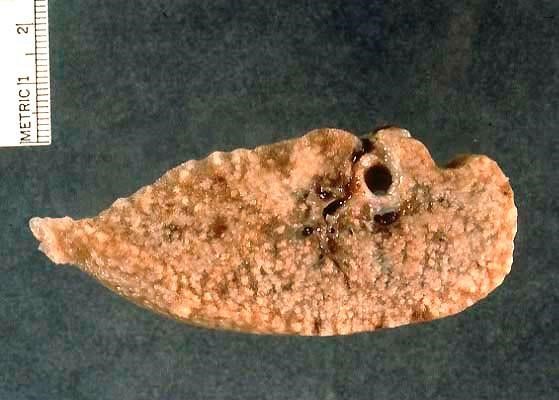 How to prevent Blastomyces dermatitidis?

Unfortunately, there is no way of preventing this disease nor anyway of clearing the environment from it. There also happens to be no method to test which areas are positive for Blastomyces dermatitidis.

In other words, an individual can’t simply identify which areas are free from the spores as no test is capable of giving a result to this answer.

The diagnosis for this disease is based on the clinical signs such as fever, coughing, weight loss, lameness, and loss of appetite. In both species, the incubation period for Blastomyces dermatitidis can range from 3 weeks to 3 months after the initial contact with the disease.

In other terms, if the case is not asymptomatic, clinical signs will appear within the aforementioned range. On top of the clinical signs, a cytology and/or a histopathology of the affected area would indicate whether the dog is positive for this disease.

On the other hand, humans have a different way of diagnosing which includes doing a blood test or urine analysis, but the clinical signs remain the same. The treatment of choice is the same for dogs as it is for humans. A veterinarian would prescribe an antifungal such as Itraconazole or Amphotericin B.

How dangerous is Blastomyces dermatitidis?

Fortunately, the prognosis is a positive one, as few dogs will die from this disease. Only in severe cases or in immunosuppressed individuals will there be a poor prognosis.

Also, if the disease manages to spread within the testicles, eyes, or the nervous system, relapse of this disease is more likely to happen as it is difficult to find drugs capable of penetrating these organs. The treatment in this case would have to be a surgical removal of the eyes or a castration of a male infected dog.

Finally for the mycosis disease in the dog, it is reassuring to humans when a veterinarian mentions that it is not zoonotic, therefore can’t be transmitted from animal to human. Although, if your dog has the disease, it might mean that it is near you or is present near an area where you walk with your dog. This means that there is a chance of inhaling the spores.

As mentioned before, the mycotic disease is 10 times less likely to affect a human compared to a dog. Although, humans who are more likely to go around wooden areas such as camping sites have a higher chance of contracting the disease. Blastomyces dermatitidis is considered endemic in the following areas: Ohio and Mississippi River valleys, the Great Lakes, and the Saint Lawrence River. The fungus also lives in Canada. 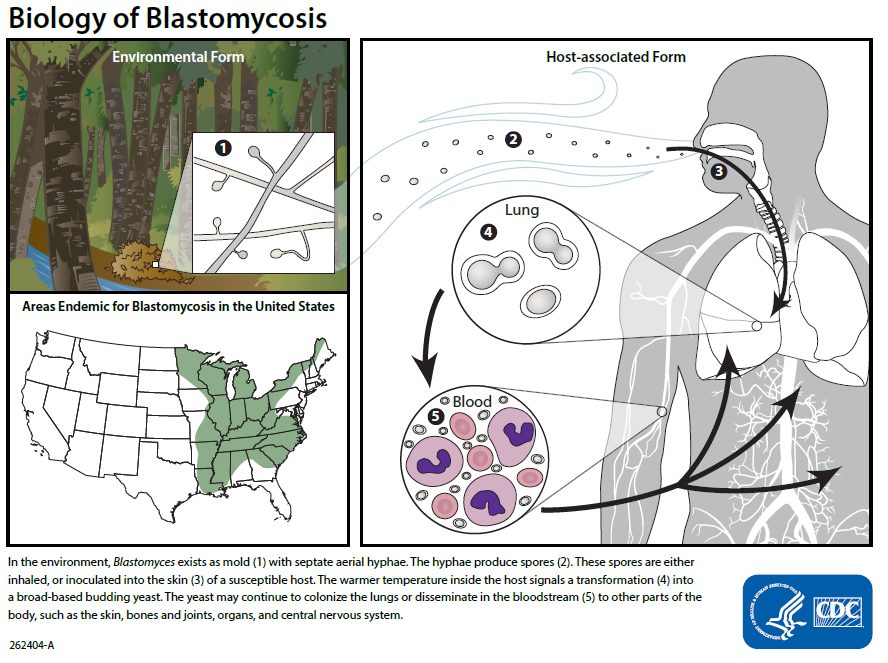 How to treat Blastomyces dermatitidis?

As mentioned above, the treatment plan is the same for a dog as it is for a human, although it was not mentioned that treatment can range from 6 months to a year depending on the severity of the disease. The prognosis in humans, like dogs, is a very good one unless the infection is within an immunosuppressed individual or a child.

Now having more information on the disease in animals and humans, I would like to write about the different preventative measures we can take together as a society in order to reduce the prevalence in our country.

I believe that as a an animal health student, it is mine and my fellow peers and veterinarians duty to inform the public of this systemic dimorphic mycosis.

We are the ones who have more knowledge on its effects since it is most common in dogs versus humans. We have also conducted more research on it in order to better understand what treatment plans will be optimum for the best possible prognosis of our patients. Also, there should be more awareness made around camping grounds and working areas that are involved with the forest areas.

Although it may not be a very common issue in today’s society, it has a higher prevalence compared to 50 years ago. The reason for this is because blastomycosis outbreaks only occur when there is disruption of the soil which happens during construction, camping, and hunting. As further proof of my statement, a study was conducted in the United States to determine the amounts of death from blastomycosis in humans. The result was 1,216 blastomycosis-related deaths occurred during 1990–2010. Within 20 years there is still a high number of deaths for a disease that is not that common. 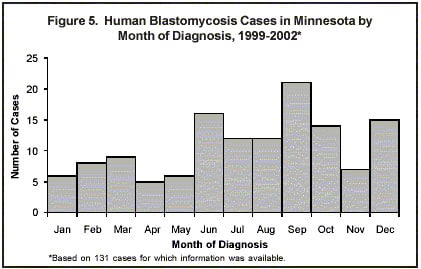 In summary, molds should be thought of as much more than just the white fluff that grows on your rotten food. It should be made aware that it can be pathogenic and is capable of having severe consequences. After all, fungal infections are generally chronic and slow progressing.