A naturally occurring mineral that can be mined in many parts of the world, asbestos was once considered a “magic mineral” due to its many appealing properties. Most notably, its resistance to heat, electricity and fire made it a popular choice in the manufacturing and construction industries. You can find asbestos in everyday products including tiles, pipes, insulation and talcum powder.

In the 20th century, scientists discovered that exposure to asbestos could cause latent disease including asbestosis, mesothelioma and other types of cancer. How? When an asbestos-containing material (ACM) is disturbed, it releases tiny asbestos fibres into the air, which can be inhaled and lead to severe lung damage.

Not all types of asbestos are created equal, however. And so, in this article, we will explore anthophyllite asbestos — what it is, what it looks like, and how it affects human health.

What is anthophyllite asbestos?

Anthophyllite asbestos belongs to the amphibole class of asbestos minerals. Although less common than other types of asbestos, anthophyllite is one of the more dangerous. This is because of the shape of its fibres, which resemble fine, sharp needles (as opposed to chrysotile asbestos, which has curly, serpentine-like fibres). Not only are these needle-like fibres more likely to be inhaled, but they can also do a lot of damage once inside the lungs.

In terms of its colour, anthophyllite asbestos is earthy brown or red, which is attributed to its high iron and magnesium content.

Despite evidence of its dangers, asbestos (including amphibole asbestos) is still being used in building construction across the world. You can even find anthophyllite asbestos in trace amounts in talcum powder, vermiculite products and composite flooring.

Despite over 55 countries putting in place a total ban on asbestos use, the United States is one of the few industrialized nations that has yet to do so. As such, asbestos is widely used in products like gaskets, roofing and fireproofing materials, along with other everyday products.

However, even in countries where asbestos is now banned (e.g. Canada), the toxic mineral can still be found in buildings that were built before the 1970s. Great caution should therefore be taken not to disturb or damage asbestos-containing materials (e.g. drywall, tiles, insulation) so that asbestos fibres do not become airborne.

In Canada, about 152,000 citizens are exposed to asbestos every year, especially those working in the construction sector. In 2018, Canada announced the highly anticipated asbestos ban, but with certain exemptions. It is illegal to manufacture, sell, export, or import asbestos in Canada, or to use products that contain the toxic mineral with the exception of certain industries that have been unable to find a suitable replacement for it.

Dangers of exposure to anthophyllite asbestos

According to estimates by the World Health Organization (WHO), about 125 million people globally are exposed to asbestos at the workplace. The International Labour Organization estimates that 107,000 workers die from diseases related to asbestos exposure each year. And so, we see that the threat of asbestos is very real.

One of the most severe conditions caused by asbestos exposure mesothelioma: a fatal and aggressive form of cancer that affects the membranes in the lungs, heart and abdomen. It is caused by inhalation of asbestos fibres, which then become lodged in the membranes of the inner organs. Unfortunately, this disease can take years before symptoms actually start to show. According to the Canadian Cancer Society, about 445 Canadians are diagnosed with mesothelioma per year.

Exposure to asbestos can also cause asbestosis as well as lung and ovarian cancers. In Canada, asbestos exposure is responsible for 1,900 lung cancer deaths annually.

How to find out if your home has anthophyllite asbestos?

One of the best things you can do to protect yourself and your family from anthophyllite asbestos exposure is to get your home tested for asbestos, especially if it was built before the 1980s. Any suspect materials can be tested, from tiles and wallpaper to insulation and drywall.

An asbestos test requires taking a sample of the material, so you should not attempt to do it yourself due to the extremely hazardous nature of asbestos.

Luckily, many professional asbestos companies are now opening up across Ontario and Quebec, offering a wide variety of testing and abatement options. At Mold Busters, we offer two types of asbestos tests:

Our asbestos testing services have provided residents of Ottawa and Montreal peace of mind about their indoor living and working environments. Results can be ready in as little as 24 hours so you can take action sooner rather than later.

How to remove anthophyllite asbestos from your home?

We cannot emphasize enough that anthophyllite asbestos abatement, or the removal of asbestos, should only be done by trained professionals.  If an asbestos test has confirmed the presence of asbestos in your home, you can hire a local company to perform a full inspection and scope of work prior to the actual removal. This step is crucial as it can often reveal other areas of your home that may be hiding asbestos. 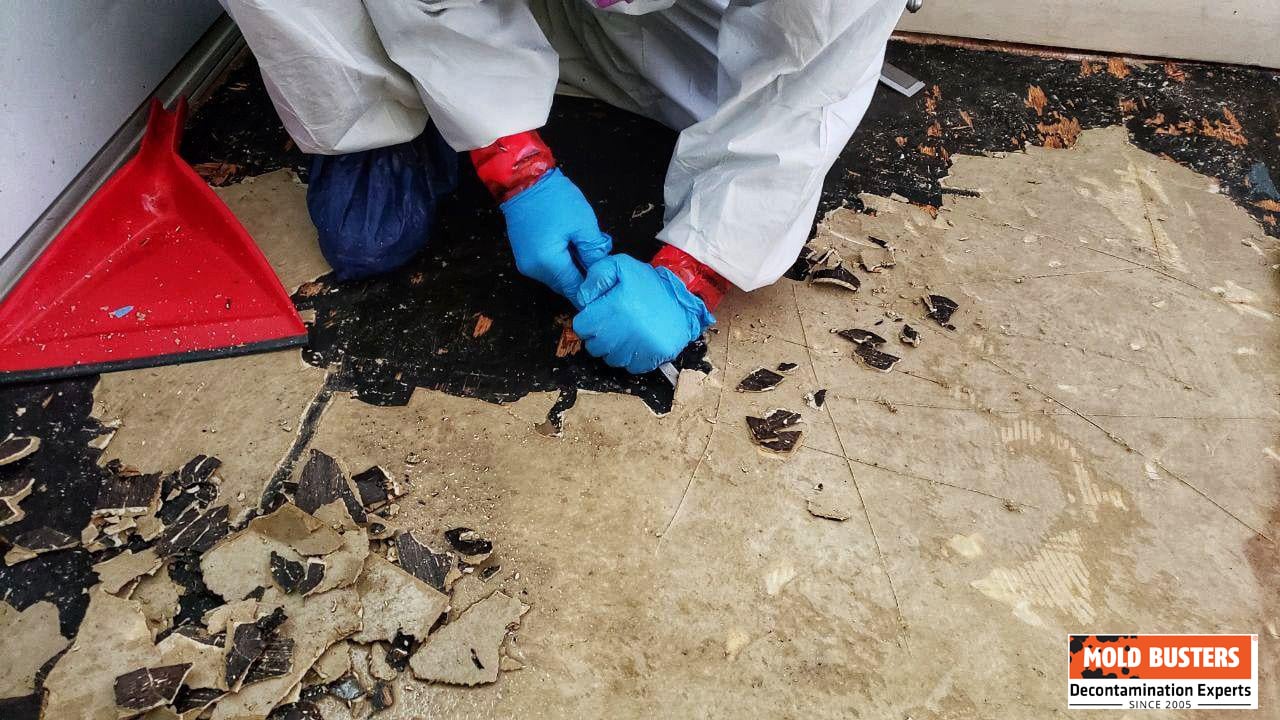 Professionals will be able to set up containment to prevent asbestos fibres from contaminating other areas of your home during the abatement work. They will also use personal protection equipment (PPE) and industry-grade vacuums and filters to ensure that all of the asbestos is removed from you home.

If you’re worried about asbestos in your home, the worst thing you can do is to ignore it. Check any suspicious materials, but do so with great care and caution. Call Mold Busters to schedule your asbestos test.