Ozone Generators: Yet Another Revolutionary Invention by Nikola Tesla

He was, undeniably, the biggest contributor to the advancement of technology the world has ever seen.

Thanks to Tesla, we have modern-day comforts like alternating current electricity (which powers most of today’s homes), radio communication, fluorescent bulbs and neon lights, and wireless transmission. Not to mention that his work was the foundation for x-ray technology, radar, the electron microscope and microwave ovens.

Impressive, right? We think so.

But it wasn’t until a recent trip to Belgrade, Serbia, where we visited the Nikola Tesla Museum, that we found out just how big of a role Tesla plays in the day-to-day business activities at Mold Busters.

We can’t say we’re surprised, but it seems that Tesla established the foundation for one of the world’s first ozone generators—yes, the ones Mold Busters uses for odour and mold removal. 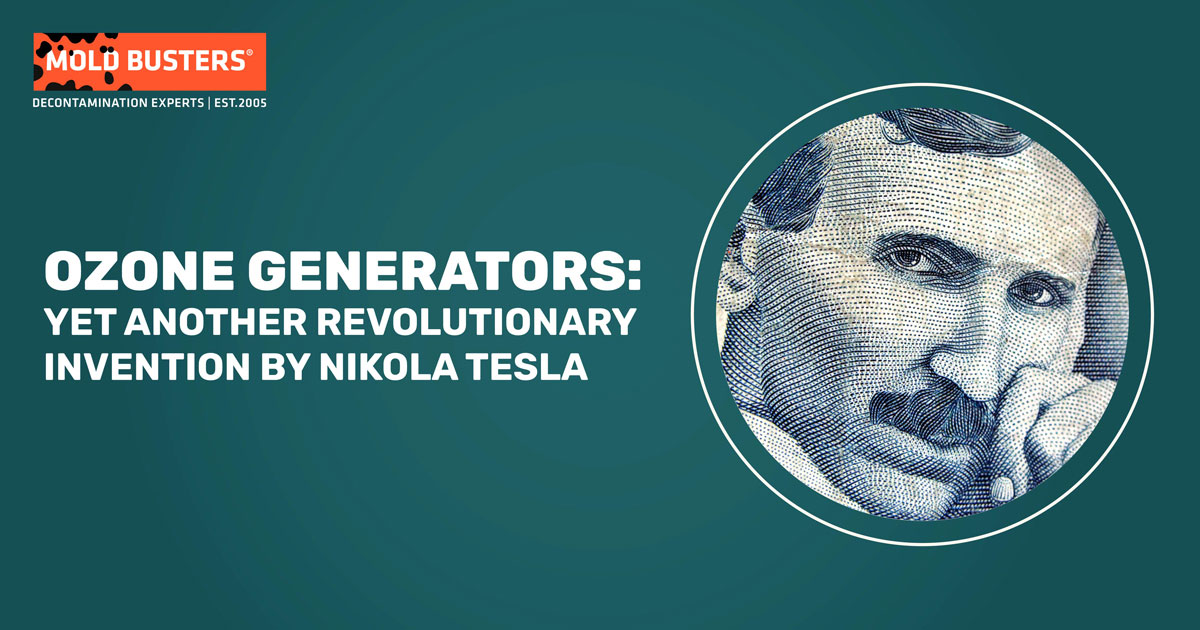 Although Tesla’s machines were used mainly for the creation of ozonated oils for natural healing and ozone therapy, the technology is based on the same principles that power the ozone machines we use on a daily basis for mold remediation and odour removal.

Let’s take a look back in time, over 100 years ago, at how it all started.

His main goal was to create a simple, inexpensive and effective apparatus for producing ozone, which he then sold to doctors for medical use and ozone therapy.

At that time in history, and even to this day, people believed that breathing in ozone bubbled through olive oil and other oils was beneficial to health.

Tesla believed in the power of ozone therapy so much so that soon after launching the Tesla Ozone Company, he began selling his ozone machines to doctors and naturopaths, who used them to create ozonated olive oil, a powerful natural remedy used particularly to treat skin conditions.

Much like a therapeutic skin cream, ozonated olive oil resembles a paste that acts like an antioxidant, releasing lactic acid and toxins trapped in the skin. This gives it seemingly endless health benefits.

The following is a list of the many reported benefits of ozone therapy:

Tesla’s ozone generators started popping up everywhere—even in Sears catalogues—and to this day, some companies are using this very technology for natural, homeopathic remedies.

Likewise, the Mold Busters team uses ozone treatments for cleaning and disinfecting, removing odours and killing mold. To learn more about these services, contact us today.

Needless to say, we have endless respect for Nikola Tesla and his groundbreaking ideas, work and contributions to society. Tesla was not only a genius but a generous man. One of his greatest concerns was making energy free, and he worked hard to make sure that his inventions were not used for military purposes.

Needless to say, a mind like his has yet to be matched.

What is an ozone generator usually referred to as in the public consumer world. A air purifier ? What type of store? A janitoral supply ? a medical equipment and supply? And what is the price range

An ozone generator is the conventional name for the ozone producing apparatus. An air purifier is different from an ozone generator. Air purifiers filter the air, while ozone generators produce a gas (Ozone) to clean and sanitize the environment. Numerous home improvement stores carry these devices, such as Home Depot, Canadian Tire, and Walmart. The price range depends on the area the device is able to cover. Smaller ozone generators which are ideal for residential use start at around $300.

Hi Gloria, You can try a local store or Amazon. Prices will generally vary between $300-$500.