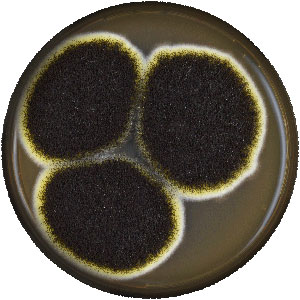 What is Aspergillus niger?

Aspergillus niger is one of the most important molds used in biotechnology. Under the FDA, it has a status of “generally regarded as safe”, and it’s been in use for many decades in the production of citric acid and other food-related enzymes.

A. niger is a filamentous, aerobic, and ubiquitous saprobic species, most often found in litter, compost, and decaying plant material. It is generally considered as a non-pathogenic aspergillus, infecting only immunocompromised individuals and occasionally acting as a would pathogen. It can produce mycotoxins only under certain conditions.

Video: What is Aspergillus niger?

Aspergillus niger belongs to the black aspergilli group (Aspergillus subgenus Circumdati section Nigri). This section is comprised of 18 species, of which A. niger, A. tubingensis, A. brasiliensis, A. acidus, A. carbonarius, and A. ibericus are widespread, while the remaining aspergilli are concentrated mainly in tropical regions (1). 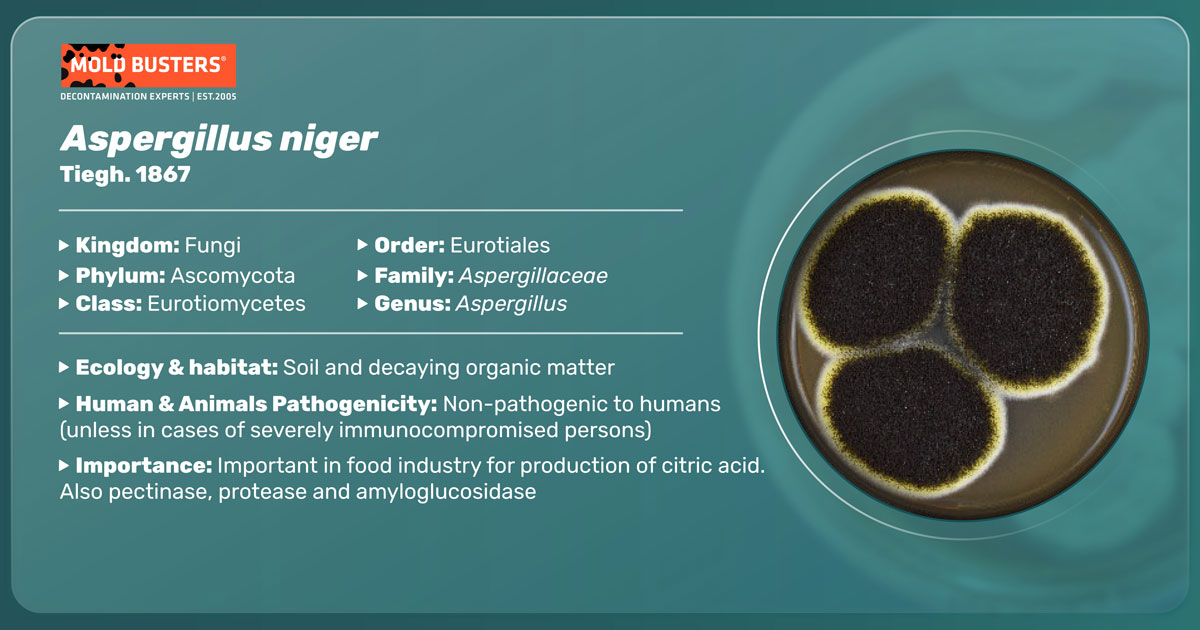 Where can Aspergillus niger be found?

A. niger is one of the most common species of the genus Aspergillus. It is ubiquitous in soil and commonly isolated from indoor environments. It is a frequent contaminant of foods and causes a disease named “black mold” on plants, fruits, and vegetables such as grapes, apricots, onions, and peanuts. Due to its production of black colonies, it is often confused with Stachybotrys, which is also often referred to as the “black mold“.

Aspergillus niger is resilient and can grow under a wide temperature range. Growing temperature is between 6–47°C (42–116°F) with a high optimum ranging between 35–37°C (95–99°F). The minimum required media water activity for growth is aw= 0.77–0.88, coming relatively high in comparison to other aspergilli. A. niger can grow under very wide pH conditions, ranging from 1.4–9.8. Its adaptability for a wide range of ecological conditions, and its ample production of airborne spores, which are distributed via the air, gives the ability to A. niger to be frequent worldwide, especially in warm and humid places. Indoors, it can often be found on damp walls and in areas with significant moisture, such as bathrooms, basements, and kitchens. It can be found in household dust and also on fruits, cereals, and other organic matter (2).

Aspergillus niger produces large colonies, min 60mm (2.3 inches) in diameter, which outgrow Petri dish relatively fast. The colony is made of plain, white mycelium, above which a layer of closely packed, black to dark-brown conidial heads roughly 2–3 mm high is formed (Fig. 1). This dark layer gives the A. niger its distinctive look and scientific name (“niger” is dark in Latin), as the species usually doesn’t produce any other colors when grown (2,3).

How is Aspergillus niger used?

When citric acid was originally produced by fermentation in 1919, A. niger became an industrially used organism. Since then, and still today, citric acid is almost completely produced by A. niger (and A. wentii) fermentation, as it is safe and produced in sufficient amounts. The United States Food and Drugs Administration (FDA) gave A. niger GRAS status (Generally Regarded As Safe), provided that only non-pathogenic and non-toxigenic strains be used in the production processes (4,5).

Citric acid is the primary acidulant in the food and beverage industries. Acidulants are compounds that confer a tart, sour, or acidic flavor to foods, they enhance the perceived sweetness, can act as emulsifiers, and alter the pH levels. Citric acid is used in food products such as soft drinks and fruit juices, wines, desserts jellies and jams, candy. In the medical and pharmaceutical industry, citric acid and citrates are used for the preservation and storage of donated blood. For cosmetics products, it serves as a buffer, for pH levels adjustment, and as an anti-oxidant. Citric acid is also used for the production of detergents and leather tanning (5,6).

Aspergillus niger is considered generally non-pathogenic and non-toxigenic. Humans have been exposed to A. niger spores daily without developing any symptoms or infections. In rare cases of A. niger being able to successfully infect the human body as an opportunistic invader, all patients have had a history of severe illness or some sort of immunosuppressive treatment.

Healthy humans take inhale Aspergillus niger spores without any problems because our immune systems have evolved to constantly find and combat these foreign structures. Our neutrophils (a type of white blood cell) can deal with any fungal spores that make it to our lungs upon inhalation (7). However, if the host’s immune system is compromised due to a certain disease or a treatment (corticosteroids or chemotherapy), the spores may germinate cause the disease known as Aspergillosis. A. niger-induced aspergillosis is rare but sometimes more frequent among horticulturists who inhale peat dust (and generally workers often exposed to plant material), which can be rich in aspergilli spores. The treatment of aspergillosis will vary depending on the type and the patient’s overall health. It can range from just monitoring the patients, administering antifungal therapy, or in most advanced cases – combined meds therapy with surgical intervention (5,8,9).

A. niger strains generally produce a number of safe secondary metabolites, with only ochratoxin A can be regarded as a nephrotoxic and carcinogenic mycotoxin. However, only 3–10% of the examined A. niger strains have tested positive for the production of ochratoxin A, and only under favorable conditions (5,10).

Mycosis of the ear is one of the more frequent health issues in the tropics, with A. niger isolated in 5% of these cases. A. niger causes local inflammation and mycelial growth on cerumen (ear wax) on the skin of the ear canal. These infections are named otomycosis, which can cause painful sensations, brief hearing loss, and, only in severe and rare cases, damage to the inner ear. However, this species is likely only a secondary invader rather than the causative organism, like most cases, the patients had been treated with antibiotics before the isolation of A. niger from the infected site (5,11).

As part of the data analysis presented inside our mold statistics resource page, we have calculated how often mold spore types appear in different parts of the indoor environment when mold levels are elevated. Below are the stats for Aspergillus niger:

How to identify Aspergillus niger in your home?

If you have a spot of mold but aren’t sure if it’s Aspergillus niger, calling a professional mold inspection company may be the best way forward. While Aspergillus niger is considered safe, it can easily be confused with other types of mold and various Aspergillus species, which are considerably more dangerous.

How to get rid of Aspergillus niger?

While home remedies are usually effective, larger or deeper Aspergillus niger infestations can be quite persistent and are best left for mold removal professionals. Call Mold Busters today to schedule an appointment.