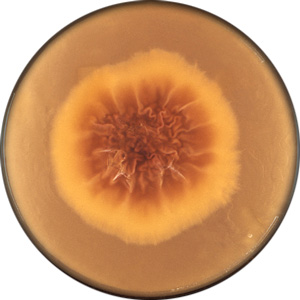 Fungi have affected us all at one point or another. Most fungi develop in natural settings, existing as decomposers in the soil or developing on plants. Nevertheless, some species of fungi affect human beings, either as mold developing in our buildings or on our food sources – or even worse – on our bodies. Trichophyton falls into the latter category.

Trichophyton is a genus of fungi that (along with Epidermophyton and Microsporum) belongs to the group known as dermatophytes. This group of closely related fungi have the ability to invade keratinized tissue like skin, nails and hair and produce an infection. Most infections are superficial and are limited to non-living tissues such as the topmost layers of the skin, but they can develop into deeper invasive diseases in immunocompromised hosts [1].

There are about 20 species of Trichophyton. Although the genus as a whole is considered to be cosmopolitan, only T. rubrum, T. mentagrophytes and T. tonsurans have true worldwide distribution. The distribution of other Trichophyton species is limited. They can be divided into anthropophilic, zoophilic, and geophilic species based on their primary habitat associations.

What are common Trichophyton species?

Where can you find Trichophyton mold in your home?

You are more likely to find Trichophyton on yourself! Finding it is quite easy as the infected area will itch and be red. Like most other fungi, Trichophyton thrives in moist and dark environments, such as the inside of your sneakers. However, it can survive without human presence and can be found in showers, bathtubs, floors, carpets, socks, clothes and so on. Its spores can persist for years and are highly heat resistant [2].

Technically, Trichophyton can also be found on your pets, or in the soil in and around your home. However, as it needs a host to develop, this isn’t the sort of mold that will grow into an unsightly mass on your walls and ceilings (unless they are made of keratin!).

How is Trichophyton transmitted?

Trichophyton is transmitted through its spores and also through direct or indirect contact with infected hosts. It can be transmitted between humans, and also from animals to humans and vice versa. Dermatophytosis caused by Trichophyton can be contracted through contact with infected humans or animals or with contaminated objects, such as towels, bedding, manicure appliances, and hairbrushes [4]. Furthermore, Trichophyton related skin conditions are frequently spread in areas such as pools, spas, locker rooms and shared showering facilities. Maintenance of proper hygiene limits the spread of Trichophyton.

Trichophyton related diseases are caused by contact with spores or with contaminated particles, such as hairs or skin flakes. If they happen to reach a suitable area, they will likely grow and develop into an uncomfortable skin condition. This can cause a ripple effect of contamination and can spread like wildfire throughout a community if left unchecked. All it takes is one person to bring Trichophyton to the pool or the gym in order for it to spread amongst a group of people.

Proper hygiene and good ventilation lower the chance of contracting dermatophytosis. For example, you are far less likely to develop Athlete’s Foot if you wear cotton socks and well ventilated footwear as opposed to shoes and socks made out of synthetic materials.

Which diseases are caused by Trichophyton?

We’ve all heard of someone having a fungal infection at some point. Maybe you have even struggled with a fungal infection yourself. Dermatophytosis is far from uncommon and affects 20-25% of the world’s population [5]. Thankfully, this type of condition is more unpleasant than dangerous and is usually easily solved with antifungal creams.

Infections caused by dermatophytes are called tinea and are usually followed by a Latin term depending on the area of the body that they develop on. They are sometimes referred to as “ringworm”. However, this is a misnomer as no worms are involved. Common clinical manifestations are listed below.

The sweaty environment inside a runner’s sock is the ideal place for Trichophyton to thrive. Not so much is known about exactly how infections arise. Some researchers believe that many people harbour Trichophyton on their skin but it remains dormant for prolonged periods, with infections manifesting when trigger factors lower resistance [2].

In any case, the risk of Athlete’s Foot can be lowered by practising good foot hygiene (frequent washing, thorough drying and application of foot powder), avoiding excessive sweating and wearing sandals or other well ventilated footwear when possible. Shoes, socks and towels should not be shared and infected individuals should not expose others by walking barefoot in locker rooms, public showers or around swimming pools [2].

How does Trichophyton cause Ringworm?

Similarly to how it causes Athlete’s Foot, Trichophyton causes a skin condition commonly known as ringworm. The fungi can be transmitted by infected clothing, towels and bedding. Sharing such items with infected individuals is a sure way of contracting ringworm. Also, people with ringworm should not engage in contact sports such as wrestling or rugby [2].

Absoluteley. Trichophyton can be transmitted in a number of ways, mostly involving contact with skin flakes from an infected individual. Infections can be transmitted by direct skin to skin contact or by sharing clothing and items such as bedding, manicure appliances, electric shavers, hair brushes, shower caps… the list goes on. Furthermore, Trichophyton can survive for prolonged periods in places with enough moisture and is often contracted in and around swimming pools, showers (especially public ones), locker rooms and so on. It can also be transferred from animals to humans, which is a frequent problem in rural settings.

How to identify Trichophyton?

Trichophyton related dermatophytosis can have many symptoms depending on the area of infection. Most common infections begin with red and itchy skin, which can often dry out and become flaky or scaly.

However, many skin related diseases have the same symptoms and to know for sure if it is dermatophytosis a scraping of the skin has to be observed under a microscope and in some cases it has to be cultured. In most cases this sort of infection is more of a nuisance rather than anything serious but it should still be checked by a doctor.

How to remove Trichophyton?

If you suspect you have contracted one of the diseases caused by Trichophyton, be sure to visit a doctor, especially if the condition persists after 2 weeks. You are most likely to receive an antifungal cream or topical treatment. In some cases oral therapy is prescribed, particularly in treatment of disease that is extensive, that affects hair and nails, and that does not respond to topical agents [6].

If your soil is contaminated, it is important to eradicate Trichophyton in order to prevent recurring infections. If you suspect Trichophyton in your soil, it is best to contact a professional mold removal service.

Mold is a tricky thing to conquer on your own. Hiring the services of companies that have experience working directly with mold can save you a lot of discomfort and time.

Mold Busters offer comprehensive mold testing and removal services. We have the technology and the know-how to test your property for Trichophyton or any other type of mold. Call us today to learn more.