Molds can affect humankind in many ways. Some of the most common mold related issues that everyone knows about are related to food spoilage or unsightly mold growths developing in our bathrooms or kitchens. 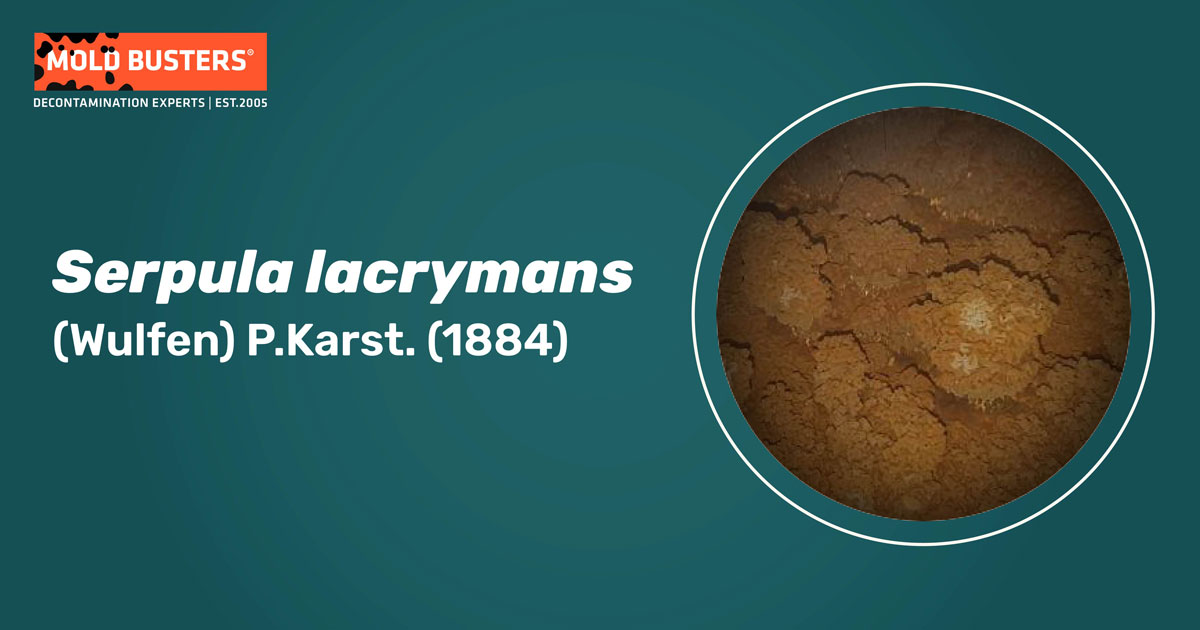 Most species of mold live far away from the presence of humans and are not known to have any effect on us. Others are known to cause severe diseases, some of which can even be fatal. The subject of this article poses a different kind of threat, one which concerns the structural integrity of our homes. Namely, this devastating fungus can practically eat an entire house or building.

Serpula lacrymans has troubled humans throughout the ages – it is even mentioned in the Bible [1]. Today it is a widespread problem in Europe and North America which costs hundreds of millions of dollars in repairs every year. 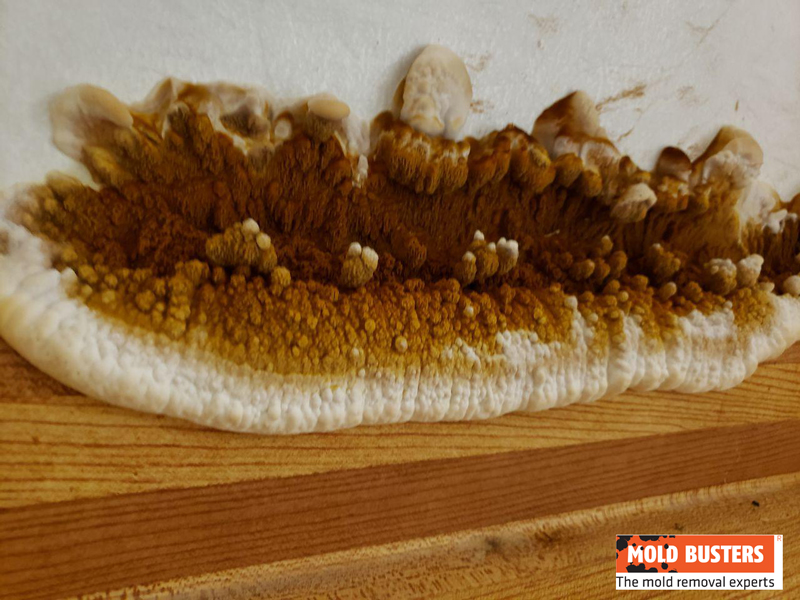 What is Serpula lacrymans?

Serpula lacrymans is a species of fungus that is well known for causing dry rot of wood in many buildings. It is highly destructive, spreading over wooden structures and degrading the cellulose in them. Serpula lacrymans is considered to be the most destructive and least controllable fungus in Europe mainly due to its ability to transport nutrients over long distances.

This fungus also grows in cooler areas of Japan, Korea, India, Pakistan, New Zealand, Australia, Mexico, Canada and the USA. In North America, Serpula lacrymans mainly occurs in the northern parts of the USA and Canada, while the similarly destructive American dry rot fungus Meluriporia incrassata is more frequent in the southern states and the Pacific Northwest [1].

Serpula lacrymans is well adapted to invade man-made structures. It can spread over great distances, not only by way of its reproductive spores but also by transportation of infected timber [2]. Colonization of wooden structures is rapid and is characterized by the formation of thick mycelial cords known as rhizopores. These root like structures serve to transport water and nutrients to distant parts of the organism. This is precisely why it is called “dry rot” – seemingly dry wood can be attacked as the fungus covers it. 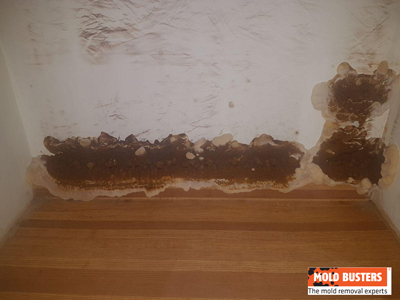 The fungus transports water from another source, enabling it to survive and begin eating into the wood. Still, the term “dry rot” is a bit of a misnomer, as a considerable amount of moisture is needed for a spore to germinate. Furthermore, the extent to which this fungus can transport water has been debated [1]. Interestingly, Serpula lacrymans has the ability to grow through damp mortar, masonry, and plaster, enabling it to infect wood that is cut off from the original site of infection [3].

Serpula lacrymans has a relatively low optimum growth temperature – about 20°C. It does not tolerate temperatures above 30°C for prolonged periods, and dies if exposed to temperatures of 50-70°C in wood [1].

These fungi possess a set of enzymes that allow them to break down and feed upon the cellulose in wood. Interestingly, Serpula lacrymans has a reduced set of wood decomposing enzymes when compared to its wild relatives [2]. However, this is not reflected in its capability for destroying wood, which is far greater than in any of its relatives.

Like all molds, Serpula lacrymans reproduces by forming spores. These smooth, cyanophile spores are produced in extremely large numbers (it is estimated that a 100 cm2 basidiocarp can produce 50 million spores in 10 minutes [4]) and are light enough to be carried by the wind, allowing them to travel across great distances.

Serpula lacrymans spores germinate at high relative humidity (over 95%) and when the moisture content in timber is over 30%. They are resistant to drying out and can remain viable for several years [5].

Unlike most other fungal spores, Serpula lacrymans spores are not major allergens. Even though they have been associated with allergic alveolitis [6], this species of mold requires cellulose in order to develop and is therefore not pathogenic to humans.

This fungus develops a mycelium of a tan to earthy brown colour. It spreads extensively with water conducting strands called rhizomorphs that can be up to 2cm thick and forms pancake like fruiting bodies that produce rusty red spores. As it degrades and removes the cellulose and hemi-cellulose from the wood, it leaves lignin behind, resulting in wood that is shrivelled and darkened. For this reason it is also known as brown rot.

As various types of dry rot can be difficult to distinguish, most modern methods of identification rely on molecular methods such as protein or DNA based techniques [1]. 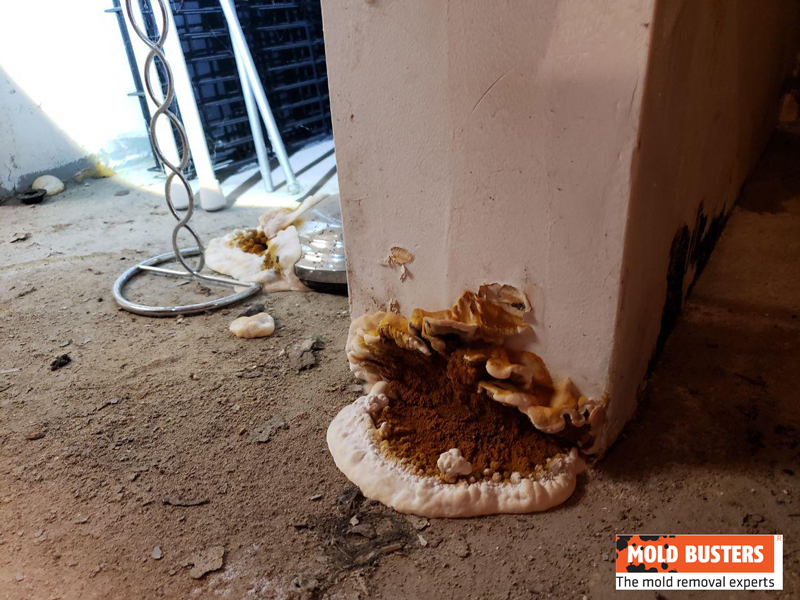 What are Serpula lacrymans health risks?

Not much is known about the health effects of Serpula lacrymans on humans. Understandably, most research focuses on its wood damaging properties. However, it has been associated with allergic alveolitis [6]. Also, as it brings in water from external sources, Serpula lacrymans can inadvertently provide an environment for other types of fungi, including those that are damaging to human health.

Studies of buildings damaged by Serpula lacrymans have shown the presence of a high diversity of molds, sometimes with high levels of fungal spores and even in rooms that were apparently undamaged by dry rot [7].

How to treat Serpula lacrymans?

A prerequisite for Serpula lacrymans treatment is to identify and correct any moisture related construction issues that may have enabled its development in the first place. Leaky roofs or guttering, inappropriate floor structure, dampness infiltrating the walls through contact with soil, inadequate draining, poor ventilation and any sort of plumbing issue can be risk factors for Serpula lacrymans development. It goes without saying that any treatment is pointless if these issues are not corrected, as the fungus will easily return, especially as the surrounding air is rich with its spores.

In many cases, performing these repairs will eventually get rid of the problem, particularly if the infestation was not a large one. If the timber and surrounding masonry are kept dry, the building is well ventilated and the temperature is kept relatively high, the fungus will slowly wither and die. However, in some cases the fungus must be actively removed by several methods.

Remediation attempts can be costly, especially in large buildings. In short, all infected timber has to be removed (along with an additional meter of healthy timber) and replaced. Any other infected materials must also be disposed of. Other methods of treatment include chemical treatment, heat treatment and even treatment with electromagnetic waves. There are also biological methods of control, specifically using Trichoderma or certain bacteria [1].

However, all of these methods have their drawbacks. Chemical treatments have been criticized as they can be hazardous to wildlife as well as any later occupants of the building. Heat treatment is often not feasible, as the energy requirements can be enormous, and the timber is often so thick that high temperatures cannot be achieved at the center without damaging the exterior.

Electromagnetic treatment is risky if there are metal screws and fasteners in the timber, and biological control using a sporulating mold like Trichoderma is questionable [1]. Therefore, any remediation decisions should be made on a case to case basis.

Most large Serpula lacrymans infestations occur in old or historical buildings, particularly if they have been abandoned, neglected or been subject to fire damage and then soaked to extinguish the flames. However, this fungus can occur in any building if the conditions are right, so it is best to keep moisture in check and to sort out any issues promptly. 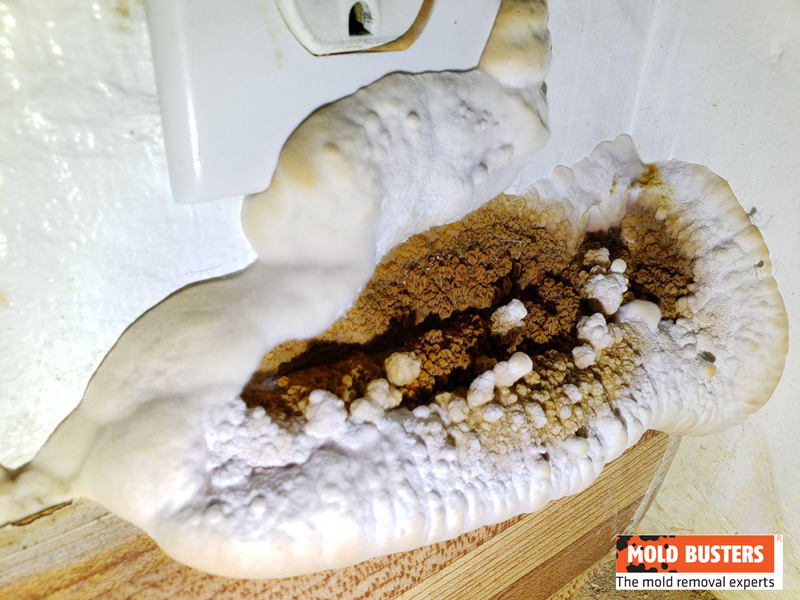 How to get rid of Serpula lacrymans?

Serpula lacrymans can cause a lot of damage and can be costly to get rid of completely. As with most things, prevention is easier than removal, so keep your house as dry as possible and fix any moisture related issues as they come up.

If you happen to have dry rot already, the first step is to have the mold properly identified, as this will influence the extent of the remediation. It is best if it is caught on time and can be killed by using environmental methods, i.e. drying out the area, lowering humidity and increasing ventilation.

It goes without saying that this is definitely not a fungus you should try to tackle yourself. It can cause extreme damage and making a mistake is easy. Any oversights when it comes to leaks or any other structural issues can easily put you back to square one.

In any case, if you see any wood damage in your home and are not sure if it is termites, dry rot, or something else, it is best to have it checked out as soon as possible. Mold Busters offer a comprehensive set of mold testing and removal services, and we have the knowledge and technology to identify and remove any type of mold. Call us today to book an appointment.

Only 11% of tested bedrooms in Canada didn’t have any mold type present?! Find out more exciting mold stats and facts inside our mold statistics page.