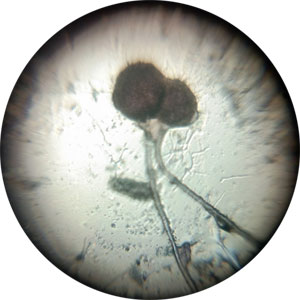 With today’s fast-paced lifestyle, it is hard to even notice what is going on around us. In an effort to maintain a high quality of life, we usually do not notice the constantly present but less visible phenomena that have a direct impact on our health.

So it is with molds. Living with such a large number of molds in our living spaces, even though we are not aware of it, it is very important to find out more about it and take preventive care.

Zygomycetes belong to the phylum Zygomycota or conjugation fungi, which includes molds. This class includes various types of fungi that can be found throughout the world.

Zygomycetes are economically important. Some of them are used in the fermentation of food products, while others are used for the production of enzymes, acids, and so on. [1] Saprophytic species of zygomycetes spoil our food while others are human pathogens.

Where can Zygomycetes fungi be found?

These fungi can be found practically everywhere: in soil, dung, grass, fibre, wood, decaying plant material, paper, textiles, indoor and outdoor air, hospitals, and occasionally in water-damaged buildings. Zygomycetes grow indoors on materials that are rich in cellulose, such as plasterboard, paper, paints, and fabrics.

These fungi are also commonly found in the digestive tract of aquatic larvae of a broad spectrum of insects, crustaceans, and other arthropods, which act as hosts for the fungi. [2] Rhizopus stolonifer, known as a black bread mold, is a common zygomycete. Decomposed bread, fruit, vegetables, and animals decay and create a black growth on its surface.

The name “zygomycetes” refers to spores with thick walls known as zygospores. Within this class, there are more than 800 species that are divided  into seven orders:[3]

Zygomycetes organisms belong to a unique group of conjugated fungi. Most have coenocytic hyphae with a fast-flowing cytoplasm. The primary component of their cell wall is chitin, and the primary storage polysaccharide in the cytoplasm is glycogen. There is a lack of any motile cells at any stage of their life cycle.

Zygomycetes are able to reproduce both by the sexual formation of zygospores and asexually by aplanospores (also called sporangiospores) or conidia.

Zygospores are formed through the complete protoplast fusion of two equal or unequal gametangium. [4] They remain dormant and protected by thick layers until environmental conditions improve. When conditions become favourable, zygospores undergo meiosis to produce haploid spores, which will eventually grow into a new organism. This form of sexual reproduction in fungi is called conjugation (hence, the term “conjugated” fungi).

Asexual reproduction of this fungi occurs through the spread of spores by animals or the wind.

What are the health effects of Zygomycetes?

Zygomycetes may adversely affect humans, animals, and plants. Those who are most sensitive are people with weakened immune systems.

Furthermore, any type of skin trauma, wound, needle, or burn may increase the risk of zygomycetes-related conditions, including:

There are two orders of zygomycetes-containing organisms that affect human health:Mucorales and Entomophthorales. Most human diseases are caused by Mucorales. [5] While diseases are most often associated with Rhizopus spp., other species have also been associated with human infection, including Mucor, Rhizomucor, Absidia, Apophisomices, Sakenaea, Cunninghamella, Cokeromices, and Sincephalastrum spp. Exposure to these mold spores can occur by inhalation, various percutaneous pathways, or ingestion of spores.

Mucormycosis, also known as zygomycosis, is a fungal infection that can be acquired by contact with fungal spores in the environment. [6] For example, lung or sinus infections can occur after slow, consistent inhalation of fungal spores. Forms of mucormycosis may occur in people who have health issues or are taking medications that reduce the body’s ability to fight germs and disease. [7] Infection may also develop on the skin after the fungus enters through cuts, abrasions, burns, or other skin wounds.

How to get rid of Zygomycetes?

If you have found mold growing in your home, you should clean the mold and repair any moisture-related issues (e.g. leaky pipes, roofs, or appliances) immediately. Humidity control in your home is also one of the most important factors in preventing mold growth. Depending on the size of the mold contamination and the level of damage, mold cleanup may or may not require professional help. Mold Busters can help—contact us today to learn about our wide range of mold removal and decontamination services.