Rhizopus stolonifer (known as common black bread mold) is classified as Zygomycota family Rhizopodaceae (Mucoraceae), genus Rhizopus. One of the most frequent fungi globally, even though Rhizopus is a cosmopolitan genus of 11 species of filamentous fungi, R. stolonifer is commonly found in subtropical and tropical regions. Like other members of its genus, R. stolonifer grows rapidly, mainly in closed, wet environments (indoor environments), and is a well-known and unwanted guest during harvests. As a decomposer in the soil, the fungus plays a significant role in the carbon cycle. 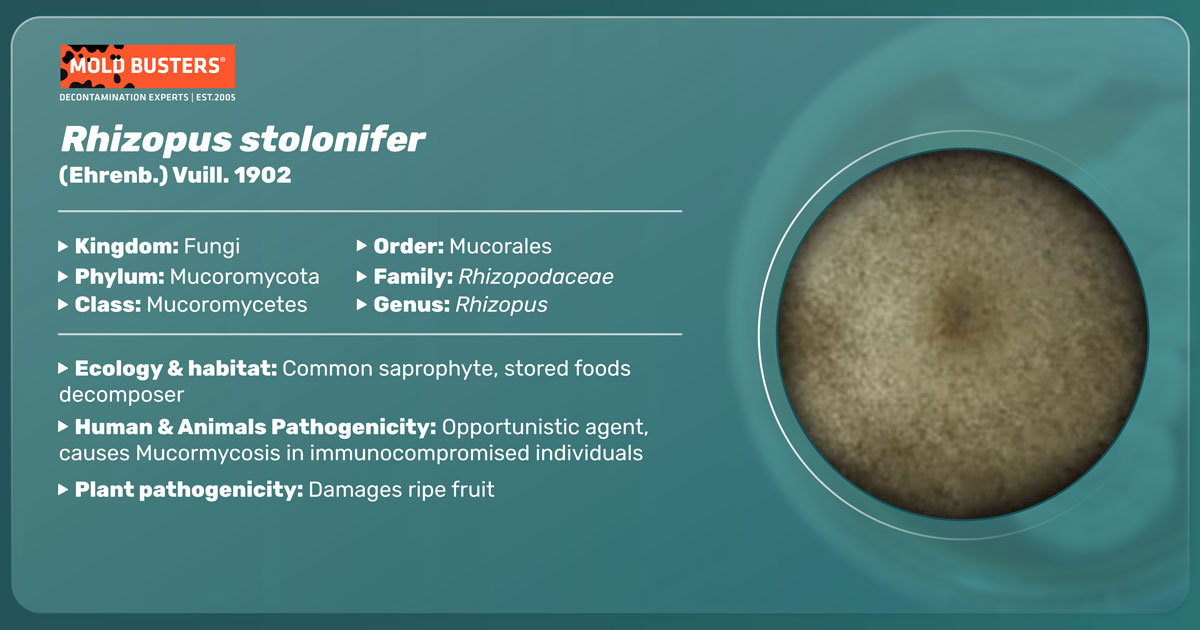 Where can Rhizopus stolonifer be found?

With large quantities of R. stolonifer spores in the air, the mold can rapidly form with the required nutrients on all surfaces. This specific fungus depends on starch and sugars, which it receives from organic matter, like bread and fruit, and uses them to grow, feed, and reproduce.

This mold thrives on temperatures between 15°C-30°C (59°F – 86°F), in a moist environment, which allows germination of the spores, achieving their full potential.

Rhizopus stolonifer is a saprophytic fungus. It is a heterotrophic opportunistic organism that obtains nutrients by absorption—also considered parasitic because it uses nutrients from other living organisms. The moisture of ripe fruit is the susceptible environment to this mold which allows it to spread fast. Although bread and fruit are the first places this fungus colonizes, there are other places on which we can find this mold. R. stolonifer also prefers dry and warm habitats like vineyards, other soil types, bird nests, etc. To achieve the capabilities it possesses, it first has to adapt to the occupied area.

How to identify Rhizopus stolonifer?

The disease symptoms that characterize R. stolonifer infection are damp areas quickly covered by either a grayish fluffy mass or a blue or yellow-colored coating on the substrate, forming a structure visible with the naked eye and appearing first as a cottony white structure then turns black on the surface.

Infection usually occurs during harvest and handling. Rhizopus stolonifer requires oxygen and moisture, which are widely available. The spores that are produced by this fungus are very abundant in the air around us. If the air in which R. stolonifer resides becomes limited, the spores that it produces will not spread; this would cause the fungus to stop growing altogether. As long as there are spores in the air and abundant air, the mold can grow and prosper on fruits, vegetables, and bread products.

They are pioneers on the stale bread, the first ones to appear. It can live in the air as well as in the earth (soil). They have a wide range of activities in the colonization of natural substrata; they are very tolerant towards variation and fluctuation of essential nutrients and their concentration and tolerant in the use of diverse forms of nitrogen and carbon.

R. stolonifer attacks mostly ripe fruits and vegetables, but the fungus can affect humans in some instances. Individuals with compromised immune systems such as those with AIDS/HIV and certain cancers can become infected. Mucormycosis (known as Zygomycosis) is a rare and severe disease that infects human blood vessels and can progress to other body areas, such as the lungs or brain. Infection is 50% curable, and its success is strongly affected by preexisting conditions.

How to get rid of Rhizopus stolonifer?

With the broad area of available hosts in which R. stolonifer infestation can occur, and its rapid colonization, controlling the disease has become an important task.

R. stolonifer can be controlled by using registered synthetic fungicides, such as:

can control this mold.

Some of the sanitizers have proven to be good against R. stolonifer:

Mold is also sensitive to SO2 (sulfur dioxide), ethanol, and heat to some extent. Still, it will not kill all cells because spores can survive long dry periods under relatively high temperatures.

To avoid crop losses, preventive fungicides are often sprayed postharvest, which is one way to stop the spread of disease, and also cold storage during transport can slow infection down or even prevent it.

As one of the primary decomposers in the soil, the fungus plays a significant role in the carbon cycle due to its ability to decompose organic material.

The spores are everywhere to be easily found in humid or hot climates such as vineyards on both the grape or in the soil. Having damaged berries, the spores floating around can easily infect and feed on the sugars of the berry and spread quickly. Using moldy grapes in making wine releases a significant ethyl acetate concentration, which gives the wine a volatile aroma. That is unpleasant and unwanted in wine.