With over 300 accepted species, the Penicillium genus includes some of the most frequently isolated molds in the world. Penicilli (the common name given to fungi from this genus) are saprophytic fungi common in soil, on decaying plant debris, compost, grains, and rotting fruit. Indoors, they can be found on wallpaper and house fabrics, house dust, and water-damaged buildings in general. (1,2) 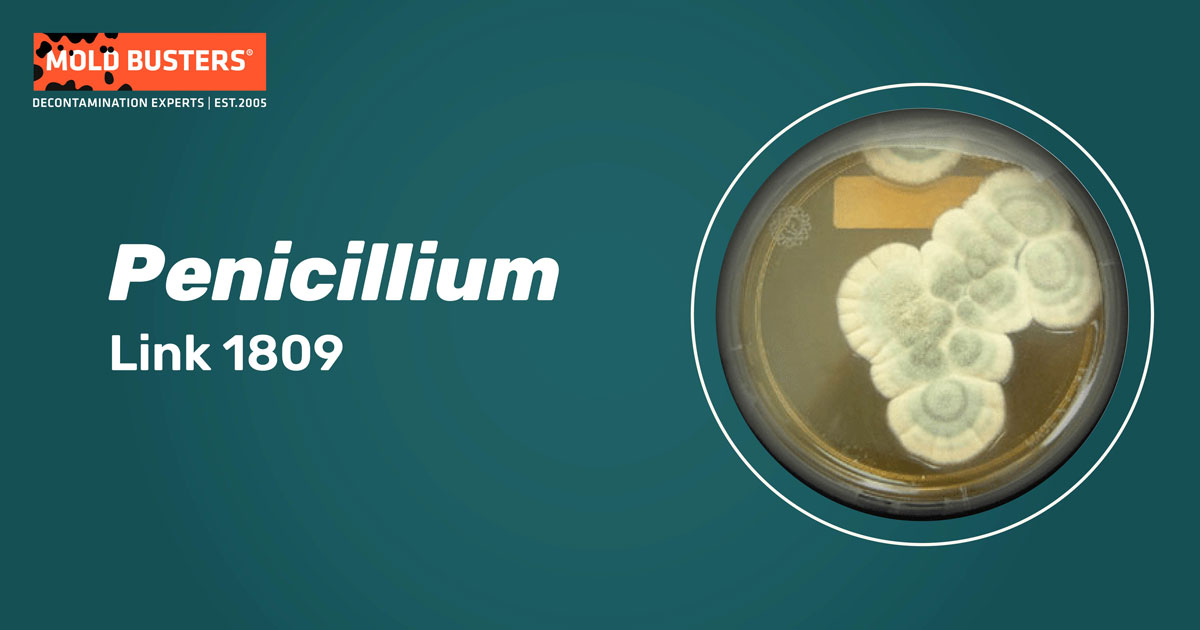 Penicillium fungi are common allergens, triggering such reactions as hypersensitivity pneumonitis and hay fever. It can also exacerbate asthma symptoms.

While Penicillium is typically non-pathogenic, there are a few exceptions. Some Penicillium species are capable of producing microbial volatile organic compounds (MVOCs) and toxins that can be harmful, especially upon long-term exposure. Their colonies range from blue-green to white, yellow, and pink with a velvety or powdery texture, and due to the production of MVOCs, some release a strong, musty odor. However, fungi from the Penicillium genus are also the source of the first produced antibiotic – penicillin (3,4).

Penicillin was discovered in 1928 by Dr. Alexander Fleming, who was a physician and bacteriologist at St. Mary’s Hospital in London, England. He was culturing Staphylococcus bacteria strains and one day noted that some of his bacteria colonies, left on the working bench, had strange green contaminations. Dr. Fleming realized that the mold, then considered the Penicillium notatum, had prevented the normal growth of Staphylococcus colonies. Today, we know that this organism was P. rubens (5, 6).

In March 1942, 14 years after the discovery of penicillin, Anne Miller became the first patient to be successfully treated with penicillin after she miscarried and developed an infection that led to blood poisoning and almost took her life at New Haven Hospital, Connecticut. (6)

At that time, no specified medications for bacterial infections existed, and many people developed blood poisoning. In addition to being the first person to suggest that Penicillium mold is capable of secreting an antibacterial substance, Dr. Fleming was also the first person to develop a concentrate of the active substance, penicillin, in 1928.

Dr. Fleming realized that the microbial inhibiting factor can be used in combating the causes of diseases such as scarlet fever, pneumonia, meningitis, diphtheria, and an important sexually transmitted disease of that time – gonorrhea. A lot of research was conducted over the next twelve years, during which he grew and distributed the original mold. Penicillin was introduced as an antibiotic 1940s during the Second World War, and since then, it has been recognized as one of the greatest advances in therapeutic medicine (6, 7).

The name Penicillium was derived from the fact that their conidiophores (asexual spores-bearing structures) have a close resemblance to a paintbrush (“penicillus” means painter’s brush in Latin). Today, there are over 300 accepted species of Penicillium.

Some of the most ubiquitous Penicillium species include P. chrysogenum (syn. P. notatum), P. purpurogenum, P. janthinellum, P. digitatum, and P. marneffei (syn. Talaromyces marneffei). The identification of some of these species can be based on their microscopic features and macroscopic colony morphology, but with some closely related species, molecular identification is more reliable (8, 9).

What is Penicillium mold?

Where can Penicillium be found?

Penicillium can be found practically anywhere, from air to soil and our homes. They can also grow on leather and textile items and are a strong indicator of indoor excess moisture. Like most other molds, If there is enough moisture and required temperature, Penicillium will grow. Fungi from this genus compete with genera such as Aspergillus and Fusarium.

The following results represent a part of our statistical analysis that describes mold infestations in common households. We tried to answer questions such as “Most common toxic mold types found in homes” or “Stats about mold types found in bedrooms“, and many more. For a more detailed analysis, please visit our Mold Statistics page.

As frequent agents of food spoilage, Penicillium molds can be hazardous to human health. This is because some species of Penicillium produce toxic compounds known as mycotoxins (10). More than thirty different toxic compounds have been isolated from Penicillium ssp. contaminated foods, both human and animal (11). It is, therefore, better to be safe than sorry and discard any food items showing signs of mold growth.

What are safe levels of Penicillium?

The Environmental Relative Moldiness Index (ERMI) is an indoor air quality testing method developed by the U.S. Environmental Protection Agency and the U.S. Department of Housing and Urban Development. It was designed as a reliable, standardized method to evaluate air quality and mold contamination of U.S. homes.

ERMI uses DNA-based technology to assess which dangerous mold species associated with water damage are present in tested households. It also tests the amounts of mold material (spores and hyphal fragments). ERMI also tests for certain mold species not connected with water-damaged homes but are also known to have adverse health effects. It can also give a value of their quantity.

Of thirty-six mold species from this list, seven belong to the Penicillium genus. These include Penicillium brevicompactum, P. corylophilum, P.crustosum, P. purpurogenum, P. spinulosum, P. variabile, and . These penicilli are associated with various adverse health problems, ranging only from respiratory irritations and allergens to more serious conditions such as opportunistic lung mycosis, pneumonia, and asthma (12).

What are the allergy symptoms associated with Penicillium mold?

Penicillium and most molds are prolific spore producers. These spores are released into the air and deposited on all household surfaces or linger in the air, where we can inhale them. Furthermore, spores are resistant to the lack of moisture and can survive in a dry state for many years (13). How each person reacts to the inhalation of Penicillium mold spores is unique. Some individuals may experience asthma symptoms or allergic reactions, while others may not feel anything. There is also the matter of cross-reactivity, where certain fungal proteins of non-allergenic species may trigger anaphylactic reactions due to structural similarities with Penicillium species (14).

We inhale thousands of fungal spores daily, and our immune system is more than capable to locate these structures and neutralize them in a normal manner. However, these spores may trigger a hypersensitive action in individuals prone to allergies. If you do have an allergy to Penicillium, your immune system’s response may induce symptoms such as itchiness and watery eyes, sneezing, nasal congestion, itchy lips, mouth, and nose, or a runny nose. With hyper allergies, these symptoms may worsen, leading to anaphylactic shock.

What are the health effects of Penicillium mold?

Penicillium fungi produce many mycotoxins with different adverse health effects. Some of them are Ochratoxin A, Rubrosulphin, Viopurpurin, Viomellein, Citreoviridin, Citrinin, Islanditoxin, Patulin, Penitrem, Viomellein, Rubratoxin, and many more. The production of these toxins can vary from trace amounts to ample production. These toxins may induce powerful biological reactions, of which continuous exposure (through inhalation or ingestion) could have harmful health implications. They can damage internal organs and have carcinogenic, teratogenic, Immuno-suppressive, and nephrotoxic consequences (15).

How to remove Penicillium mold?

Without a doubt, any identified mold should be removed from your home—the sooner, the better. Many molds are harmful to human health, especially to infants, those with respiratory conditions such as asthma, elderly people as well as those with poorly functioning immune systems.

To protect your health as well as the health of your family, removing mold from your indoor environment quickly and effectively is essential.

When cleaning mold, you should avoid exposing yourself to mold spores and mycotoxins. This is the reason why many homeowners decide to hire a mold removal professional to safely eliminate the mold problem. However, if you choose to do the mold removal work yourself, you must protect yourself with the appropriate safety equipment and follow established containment, remediation, and waste disposal procedures.

The following is a list of the personal protective equipment you should wear when cleaning mold:

How to prevent Penicillium mold from growing back?

Once you have removed all Penicillium molds from your home, you need to prevent them from growing back. Since mold spores are airborne, your home should be well ventilated with plenty of air circulation. This will reduce dampness and humidity, which are the key factor in any mold contamination. Using an air purifier and/or dehumidifier will also help reduce the relative humidity inside your home.

For persistent mold infestations, you should contact a mold removal professional. At Mold Busters, our diagnostic mold inspections and visual assessments often reveal hidden moisture problems that contribute to ongoing mold contamination and decreased indoor air quality inside of homes.

Call us today to book your mold inspection.