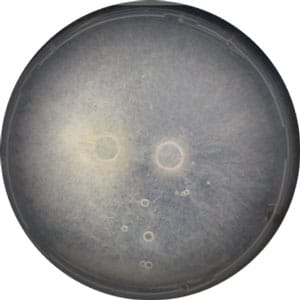 What is Mucor hiemalis?

Mucor hiemalis is classified in phylum Zygomycota, order Mucorales family Mucoraceae genus Mucor. All members of the order Mucorales, including our species M. hiemalis, have a wide variety of morphological appearances; they inhabit many ecological niches and have several different lifestyles, including saprobic, opportunistic pathogenic, facultative parasitic. They are of great importance in the biotransformation of chemical and pharmacological compounds.

Where does Mucor hiemalis live?

Mucor hiemalis is cosmopolitan, meaning they can grow in many different environmental conditions and geographical locations. This mold can cause spoilage on many types of food, including fresh and dried fruit, fresh vegetables, cereals, nuts, spices, and various dairy and meat products. This species can even thrive in refrigerators because they can grow in temperatures below 0°C (32°F) [1]. Mucor hiemalis is a psychotropic fungus that doesn’t grow on temperatures over 35°C (95°F) and pH below 4.5 with the optimum growth between 20°C-30°C (68°F-86°F) with pH around 6 [2].

For growth, M. hiemalis requires moist, nitrate-rich substrate and thiamin (vitamin B1), often found in citrus fruits. Symptoms on the fruit infected with M. hiemalis usually appear within two weeks. Small lesions (5 to 10 mm) develop around the initial wound, with light or dark brown coloration of the lesion. Decayed flesh is very watery, soft, and easily separated from the healthy tissue [4].

Like many other species from order Mucorales, M. hiemalis reproduces both asexually and sexually, often preferring asexual reproduction. This fungus is a heterothallic organism (sexes reside on different individuals), so to sexually reproduce, they need to find a compatible mate [5].

Mucorales are ubiquitous. These fungi are widespread and have been already isolated from soil, fruits and seeds, decaying vegetables. Some species of Mucorales are well-known as food contaminants. However, their presence can provide important information about the hygiene conditions of food deposits, faults in the storage process, and the mycotoxin contamination of grain feedstock [6].

Mucor hiemalis produces proteases. These enzymes account for 60% of all enzyme sales today. Some major uses of proteases are dry cleaning and detergents and food industry such as cheese-making or meat processing. Proteases are also used in pharmacies to produce digestive and specific medical treatments that deal with inflammations and virulent wounds [6].

A few species of Mucor are human pathogens. They are known to cause Mucormycosis, a rare, devastating, and life-threatening fungal infection, which attacks cutaneous and subcutaneous tissue and can cause systemic infections. Mucormycosis is a term used for infection caused by Mucorales generally. It is impossible to identify species within diseased tissue by the microscopic appearance of their mycelium. Diagnosis is conducted only with the identification and isolation of the suspected pathogen in culture, sometimes post mortem [7].

Several widespread species of Mucor have been associated with disease symptoms, including M. hiemalis, M. racemosus, and M. circinelloides. These are opportunistic infections from sporangiospores present in the air or soil and are usually jointed with individuals who suffer from other diseases such as leukemia, AIDS, diabetes, and post-operative conditions. There are no records of person-to-person transmission. Mucormycosis can be very serious, sometimes even fatal in immunocompromised patients. Serious cases can be successfully treated by combining medication such as amphotericin B with surgery, as heavily infected and necrotic areas must be removed to stop the spread [7].

Mucormycosis can affect different parts of the human body. According to the affected areas, Mucormycoses are divided to:

Some symptoms of pulmonary mucormycosis (lungs) are:

Cutaneous mucormycosis (skin) often looks like ulcers or blisters, and the infected area might turn black. Other symptoms include pain, swelling around a wound, warmth, or excessive redness [8].

Symptoms of gastrointestinal mucormycosis can include:

Other antifungal drugs used in mucormycosis treatment are amphotericin B, ketoconazole, itraconazole, and voriconazole [8].

With the increasing pollution of aquatic environments and the low amounts of available drinking water, developing effective water treatment alternatives is badly needed. An example is a highly released anthropogenic pharmaceutical xenobiotic called acetaminophen (APAP), which has been detected at high concentrations on the water’s surfaces. Today, water plants traditionally used for water treatment mainly were unable to remove all pharmaceutical xenobiotics. Additionally, the breakdown products of APAP are toxic [9].

Phytoremediation has successfully removed some xenobiotics efficiently with no toxic breakdown products; however, the range of their application is often quite restrained. With this in mind, the potential role of M. hiemalis in mycoremediation and its ability to degrade APAP compounds was investigated. The extracellular peroxidase activity of M. hiemalis was measured, exposing it to APAP. The findings concluded that M. hiemalis could be included in bioremediation systems for short-term APAP degradation with effective management [9].

According to scientific research conducted, the inflorescence (the complete flower head including stems, stalks, and bracts) brown rot disease of date palm trees in Egypt is caused by Thielaviopsis paradoxa. This disease is causing high losses in fruits yield productivity and pollen grains. M. hiemalis was recorded as non-pathogenic to this particular fruit and has shown antagonistic properties against T. paradoxa. In the study, M. hiemalis was able to colonize inflorescence and reduce colonization of T. paradoxa. The result shows the potential role of M. hiemalis in the biological control and suppression of T. paradoxa [10].