What is Cladosporium sphaerospermum?

Cladosporium sphaerospermum is a common airborne and cosmopolitan mold species. It belongs to the large group of Fungi called Ascomycota, which dominantly reproduce asexually through structured conidia. This simple manner of reproduction allows them to spread rapidly into new habitats. Like other members of the genus Cladosporium, C.sphaerospermum is frequently isolated from indoor and outdoor air and living and decaying organisms [1]. Cladosporium isolates were identified as a part of the human microbiome and were sometimes found to act as pathogens causing infections of the skin, toenails, sinuses, and lungs. Additionally, large concentrations of airborne spores of this species can cause allergic reactions, especially in individuals with asthma and other respiratory diseases.

On the other hand, this mold was also shown to have some valuable properties. It was demonstrated that C. sphaerospermum can even have plant growth promoting abilities. Tobacco and peppers plants treated with this fungi showed significant improvement in growth compared to untreated controls. For example, pepper flowered 20 days earlier and yielded 213 % more fruit than control plants. It was suggested that this mold could be used as a biofertilizer to improve crop yield [2]. 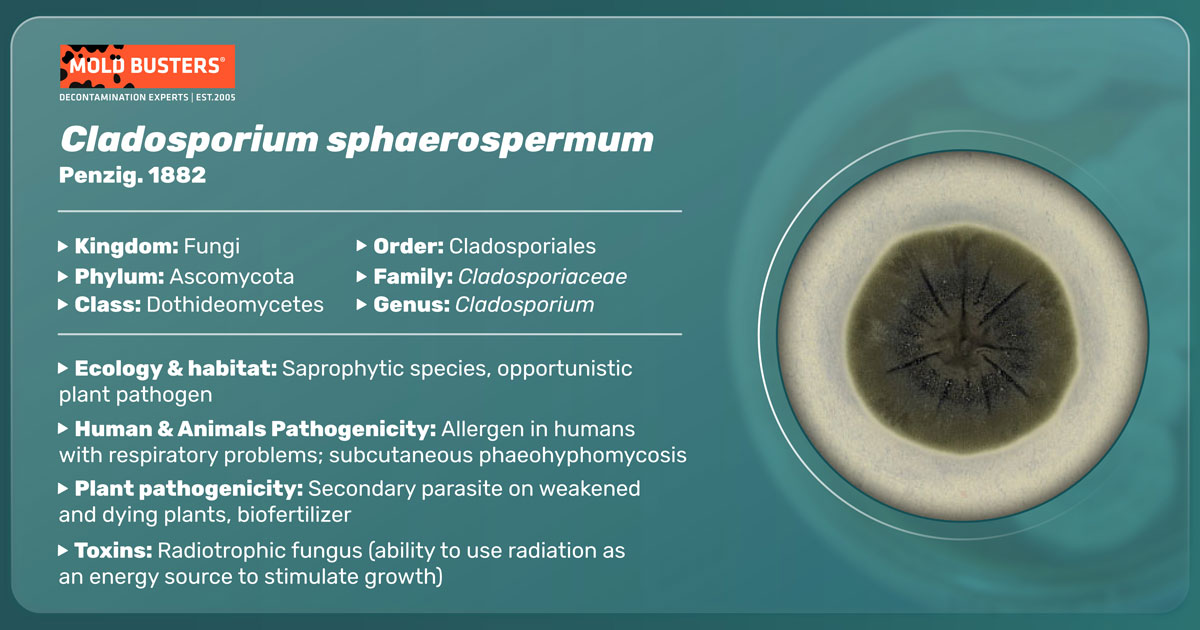 Remarkably, in a recent study, this species has been used as a test organism aboard the International Space Station (ISS). In a 30-days experiment, C. sphaerospermum was grown exposed to Space radiation [3], which can be compared to the life on the surface of Mars. The results proved that this fungus could thrive under such harsh conditions. This was probably achieved by utilizing pigment melanin to shield and harvest γ beams and translate them to chemical energy in a process called radiosynthesis.

Generally, colonies of Cladosporium sphaerospermum are darkly pigmented and usually flattened with a velvety texture [1]. This olive to brown color originates from the melanin produced by this mold and has a role in protecting against irradiation and competition with other species. Microscopically, C. sphaerospermum has branched, tree-like conidiophores with a length of 150–300 μm. The main conidiophore stipe is wide, 3.5–4 μm. Conidiophores are stalks that produce conidia, while the latter function as asexual organs of spore dissemination.

Contrary to other closely related species, conidiophores of this mold do not have enlarged nodes situated at the branching points. Characteristically, C. sphaerospermum conidia are globose with 3.4–4 μm diameter. The other conidia, ramoconidia, can also be found at the branching points joining multiple spore chains. However, distinct features, such as larger conidiophores and non-branched hyphae, were reported for some C. sphaerospermum strains, indicating morphological plasticity [4].

What is the habitat of Cladosporium sphaerospermum?

This mold is a cosmopolitan species that can inhabit many different ecological niches, growing at a wide range of temperatures and salt concentrations, and utilizes different food sources. It is mostly found indoors, with a tendency to thrive on moist, in bathrooms and kitchens if they are not properly ventilated. Due to its airborne nature, it can move and disperse quickly. Spore distribution by air allows easy colonization of many different substrates. Additionally, genome analysis suggested that this fungus can probably degrade different carbohydrate and protein complexes [5]. Besides some common habitats, such as decaying plants and soil, many other unusual habitats are reported: paint, textile, silicone, deep-sea, hypersaline water, dolphin skin, and even nuclear power plant in Chernobyl [1, 6, 7]. However, studies on molecular markers suggest that C. sphaerospermum isolates may belong to several genetically and morphologically distinctive species [1].

C. sphaerospermum belongs to the group of species commonly contaminating indoor environments. Although it has potential as a pathogen and allergen, it is poorly studied in the literature [5]. Rarely have there been reports of phaeohyphomycosis, a lethal fungal infection caused by this species, mostly in immunocompromised individuals. More commonly, mold exposure is correlated with different reports of asthma, wheeze, and allergic rhinitis [8]. Asthma is an inflammatory condition of the lungs, and its incidence is continuously increasing around the globe, posing a significant healthcare problem. Microbial communities (i.e., microbiomes) of lungs and intestines are now considered as asthma driving factors. Recently, different microbiome analyses revealed that both fungi and bacteria are implicated in asthma development. The microbial interactions between different life kingdoms probably have an essential role in the pathophysiology of this disease. In the future, the assessment of fungal dysbiosis may be a valuable tool in preventing and treating fungi-associated asthma. Alternatively, the development of mold-associated therapeutics to target specific immune responses triggered by fungi could improve the life quality of asthma patients. [9].

The presence of different indoor molds and the incidence of asthma has been the subject of several studies. Cladosporium, Alternaria, Aspergillus, and Penicillium molds were detected at higher concentrations and diversity in homes of asthma patients [8]. Recently, a study has shown that mold contamination was more present in houses of healthy controls than asthma cases in 83.3% vs. 52.2%, with a statistically significant difference. Therefore, the contradictory reports classifying C. sphaerospermum indoor exposure as one of the major asthma sensitizers [10] require additional studies with larger groups of asthma cases to confirm the allergenic potential of this species. Based on in vivo studies in a mouse model, it also seems that the host reaction triggered by this mold is not typical allergenic as expected but pro-inflammatory [11]. Interestingly, genome analysis of this mold detected a total of 28 genes predicted to be associated with allergy and among them genes that encode four class 1 hydrophobins which could be allergens specific to Cladosporium [5].