Wallemia sebi is one of the seven species of the genus Wallemia. It is the most frequently isolated and best-studied species of the genus (1). The species is adapted to low water activity and can be found living in diverse, harsh environments. It is capable of contaminating food preserved with high amounts of sugar or salt (2). This fungus can be isolated from various habitats (jam, dried fish, sea sponges, house dust, etc.) as its physiology is adaptable to different environments (3). Wallemia sebi produces several secondary metabolisms, of which some are toxic (2). It is a rare human pathogen, although it can cause severe allergic reactions. 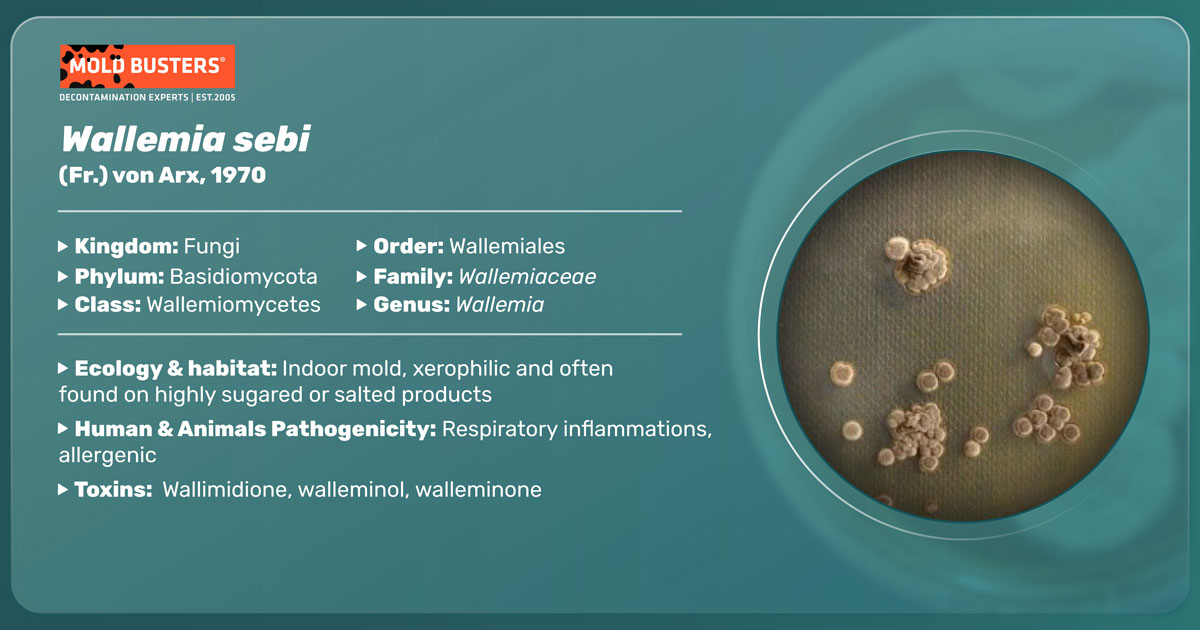 Indoors, it can grow on surfaces that have low water activity. Because W. sebi is a xerophytic species and requires small amounts of water to germinate, it can invade dried food products. It can be found on various foods such as dried and salted fish, jam, cakes, dried fruit, cereals, bread, milled rice (5). Additionally, as it is a xerophile, it is often found as one of the contaminant microorganisms of spices. It is also capable of infecting produces with high salt and sugar content.

In indoor environments, W. sebi can sometimes be found growing on wallpaper. Since W. sebi requires low water activity of the growing medium (0.65-0.85 aw), drying the walls and keeping the moisture at a minimum could prevent the growth of the fungus. W. sebi can also be found in abundance in household dust, on floors, carpets, and mattresses (6).

Limited data on the pathogenicity of the genus Wallemia is known as infections cases are rare and, so far, only reported on Wallemia sebi. The reports were of chronic ulcerative skin lesion (reported in the Netherlands), fatal livestock toxicosis associated with contaminated hay (reported in the UK), and subcutaneous phaeohyphomycotic (reported in India) (7).

Wallemia sebi is an important human allergen because it produces masses of easily disseminated spores. Chronic inhalation of spores from moldy hay, straw, or grains can be dangerous. This leads to the possibility of developing bronchial asthma or hypersensitivity pneumonitis (farmer’s lung disease) and can be combined with pulmonary fibrosis (7). Symptoms of this disease are dyspnea, cough, fatigue, headache, occasional fever, and night sweats. Symptom occurrence and intensity depend on the severity of the infection (7).

Ingestion of Wallemia sebi most commonly occurs via the respiratory system. Like most fungi, this one also produces millions of spores. Spores are very small and can easily pass into the lungs, and can cause respiratory problems. Another ability that makes W. sebi potentially dangerous is a layer of hydrophobins present on its conidia. Hydrophobins are small cell-wall proteins present on the surface of fungal spores which help pathogens avoid detection by the immune system cells by masking them (9).

The first mycotoxin isolated from Wallemia sebi is walleminol A. Scientists who isolated it in 1990 suggested that it causes toxic effects in the range of in vitro systems such as mammalian cell lines, protozoa, and brine shrimp (8). The production of walleminol A and other secondary metabolites depends on the medium the fungus grows, so there may be no mycotoxins in the food (5). Other toxins produced by this species are wallimidione walleminone, and the secondary metabolites azasteroids A and B. Azasteroids are, in principle, not toxic for humans. They have shown potential as antitumors, antiproliferative, and antimicrobial agents (7).