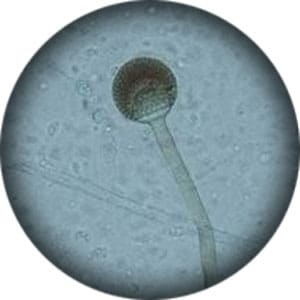 Rhizopus microsporus is primarily a fungal plant pathogen that affects corn, sunflower, and rice. However, the organism can also infect humans if one has an impaired immune system. It is also a frequent contaminant of foods, cutlery items, and in some cases, medication. R. microsporus is involved in bacterial symbiosis with Burkholderia sp. and cannot reproduce without its symbiont.

Colonies are fluffy and white due to areal mycelium, becoming grey or yellow‐brown with age. R. microsporus is a rapid grower, overgrowing the Petri plate within 4 days. Optimal colony growth is achieved at 37 °C, while after 40 °C, the growth is inhibited (1).

Its hyphae are hyaline, broad (5-15 µm), irregularly branched, and ribbon-like (Fig.1).  Sporangiophores (the thread-like structures bearing spore clusters) are up to 1000 µm in length, yellowish-brown, and generally unbranched. Sporangia (spore-bearing structures) are pear-shaped and 40-130 µm in diameter. Sporangiospores (spores) are slightly rhomboidal, 4-6 µm in length, and smooth (1,2).

Several other Rhizopus varieties (vars. microsporus, azygosporus, chinensis, oligosporus, rhizopodiformis, and tuberosus; ) were considered as separate species, based on morphological characteristics such as spore size, shape, and ornamentation. However, genetic data and no presence of sexual barriers among tested isolates showed these to only be the six varieties of R. microsporus (3,4).

Rhizopus microspores as a plant pathogen

Rhizopus microspores is one of the causal agents of the disease known as Rice Seedling Blight. The infection is manifested by the fast swelling of the seedling root system. The damage to the roots is caused by the toxin rhizoxin, which is produced by the bacterial symbiont Burkholderia rhizoxinica. The infection often kills the host, which is favored by the fungus and the bacteria, as they are both considered to be necrotrophic organisms and can feed on the dead matter. Rhizoxin damages the hosts’ cells by inhibiting cell mitosis and vegetative production. R. microsporus is resistant to the toxin due to an amino acid exchange in a protein responsible for polymerizing the eukaryotic cytoskeleton. The B. rhizoxinica bacterium is vertically transmitted from one fungus to another through the sporangia. None of the reproductive structures can be created by the fungus if the bacterial symbiont is lacking (5–7).

R. microsporus is also one of the causal agents of Rhizopus Head Rot of sunflowers. Host Susceptibility to disease is age-depended. Sunflowers are somewhat resistant if inoculated at the budding stages of plant development. However, if infected at the stage when the flowers open, the disease will fully develop. Initially, small, water-soaked spots appear on the back of the flower heads. As the disease progresses, spots expand, and the mycelia further penetrate and kill the cells within the flower head (Fig.2). Later, external masses of mycelia and dark sporangia appear. At this stage, the disease can be dispersed by wind, rain, and by birds. When the conditions are optimal for disease, the sunflower heads can rot in 3-7 days (8,9).

Rhizopus microspores as a human pathogen

Mucormycosis (previously referred to as zygomycosis) is a rare but serious infection caused by fungi (molds) from the group of mucormycetes. Studies suggest that Rhizopus microsporus is one of the most often causal agents of mucormycosis (2,10). The infection mainly affects people who are immunocompromised due to a disease or due to taking medicines that inhibit the immune system. It most commonly affects the sinuses or the lungs due to spore inhalation but can also occur on the skin due to injuries (10-11).

Rhizopus microsporus is hazardous for immunodeficient humans because it is a frequent source of food and medication contamination. In a study investigating an outbreak of intestinal mucormycosis infections due to R. microsporus in patients on treatment for hematological malignancies, air, food, and drug samples were tested for fungal spores. R. microsporus spores were molecularly confirmed in food, cutlery, and in 10% of tested renal medication tablets (11). R. microsporus can be tricky as a contaminant because it is thermotolerant and can survive even at 50°C (122°F). Gastrointestinal mucormycosis, caused by Rhizopus microsporus in clinical conditions, are not often reported. However, some cases or outbreaks of tongue, gastric, or cutaneous zygomycosis due to exposure to contaminated wooden tongue depressors have been reported (11-15). Standard treatment for Rhizopus microsporus consists of thorough debridement in combination with antifungal therapy, usually amphotericin B (16).