What is Acremonium strictum?

Genus Acremonium is a large and cosmopolitan group of filamentous Ascomycete fungi, including approximately 150 different species that are largely saprophytes, living on dead or decaying organic matter and contributing to the carbon cycle in the environment. Some Acremonium species occur as plant endophytes or plant pathogens, while some are animal pathogens, occasionally causing infection in immunocompromised humans (1).

Acremonium strictum is a common species, isolated mainly from soil and plants as well as indoor environments. This species is often found on moist, cellulose-based construction materials characterized by predominantly humid conditions (2). This species is a common fungal endophyte associated with a variety of grasses and the roots of maize plants and mangrove trees (3). 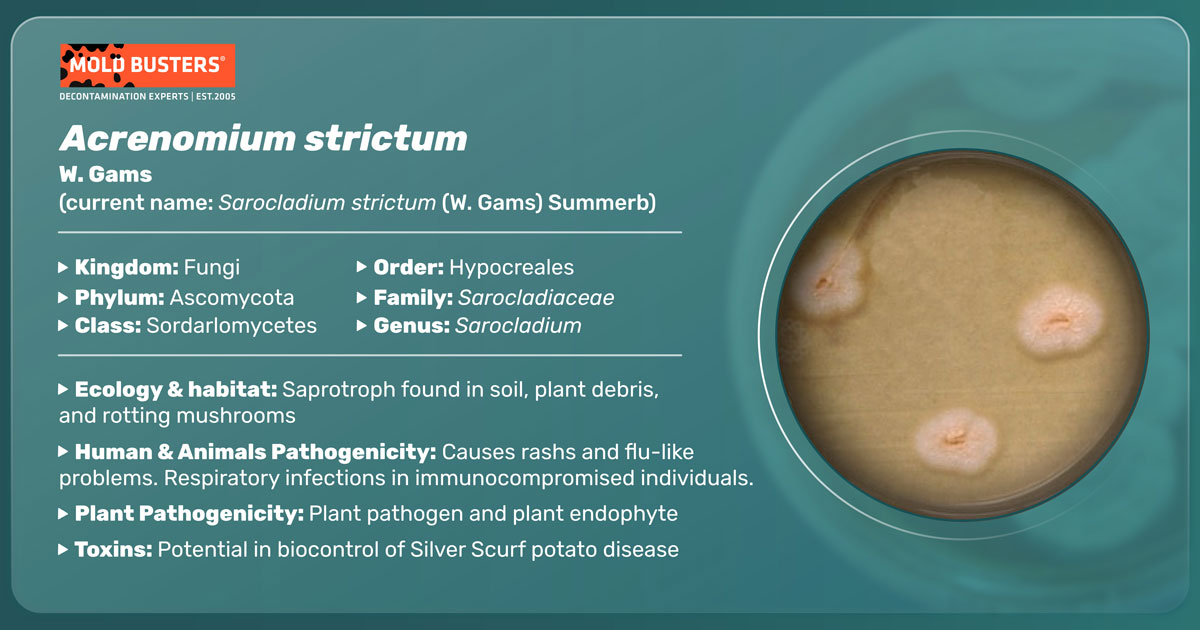 Genus Acremonium includes many slow-growing, anamorphous, thread-like fungi with a simple structure (4). A. strictum is characterized by solitary, aculeate phialides or weakly branched conidiophores that arise from the vegetative filaments and bear a wet cluster or dry chains of mostly one-celled asexual spores (conidia). The filaments are sometimes bound together into “ropes” of several cells in diameter (5). Acremonium strictum growing at 30°C on glucose-peptone agar forms about 50 mm of mycelium in 7 days. The colonies are flattened, smooth, moist and fuzzy, and sometimes form thin cotton-like masses. The color of mycelium ranges from light pink to orange but may also be yellow, white, or green (6).

Even though these molds cause allergic reactions and infections of lungs, skin, and urinary tract (A. strictum, previously Cephalosporium acremonium), they also produce substances (cephalosporines) that are used for treating many infectious diseases, similarly to penicillin from the fungus Penicillium notatum. However, unrestricted use of these substances may lead to the appearance of mold in the mouth or on the vaginal mucous membrane (8).

Acremonium strictum belongs to the group of fungi causing “hyalohyphomycosis”, a fungal infection caused by molds with basic tissue form of hyaline-based, pale hyphal elements that may be branched or unbranched and without pigments in their walls. This group includes widely distributed saprophytes such as Fusarium, Scedosporium, Scopulariopsis, Penicillium, Acremonium, and Paecilomyces (9). They contain agents that produce hyaline-based, septate mycelial elements with branched or intertwined hyphae. They cause various infections, mainly secondary infections that follow the primary ones (10,11).

In human patients, infection with these molds mostly occurs after the penetrating injuries, most commonly on extremities, but sometimes also in other body parts, such as the cornea (12). In the beginning, these infections are local even in immunocompromised individuals, but they are at risk of infection spread and creating systemic health problems (13). Cases of infection with species of genus Acremonium, including A. strictum, have been studied for several years. Unfortunately, the number of cases with infection caused by this type of mold has constantly been increasing, and there are also new, different types of infections.

Some studies have shown that in immunodeficient individuals with prior infections, this mold may cause serious ailments such as onychomycosis, otomycosis, and burn wound infection. Species of genus Acremonium also participate in creating and spreading infections such as pneumonia, arthritis, osteomyelitis, endocarditis, meningitis, and sepsis in immunodeﬁcient patients (12). There are several recorded cases of hyalohyphomycosis caused by species of genus Acremonium. One of the interesting cases includes cutaneous hyalohyphomycosis caused by Acremonium strictum in an immunocompetent patient (14). In newborns, infections caused by A. strictum are sporadic, but such cases have been reported. In one instance, after a fatal outcome, the autopsy has shown A. strictum hyphae in a newborn’s brain, liver, and heart (15). It is believed that the increase in the frequency of these infections is partially caused by the implementation of modern medical techniques and the appearance of new diseases affecting the immune system in humans (12).

After it was learned that A. strictum might produce enzymes that degrade lignocellulose (which constitutes the majority of plant material), it was later used in studies on biofuel production from degraded biomass. A particular strain of A. strictum (AAJ6) was used in that study, and it was proven that the genome of this mold species interacts with thermo-tolerant, industry-grade yeast to produce a higher amount of ethanol, while the time necessary for hydrolysis of cellulose decreases (16). Several different strains of A. strictum were used to elucidate its use in biomineralization processes, carbon cycle in nature, and production of CO2 (17).

A. strictum and many other species of genus Acremonium generally show resistance to most available antimycotics. However, it is still necessary to conduct studies to determine which combinations of antimycotics may influence the prevention or spread of infections caused by these molds. The most recent recommendations include the combination of amphotericin B and ketoconazole, as they have shown the best effects (18).

Just as in antibiotics used for bacterial infections, where many strains of bacteria now show significant resistance, it is necessary to search for new natural agents with antifungal activity continuously. It was determined in vitro that essential oils of certain plants (Cymbopogon schoenanthus, Hyptis spicigera, Lantana camara, and Ocimum americanum) inhibit the growth of mycelia in A. strictum as well as in other species of molds (Aspergillus niger, A. flavus, Cladosporium sp, Penicillium sp., Rhizopus sp., etc.) (19).

In everyday household conditions, it is necessary to perform preventive protection measures against molds, including A. strictum. It is necessary to minimize the time when open water containers are present, and rooms should be kept dry and well-aerated. It is advised to use a temperature and air humidity detector, especially in parts of an apartment or house where mold buildup is expected (bathroom, basement). If you suspect that Acremonium strictum is present, it is necessary to exterminate it immediately or call an expert.

And last but not least important: if you experience any permanent allergy or fungal infection symptoms, do not hesitate to contact your physician immediately.