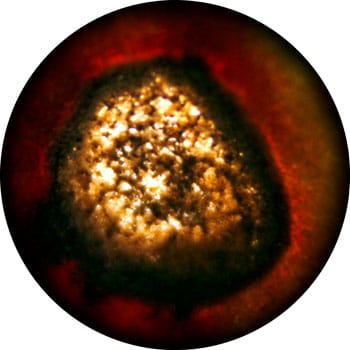 Cercospora sp. are fungal plant pathogens that cause Cercospora leaf spot (CLS) disease. Mostly foliar pathogens, they use wind-blown rain to disperse their propagules and infect nearby hosts. The genus is abundant and they infect all types of plants. Humidity and temperature are the most important limiting factors of CLS. Depending on the hosts and pathogen species, the damage caused can vary from only reducing quality to being an important yield reducer. Aside from fungicide application, proper crop management and planned planting are the best defense against this fungal pathogen.

The genus Cercospora is one of the largest in the fungal kingdom. The genus was established way back in 1863, and by 1987 it encompassed over 3000 species. This group is often referred to as Cercospora complex because it was segregated to several other genera based on host, morphological, and some other differences (1). Today, the genus Cercospora (proper) contains over 650 species (2). The name “Cercospora”, comes from a combination of the Greek “kerkok” (tail) and “sporos” (seed), a name that perfectly describes their elongated propagules. What most of Cercospora sp. have in common is that they are plant pathogens.

Cercospora sp. are mostly foliar pathogens and cause the disease Cercospora leaf spot. They invade plant leaves (or plant needles) through plant stomata, minute holes used by plants for gas exchange, and water transpiration. Interestingly, some of these species are also hyperparasites – they infect other fungal parasites (3). Some Cercospora species can also cause necrotic lesions on flowers, stems, or fruits, such as C. apii on winter squash (4,5). C. flagellaris and C. sigesbeckiae can also infect soybean seed, causing purple seed stain disease which significantly reduces seed quality (6). Species such as C. sequoia cause Cercospora needle blight of conifer trees. Even though this species has been recorded on more than 15 hosts, mostly seedlings and young trees succumb to the disease. Nevertheless, Cercospora blight possess a threat to conifer nurseries throughout Northern America (7,8).

Some plant species are more tolerant to CLS than others. Cercospora leaf spot of soybean, caused by C. kikuchii, only kills seedlings and plants at their earliest stages of development, while yield loss in mature soybean plants is negligible (6). On the other hand, CLS of sugar beet, caused by C. beticola, is considered to be the most destructive pathogen of this vegetable worldwide. This makes C. beticola an economically important pathogen as sucrose derived from sugar beet constitutes one‐third of world sucrose supplies (9). Furthermore, CLS puts additional economical strain on farmers and customers as the control of CLS by extensive fungicide application and other measures adds to the production costs of this vegetable (10). Grey leaf spot of maize is one of the most significant yield-limiting diseases of corn globally. It is caused by two Cercospora sp. pathogens, C. zeae-maydis and C. zeina. Grey leaf spot outbreaks are most often the result of low sunlight, poor airflow due to overcrowding, bad soil nutrition, and poor soil drainage of corn cultures (5,11).

Most Cercospora species have elongated, septate conidia (spores) and are usually dispersed by rain-splash and wind. Cercospora leaf spot of sugar beet spreads in this manner. Under humid and warm enough conditions, conidia will start to form on an already infected sugar beet leaf. Fruiting bodies of the fungus (caespituli) are visible as turfs of conidiophores, often with a velvety surface (3). This species needs more than 90 % relative humidity (or leaf wetness) and temperatures above 16 °C (60 °F) for sporulation (conidial formation) (12). When a droplet of rain falls on the infected leaves, the conidia are picked up by the ricocheted water splash and transferred on the leaves of the adjacent sugar beet foliage. The conidia will then sprout hyphae and grow toward the leaf stomata. Hyphae are thread-like structures that form the mycelium – the body structure of all fungi. Hyphae then penetrate the stomata, enter and degrade the intercellular leaf space and absorb nutrients. These nutrients will then be used for the further colonization of the plant and for the production of fruiting bodies that will serve as infection reservoirs for the surrounding hosts (13).

Cercospora sp. utilizes mycotoxin called Cercosporin for degradation of the host’s tissue. Cercosporin is distinctive among the other fungal toxins, as it a photosensitizer-type molecule and needs sunlight for activation (13). When cercosporin absorbs light energy, it becomes activated and reacts with nearby oxygen molecules turning them into activated oxygen. This type of oxygen is highly volatile, it reacts with lipids, proteins, and nucleic acids, thereby destroying host cells and severally damages the tissue. Interestingly, the fungus can withstand the destructive properties of its toxin by producing high quantities of pyridoxine, also known as Vitamin B6. Pyridoxin acts as an antioxidant, by reacting with activated oxygen and shielding the mycelium from harm (5).

CLS usually starts as minor decorated areas that can appear on both sides of leaf surfaces. As the infection progresses, the discolorations turn into leaf spots with more and more pronounced edges. If discolorations or lesions are not visible during the infection, fruiting bodies of the fungus can be spotted on the undersides of the leaves. Furthermore, and depending on specific conditions, caespituli can appear on either or both sides of the leaves. As the infection progresses, lesions may coalesce causing large necrotic areas, sometimes engulfing the entire leaf surface. At any stage, foliage may curl, wither and die off (3,5,13).

The color and size of lesions may vary depending on the pathogen species and hosts. CLS of sugar beet is distinguished from similar lesion-forming pathogens (such as Alternaria sp. or Phoma sp.) as their lesions are significantly smaller in size and form black conidia-bearing structures in the center of lesions. Also, due to inflected damage by the CLS, the infected vegetable cultures may give off the appearance as burned, when observed from a distance. Bean Cercospora leaf spot, caused by the pathogen C. canescens, produces 1 cm (0.4-inch) lesions with reddish-brown margins, with yellow halos. Lettuce leaf spot lesions are distinguished as they are formed with whitish centers (5,12).

The majority of Cercospora species have no sexual stage and reproduce by cloning. Therefore, most Cercospora leaf spot infections are achieved via asexual conidia. Several species that do have defined sexual stages belong to the plant pathogen genus Mycosphaerella (1,14). Fungi tend to have sexual and asexual stages, wherein sexual reproduction, mating occurs between two compatible individuals. The resulting offspring are the product of sexual recombination of the parent genetic materials. On the other hand, asexual or vegetative reproduction means that a single individual is copying itself through the production and dispersal of asexual spores called conidia. Both stages are very important for fungal plant pathogens, such as Cercospora, as sexual reproduction produces novel variants (genotypes) of the fungus which can sometimes be hardier or more virulent than their parents. These successful genotypes can then be multiplied (copied) and dispersed through asexual reproduction (15,16).

Apart from fungicide application, successful managing CLS comes down to the right vegetable, crop management, crop hygiene, and planned planting. Choosing a resistant variety is most often the most efficient, cheapest, and the simplest way to slow down or avoid CLS outbreaks. Although resistant plant varieties might also display some infection symptoms, the overall yield reduction will be significantly smaller. Planned planting time has proven to significantly reduce CLS damage because crops can reach a certain maturity stage before weather conditions become favorable for CLS development. Also, because fallen, infected leaves serve as infection reservoirs, burring or debris removal will lower the overall conidia count and reduce the disease pressure on next season’s crops. And finally, crop rotation is a good way to reduce the amounts of initial Cercospora sp. inoculum and improve the overall nutrition profile of the soil (5,13,17).

Finally, Cercospora leaf spot doesn’t need to only be bad news and it just might prove to be useful. Water hyacinth is an extremely invasive water plant species that endanger waterways worldwide by depleting native water flora and fauna from space, food, and oxygen, and clogs up water canals and river tributaries. Cercospora rodmanii can potentially be used as a biocontrol agent, as it is specific and virulent to this invasive plant and in combination with other biotic and abiotic agents can significantly slow down and reduce the growth of water hyacinth populations (18,19).