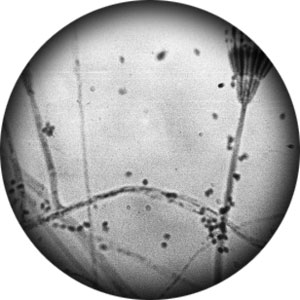 The only known vascular wilt disease of wheat and grasses is known as Cephalosporium stripe and is caused by the fungal pathogen Cephalosporium gramineum (syn. Hymenula cerealis Ellis & Everh.). This organism is one of the economically most important pathogens of winter wheat. It also infects other winter cereals such as oats, rye, and barley. C. gramineum is a facultative parasite and infects its hosts through the wounds of the root system and can be occasionally transmitted through seed. It reproduces asexually and is favored by moisture, low temperatures, and low pH levels of the soil. The disease is best controlled by planned planting and cultural practices.

The most recognizable symptom is the striping of the plant’s leaf blades (Fig.1). One to three chlorotic yellow stripes, often containing a central brown stripe, appear on the blades and continue to grow on the stems and sheets of the leaves (1). If the disease pressure is strong from high amounts of surrounding inoculum, mosaic chlorosis, wilt, and death may occur in seedlings. Plant stems will turn darker in color as the infection progresses. The plant becomes stunted in growth and prematurely produces a seed that is light and often shriveled and sterile. If the disease has spread enough, the infected field might appear to have a “double canopy,” with taller healthy plants and shorter, infected plants (1–3).

Fruiting bodies appearing on the cereal debris are loosely tied and are easily dislodged when disturbed. In appearance, its fruiting bodies – sporodochia are up to 1 cm (0.4-inch) in diameter, yellow-brown in color, raised and glistening with masses of conidia emersed in mucus when wet (4).

During spring and summer, the fungus acts as a systemic vascular parasite, living in the xylem vessels of the host. The primary function of the xylem is the transport of water and nutrients from roots to stems and leaves of the plant. The conidia of C. gramineum enter the plant from the wounds on the root system, start to germinate. During spring, the fungus starts to grow, move upwards, and colonize the stem and the plant’s leaves (1–3,5). The pathogen achieves this through the exploratory growth of hyphae – the unicellular thread-like structures that form the mycelium – body structure of all fungi. Transmission of the pathogen through the seed harvested from diseased plants is low. Still, it can serve as a source for pathogen introduction and epidemics initiation in areas where the pathogen has not previously occurred (6).

During the late autumn and winter months, C. gramineum survives as a saprophyte on wheat debris. Here, sporodochia are formed, on which asexual spores (conidia) are produced (2). Saprophytic fungi are those that live on and digest dead or decaying organic matter. This stage of the fungus is often referred to as Hymenula cerealis, which is also still used as a synonym or a current binominal name for the organism (3,7). H. cerealis conidia can survive on undisturbed plant crop residue for up to three years. During cool and wet periods, sporulated conidia are washed away by rainwater into the root zone of the soil. In this zone, conidia enter the plant through the wounds caused by soil’s mechanical activities, insects, nematodes, or frost wounds. The conidia then germinate, migrate and colonize the rest of the plant and start their parasitic life cycle (1–3,5). The sexual stage of this fungus has not yet been reported.

Cephalosporium gramineum produces the toxin Graminin A. This substance has a two-fold activity – phytotoxic and antibiotic. Phytotoxicity means it is toxic to the plant and helps the pathogen colonize the host by blocking the vascular tissue. By acting as a wide spectrum antibiotic, Graminin A also helps C. gramineum to survive in its saprophytic stage by limiting the growth of its microbial competition that resides on plant debris (3,8).

Cephalosporium gramineum evolved to use and prefer cooler temperatures and moisture. Temperatures ranging from 5–10 °C (41–50 °F), coupled with autumn rainfall, are favorable for conidia production and will result in ample inoculum amounts. On the other hand, late spring and summer temperatures, especially during dry periods, will stifle sporulation. For example, during September, up to 100.000 conidia per gram of dry soil weight can be detected, while less than 5.000 pathogen propagules can be detected from May to July. Cold winter conditions also favor the pathogen infection as the frost heaving, and frost damages caused by the freezing soil temperatures induce more wounds on the plant’s root system through which the pathogen can enter (2,4). The low pH levels of the soil are also beneficial for disease development (9).

Winter cereals, also called winter grains, are cereal crops that are sown in the autumn, can survive winter under thick snow cover, and continue their life cycle in the spring. Because cultural practices such as early seeding of winter cereals in the fall promote the development and growth of Cephalosporium wheat stripe, this pathogen is a limiting factor in many winter wheat production areas globally. Experiments have shown that grain yield loss of wheat due to this disease can be up to 41%, while in some susceptible cultivars can be as high as 85% (2,10).

Chemical control of Cephalosporium stripe through fungicide application has not been proven to be the most effective suppression method. On the other hand, delayed sowing is one of the simplest cultural methods that can render the disease development because early seeding gives the plant more time to develop an extensive root system. More developed roots are prone to more mechanical damages, which means that the pathogen conidia have more entry places. Moreover, increased and untimely fertilization also increases the root system surface, so spring fertilization is recommended over the autumn.  Destruction or removal of the leftover straw debris can significantly reduce the disease development, as it removes the amounts of infectious inoculum. Also, increasing soil pH levels by adding lime cerates more unfavorable conditions for the pathogen and can reduce the severity of the disease. Growing genetically resistant cereal cultivars may offer the best protection from the Cephalosporium stripe disease; however, successfully resistant cultivars are yet to be developed for all cereal species (1–3,9).