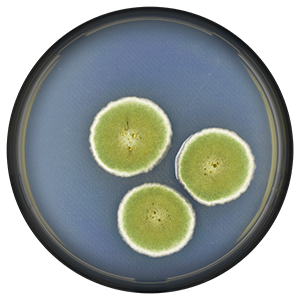 Aspergillus unguis is a cosmopolitan saprophytic mold species , and it is the asexual state of the Emericella unguis. Since fungi were mainly classified according to their reproductive structures in the past, the asexual and sexual reproductive stages of fungi were often considered two different species until the implementation of molecular methods of identification. These analyses are primarily done by comparing the DNA sequence of the internal transcribed spacer region or ITS region, which is the main sequence used to differentiate fungal species (1, 2).

The scientific classification of A. unguis is as follows:

The Nidulantes group is further divided into clades based on ITS, β-tubulin, calmodulin, and RNA polymerase II subunit gene sequences. Aspergillus unguis is classified into the A. unguis clade based on this phylogenetic analysis. The clade consists of three species, which are A. unguis, A. croceus, and A. israelensis (3).

Aspergillus unguis colonies are white or light yellow in the earlier development stage but attain a light green color with the development of conidia, which are asexual spores (Fig. 1). The edges or margins of the cultures are whole and smooth, while the texture is fuzzy or velvety (3). The temperature limit for their growth is 40°C, in the case of A. unguis, or 37°C, for A. croceus and A. israelensis, while the temperature optimum is from 27°C to 30°C.

Where can Aspergillus unguis be found?

Aspergillus unguis is a ubiquitous saprophytic species. It can be isolated from marine ecosystems, soil samples from tropical areas (3 – 7). It can also be found in forests and wetlands (8). According to the GenBank database, certain samples have been isolated from shoe leather in the USA and air samples from a factory in Austria (3). There are also cases of A. unguis isolated from residences. It has been identified as a common fungus in homes of asthmatic children in Detroit (9).

Aspergillus species are known to appear in water-damaged houses and grow on indoor plants. Since Aspergillus species can cause respiratory health problems, especially in immunocompromised individuals, it is important to be vigilant in case of any suspected fungal contaminations of home environments (10).

To date, reports of A. unguis infections are rare, and it is uncertain whether it can be considered pathogenic. On the other hand, A. unguis is one of the primary mold species isolated from homes of severely asthmatic children, as found in one survey (9). In this study, A. unguis was detected more often in severely asthmatics households than non-asthmatic households (71% versus 52%). If larger concentrations of fungi are inhaled, they can cause serious illnesses, especially in immunocompromised patients. These diseases include invasive pulmonary aspergillosis, aspergilloma, asthma, pneumonitis, and allergic bronchopulmonary aspergillosis (10).

Serious health issues are caused mainly by toxic secondary metabolites produced by Aspergillus species, called mycotoxins. The most significant mycotoxins secreted by Aspergillus species (and fungi in general) are aflatoxin, gliotoxin, and ochratoxin A (10). Although there is no evidence that A. unguis can cause human infection or produce these mycotoxins, it is recommended to exercise caution in case of contact with the fungus or in case of contamination of living areas.

Aspergillus unguis produces several potentially industrially beneficial secondary metabolites. One group of those metabolites is depsidones, which have shown potential as a new treatment for breast cancer. Additionally, depsidones have also exhibited herbicidal and antibacterial activity and inhibitory activity towards HIV integrase (4, 5, 7).

This fungus can also inhibit the growth of Staphylococcus aureus, a very important and dangerous opportunistic human pathogen. Certain strains of Staphylococcus aureus are also known as MRSA (methicillin-resistant S. aureus), a bacterium usually associated with hospital infections that have developed resistance to most antibiotics, primarily β-lactam antibiotics (6).

Another significant product of A. unguis is a group of compounds called sesterterpenoids. These compounds possess antimicrobial and anti-HIV activity, as well as anti-inflammatory properties. They have also exhibited mild and selective cytotoxicity towards some human cancer cell lines (colon, brain, and liver cancer cell lines) (11).

Finally, A. unguis produces β-glucosidase, an enzyme industrially used for breaking down cellulose biomass into glucose and other organic products. The activity of this enzyme is generally regulated by the concentration of glucose, a product that is created in the reaction controlled by β-glucosidase. Once the concentration of glucose increases in the chemical solution or the cytoplasm of a cell, it begins to inhibit the enzyme’s activity. This process is called a negative feedback loop. Interestingly, the β-glucosidase isolated from A. unguis has been found to possess high glucose tolerance, which means that the enzyme remains functional and active for a longer time before the product of its reaction begins inhibiting it. This suggests great potential for the use of this enzyme in industrial biomass conversion (12).