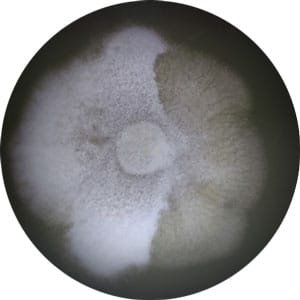 Schizophyllum commune, commonly known as Split-gill fungus, is the most famous species of the order Schizophyllales, which belongs to the phylum Basidiomycota. This wood-decaying fungus is ubiquitous, inhabiting every continent except Antarctica, where there is no wood to serve as a substrate [1]. It is also one of the most intensively studied macroscopic fungi globally due to its both therapeutical and harmful properties [1, 2].

The fruiting bodies of S. commune are fan-shaped, often gregarious, 1-6 cm wide and is, whitish-gray, hairy, and stemless (Fig.1) [1]. Its flesh is inedible, thin, and tough.  Gills on the underside are sparse and white to cream [1,3, 4]. Fruiting bodies can be found in clusters on branches, stumps, and logs, with the ability to curl up when dry and rehydrate and release basidiospores when conditions are favorable [1,4]. This is an adaptation to an arid climate with sporadic rains that ensures successful reproduction under unfavorable ecological conditions [1]. Spores are formed on basidia. Each basidia contains 4 cylindrical basidiospores, making the white spore print [1,3]. Spores and 3-4 x 1-1.5 µm in size, smooth walls, and lateral scar at the lower end [5].

S. commune is a cosmopolitan fungus often found on the bark of dead trees and the dead branches of living trees (Fig. 2). The species causes white wood rot [1, 6]. Due to its invasive nature and ability to colonize wood faster than other wood-rot fungi [1, 6], many researchers consider it a plant pathogen. However, others recognize S. commune as a saprophyte since it colonizes already wounded wood [6].

Gastronomic and medicinal properties and its resilience to high temperatures make S. commune a very popular food in tropical regions and countries in Asia and Central America. Commercial cultivation of these edible mushrooms has sparked a huge interest in recent decades. In an attempt to find the most economically suitable and environmentally friendly growing media for the cultivation of S. commune in semi-controlled conditions, a wide range of substrates is reported. Substrates are often agricultural by-products, including sawdust of several different wood species [7], banana and coconut leaves [8], pine shavings, dry coffee pulp, maize cobs and stalks, oat and wheat flours, and sunflower shells [9].

The polysaccharide schizophyllan, derived from S. commune, is one of the first three biologically active compounds isolated from medicinal mushrooms [10]. Biologically active polysaccharides are among the most useful obtained from mushrooms since they are very effective in slowing various cancers and other diseases. Their mode of action is based on stimulation of the immune system, making them a far less aggressive option in treating tumors compared to medicines that are destructive to cells. Having cell-level regenerative effects, mushroom polysaccharides, including schizophyllan, reduce the side effects of chemotherapy and radiation therapy [10].

Schizophyllan is now widely used for the treatment of cervical cancer [10]. According to some authors, the consumption of mushrooms with biologically active polysaccharides appears to be helpful in cancer prevention and growth [10].

Numerous studies have demonstrated that regular intake of medicinal mushroom species as a functional food is helpful in both preventing and curing specific illnesses, owing to their immunopotentiation, antibacterial and antioxidant activities [10, 11].

Although S. commune is considered a great source of nutritive and pharmacologically important compounds, this fungus is one of the most common basidiomycete fungus that causes infections in humans [1, 12]. This fungus can induce various symptoms, ranging from allergic responses to invasive infection, although it is most commonly associated with respiratory infections. Broncho-pulmonary infections and sinusitis account for more than 90% of all cases reported worldwide. Besides respiratory infections, S. commune can cause serious ocular, auricular and cutaneous infections, ulcerative palate lesions, meningitis, abscesses, and fungemia [1, 12].

S. commune [12]. Infection may stay localized or spread from the initial location to other tissues and organs. Spreading of infection depends on numerous factors such as the host’s immunological state, deviation of the nasal septum, usage of corticosteroid treatment, and length of exposure to spores [12]. In immunocompromised patients (mostly patients with underlying diseases including leukemia, lymphoma, myeloma, and diabetes), S. commune tends to cause invasive infections like brain abscesses which can be fatal [12, 13]. However, these kinds of infections are rare.

It is the opinion of some studies that this fungus should be considered in the differential diagnosis of individuals with chronic sinusitis who have failed to respond to conventional treatment [13] Due to lack of familiarity with this fungus and the difficulty of many laboratories in identifying this basidiomycete, infections caused by S. commune are likely to be misdiagnosed or not identified at all [12, 13].

Considering its omnipresence and invasiveness, S. commune may be causing many more infections than previously assumed. In some chronic infections, surgical interventions are necessary to remove fungus so the identification and susceptibility tests can be performed [12. 13].

The successful treatment of the infection should include preventing and eradicating fungal colonization in the airway, controlling infections caused by fungal exposure, and removing any mucus plugs from the airway [14].

To avoid such complications, the effective management of the fungi from the environment should be performed by competent and equipped professionals, especially during and after humid seasons when the spores of S. commune are abundant in the air.