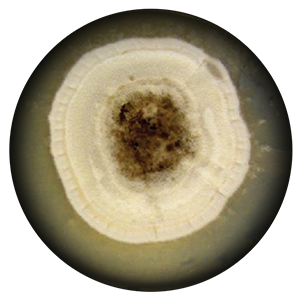 Pithomyces is a large genus of the order Pleosporales which belongs to the phyllum Ascomycota. Its species commonly live as saprophytes, colonizing decayed plant material, but can be also found in soil and air [1, 2]. Pithomyces chartarum has been isolated from mammals such as sheep, cattle, goats, and deer, but also from humans [1, 2]. This species is pathogenic, causing various disease symptoms [1, 2]. Pithomyces species are classified as dematiceous fungi [2], which means they are typically dark coloured when grown in culture, due to melanin production in cell walls.

The genus Pithomyces comprises more than forty species, widely distributed in nature and isolated mostly from diverse plant material [1, 2, 3, 4]. Clinically important species is P. chartarum, while species P. sacchari and P. maydicus have also been isolated from specimens including cutaneous, nail, respiratory, and nasal samples [1, 2, 3, 4]. P. chartarum is the only species of the Pithomyces genus with a known sexual stage, while other species are considered mytosporic (they reproduce asexually). The sexual stage of P. chartarum is labeled under the name Leptosphaerulina chartarum [1, 2].

Pithomyces species form fast-growing colonies, maturing in about five days. On Sabouard dextrose agar, colonies are cottony, white to cream or olive, suede-like, with a center that turns darker with age (Fig. 1). The reverse is golden with a dark center [1, 2, 5]. Colonies on potato dextrose agar (PDA) are grey with a dark center (Fig. 2) [5].

Hyphae are septate, pale to light brown [4]. Conidiophores are olive and smooth and short, arising laterally on the hyphae and forming peg-like branches [3, 4]. Conidia are single, ellipsoidal, yellow to dark brown, rough, and cross-septated, usually by three to five transverse and longitudinal septa (Fig. 3) [1, 2, 3, 4].

The septation pattern is often species-dependant, P. chartarum and P. sacchari, for example, have conidia with three to five septa, while the conidia of P. africanus are not divided by septa [6]. Sometimes, dumbell-shaped chlamydoconidia are produced by the swelling and darkening of hyphae [5].

Most Pithomyces species are saprophytic fungi, which means they colonize dead or decaying organic matter [1, 2, 3, 4]. Clinically, the most relevant species is P. chartarum, due to its ability to infect mammals such as sheep, ruminants, and deer, causing facial eczema [1, 2]. This cutaneous disease of host animals has been reported in different countries, including Brazil, the USA, Nigeria, and New Zealand [1, 2].

Although Pithomyces species rarely cause human infections, they have been reported as causative agents of inflammation of the peritoneum (continuous membrane which lines the abdominal cavity and covers the abdominal organs) and nail infections (onychomycosis) [1, 2]. Being widely present in the air, Pithomyces spores have been associated with cases of asthma [1, 2]. Pithomyces chartarum was also isolated from cerebrospinal fluid in the case of the intravenous drug abuser affected by fungal meningitis. However, it has not been confirmed that P. chartarum was definitely the causative agent of the disease [7].

Pithomyces chartarum has been well-known for over a hundred years as an infectious agent of sheep and cattle. It causes pithomycotoxicosis, a disease of ruminants grazing pasture [8]. The disease is triggered by ingestion of mycotoxin sporidesmin A, produced in spores of certain strains of P. chartarum [8]. Sporidesmin A causes liver damage, making removal of the normal end product of chlorophyll metabolism, phylloerythrin, impossible. This photodynamic compound cannot be excreted by bile from the bloodstream, developing lesions of unpigmented skin when animals are exposed to sunlight [8].

This fungus grows on decayed plants during rainy days, at temperatures of about 24 °C (75.2 °F), and relative humidity higher than 80 % [8]. While outbreaks of face eczema have been most severe in New Zealand, the infection has been observed in many other countries with warm temperatures and intensive ruminant grazing on pasture. The vast majority of P. chartarum isolates from New Zealand produce sporidesmin A, whereas variable proportions of strains from other countries do not [8].

The first lesions appear a week after sporidesmin A has been ingested [8], affecting a number of animals at the same time [9]. Sheep shake their heads and oedema of ears, eyelids and lips develops. After a couple of days, the affected skin becomes necrotic and peels off, while jaudince is present for many weeks [9]. In milking cows, the first symptom is a drop in milk production. Their teats become swollen and painful with characteristic discharge, and inflammation can extend to their faces, affecting the muzzle and area around the eyes, as well as their urinary bladder. Other symptoms include necrosys, peeling of affected skin, and jaudince [9]. Two weeks after the initial damage, the liver starts to regenerate [9].

Exposure and health effects of Phitomyces on humans

Being widespread in the air, Phitomyces species are some of the most common fungi found outdoors, along with Cladosporium, Alternaria and Epicoccum [10]. In research of mycoflora in homes in the Midwest region of the US, Phitomyces was found to be more frequently present in higher concentrations in homes with children with asthma than in houses without asthmatic children [10]. Several other studies have also described the presence of Pithomyces conidia in indoor environments where asthmatic patients live [1]. The results of studies suggest a correlation between asthma and the presence of Pithomyces in environmental air samples. However, the accurate identification of the species level has not been attempted [1].

While Pithomyces chartarum has been reported to cause skin and sinus infections, P. sacchari has been isolated from human lungs, sinuses and cornea [11]. Both species are known to be causative agents of nail infection in humans (onychomycosis) [11]. According to one study, Pithomyces chartarum was the second most commonly found fungus, with the occurance of 20 % of fungal-positive samples of toenalis [12]. However, information on the adverse health effects of Phitomyces on humans is scarce, indicating that Pithomyces species seldom cause human infections.

Pithomyces species can be considered oportunistic poathogens, which means they can cause clinical disease only if circumstances are favorable (immunocompromised individuals). Since such infections are rare, there is a little data about treatment of Pithomyces infections. According to the results of antifungal susceptibility tests [1], Pithomyces isolates obtained from clinical samples have shown high sensitivity to drugs such as amphotericin B, caspofungin, itraconazole, voriconazole, micafungin, posaconazole, and terbinafine.

In the case of pithomycotoxicosis, antihistamines and antibiotics are used to treat secondary bacterial infections in infected animals [8, 9]. Preventive measures are of great importance and include selection breeding of animals, since not all breeds are equally susceptible to sporidesmin, as well as supplementing animals with therapeutic doses of zinc [9]. Monitoring regional and farm spore counts is very important for estimating when to start or stop a management program [9]. Spore identification and counting should be performed as precisely as possible, so equipped specialists should be engaged to estimate the necessary parameters.