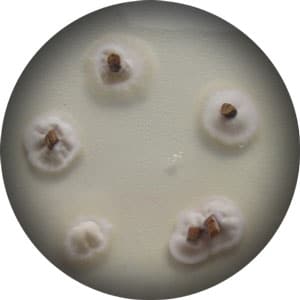 One of the most unwanted and economically most significant phytopathogenic fungi is Claviceps purpurea, commonly known as rye ergot fungus. The name is derived from the French word for spur, referring to sclerotia, the dark fungal structure produced within the ripe grass floret in the final disease stages [1, 2, 3].

C. purpurea belongs to the genus Claviceps which contains about 40 known species [1]. Being distributed mainly across the northern temperate world regions, C. purpurea affects about 400 grass species, including cereals such as triticale, wheat, and barley. Economically most significant is rye infection, which is the major crop in European countries [1]. C. purpurea doesn’t affect yield significantly; however, toxic alkaloids produced by its sclerotia cause severe health issues in humans and animals [1, 2, 3].

Within the sclerotia of C. purpurea, sexual fruiting bodies called perithecia are produced. Perithecia are flask-shaped and are filled with multiple club-shaped asci. Each ascus contains eight needle-shaped septated ascospores up to 2 µm in diameter and 60-70 µm long. Being ejected from asci into the air to a height of 7-15cm, ascospores are disseminated by wind or insects. From one sclerotium of C. purpurea, up to one million sexual spores can be produced. Still, only spores that land on featherlike stigma or ovary of the grass flower can germinate and cause the infection [1].

The anamorphic (asexual) stage of C. purpurea is known as Sphacelia segetum, and it can be grown on potato dextrose agar or similar media at 20-25°C. Most Claviceps species form colonies about 40-50 mm in diameter, with narrow and diffuse margin, plane, velvety and whitish. Sporulation is abundant after three weeks of incubation [4].

The life cycle of C. purpurea

Mimicking pollination, the infection process stimulates the ovary to produce “honeydew,” an exudate rich in sugars and amino acids, which accumulates in the floral cavity. Overflowing exudate supports further fungal growth, helping conidia spread to other florets and plants by insects and rain.

Cereals are infected mainly by asexual conidia spread from previously infected wild grasses growing nearly to them (secondary inoculum) and become resistant to C. purpurea a few days after fertilization. Cool and wet weather are conditions that delay pollination and increase the period of susceptibility [1].

After sporulation and honeydew secretion that lasts about a few weeks, the infected ovary develops into a hard dark mass of hyphae – sclerotium. Within four to five weeks, sclerotia mature, replacing the seed of the host plant. Sclerotia can prolong survival due to mycelial tissue rich in storage cells and the darkly pigmented cortex that protects mycelium from environmental conditions such as UV light and desiccation.

Sclerotia are partly harvested with the grain, while another fraction of sclerotia falls to the ground, ready to survive the winter and germinate.

Germination of sclerotia lying above or beneath the soil surface begins in the spring, just before the flowering of grasses. The germination process is followed by forming one to several mushroom-like structures, stromata consisting of spherical capitula on stalks. In each capitula is formed dikaryotic ascogeneous hyphae that produce sexual fruiting bodies, called perithecia. Within each perithecia are asci with ascospores. Moist conditions stimulate ejection of ascospores into the air providing primary inoculum for the future host species.

Sclerotia of C. purpurea produces three major ergot alkaloids: D-lysergic acid and its derivatives, Clavine alkaloids, and ergopeptines. Prolonged consumption of these highly toxic compounds leads to “ergotism,” which clinical signs include hallucinations, severe gastrointestinal upset, dry gangrene, and a painful burning sensation in the extremities. The first well-documented epidemic of ergotism was in the 10th century [2]. Nowadays, the disease is mainly in veterinary interest, causing severe effects, including abortion in cattle fed on infected grains [5].

The first noticeable sign of ergot infection in plants is the appearance of honeydew, a yellow, syrup-like liquid between the glumes of the floret (Fig. 3). If inspected microscopically, in honeydew can be found one-celled, ellipsoidal conidia, 2-3×4-6 µm in size.

The honeydew phase is later replaced by purplish-black sclerotia, commonly known as ergot (Fig. 4). Sclerotia are usually  2–20 mm long, filled with whitish mycelia. The size of the sclerotium depends on the host plant and is usually up to 5 times larger than the host seed [5]. Multiple sclerotia 4-5cm long can be found on the same head [3].

Once ergot is observed in the field, not much can be done to control the disease. Therefore, prevention is the best management strategy. It includes planting certified, ergot-free seeds with a good germination percentage. Following recommended agronomic practice referring to seed density and fertilization is also crucial for avoiding prolonged flowering and spreading the disease within the field or from one field to another. Wild grasses, weed, and cereal volunteers should be eradicated before heading since such plants can be the source of ergot inoculum.

As sclerotia usually don’t survive for more than a year, crop rotation with non-susceptible crops can be beneficial. Deep plowing can also be applied since ascospores from stromata cannot be dispersed into the air when sclerotia are buried deeply in the soil.

When harvesting, special attention should be paid to the edges of the field because spores are transported from roadside grasses by wind and insects. Areas with heavily infected plants should be harvested separately.

Chemicals such as sterol-inhibiting fungicides have been applied to seed or soil to inhibit the production of ascospores from sclerotia but are very expensive [5].