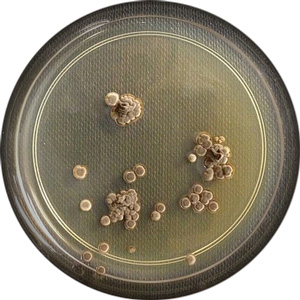 Fungi can be observed all around us. They can be found in the soil and air, on dead or living plant material and even on humans and other animals. Most fungi require relatively normal conditions in order to thrive. They generally enjoy temperate climates and the presence of water. In fact, in many cases they are the same conditions required by humans, so they often try to cohabit with us.

On the other hand, there are many species of fungi that can survive extremely harsh conditions. For example, Paecilomyces variotii able to grow at temperatures of 50-60°C and can even withstand temperatures of 80-100°C for up to 15 minutes [1]. Species of Aureobasidium isolated from rocks in Antarctica can grow and reproduce at 0-5°C and are able to tolerate temperatures as low as −80°C [2]. Cryptococcus neoformans has been known to be highly radiation resistant and has been found in fatal radioactive environments such as the damaged nuclear reactor at Chernobyl [3]!

This article will review another genus of extremophiles, namely the Wallemia genus. These fungi are characterised by their low requirement for water and their ability to colonize environments with high amounts of salt.

Wallemia is a small genus that consists of several species of xerophilic fungi. They are well known for their association with extremely salty environments. They are present in the soil and air and are able to colonize and survive in environments with little available water. Wallemia species are common agents of food spoilage and are often found in dry, salted, or highly sugared foods. Wallemia has cosmopolitan distribution and is commonly found indoors. Although confirmed as pathogens and important allergens, they are rarely involved in human disease.

The Wallemia genus was named after a 19th century Norwegian fish inspector, Mr. Wallem. Fish caught off the coast of Norway were preserved with plenty of salt and left to dry on the rocks. Despite this method of preservation, spoilage of the fish routinely occurred. Mr. Wallem took samples of the contaminated fish to mycologist Johan Olav Olsen, who described the fungal contaminant as Wallemia ichtyophaga (ichtyophaga meaning “fish eater” in Latin) [4].

Long after this discovery two more species were added to the genus, W. sebi and W. muriae. In 2015, a phylogenetic study resulted in 3 new species breaking away from W. sebi: W. mellicola, W. canadensis and W. tropicalis [5]. The remaining two species are W. hederae and W. peruviensis – the latter was discovered in 2017 [6]. W. sebi is the most studied species of Wallemia.

Where can you find Wallemia?

Wallemia have cosmopolitan distribution. They inhabit the soil and air and are known to colonize extremely salty environments. In fact, W. ichtyophaga grows in environments with 30% NaCl [7] – a concentration that would kill most organisms (the salinity of the Dead Sea is 32%). W. sebi is commonly isolated from the hypersaline waters of salterns and salt lakes [4].

Their ability to grow at extremely low water activity values (as low as 0.69) [8] means that they can colonize various types of food, including those preserved by age old methods. Humans have used curing and sugaring as methods of food preservation for millennia, but Wallemia species do not seem to be concerned. They are commonly found developing on seeds and cereal grains such as wheat, maize, barley, rice, peanuts, peas and many others. They have been isolated from bread and other baked goods, spices, chocolate, milk, cake, fruits and fruit products such as jams and jellies, maple syrup, salted fish and dried meat products [9].

W. sebi and W. muriae commonly occur in indoor environments. Due to their low water activity requirements, they are considered to be primary colonizers. They usually make up a part of household dust and can be found on floors, carpets, mattresses and upholstered furniture. They can also be isolated from air handling unit filters, painted surfaces and fabrics/textiles. They are considered to be a dust fungi and do not usually develop into mold in indoor environments [8].

Although Wallemia was discovered and remains relevant due to being an agent of food spoilage, they may also represent a risk to human health. Despite their ubiquity, little is known about the effects of consumption of Wallemia contaminated food. However, Wallemia species are confirmed allergens and are known to cause rare infections in humans.

Human infections by Wallemia are very rare. Only 3 reports have ever been associated with this fungus, all of them cutaneous or subcutaneous infections [4]. The first two reports were from the first half of the 20th century, and the last report concerned a case of subcutaneous phaeohyphomycosis in a 43-year-old woman from India [10]. Wallemia is of the rare fungi that can cause infections even in healthy and immunocompetent individuals. Fungi that can affect healthy people are usually highly pathogenic; therefore it is rather unusual that Wallemia infections are so rare.

On the other hand, allergic reactions to Wallemia are fairly common. Like all fungi, they produce thousands or even millions of spores in order to reproduce. The spores of Wallemia species are very small in comparison to other fungi and are ideal for aerial dispersal. These lightweight spores are ubiquitous in the air around us and are inhaled by humans every day. For most people this is not an issue as the foreign bodies are easily dealt with. However, people that are sensitive and are prone to respiratory allergies may suffer an allergic reaction.

Even people who are not overly sensitive can suffer from respiratory issues if the spores are inhaled chronically. In fact, Wallemia has been associated with farmer’s lung disease, a form of bronchial asthma or hypersensitivity pneumonitis that often combines with pulmonary fibrosis and emphysema. This is an occupational hazard that occurs mostly in farms, stables and barns where fungi colonize improperly stored hay or grain, leading to elevated levels of spores in the air. The symptoms of farmer’s lung disease include dyspnoea, cough, tiredness, headaches and occasional fever [4].

How to get rid of Wallemia?

Wallemia is not a typical mold that grows on damp materials. It is considered to be a dust fungus, meaning that it is present in particle form in household dust, carpeting, air filters and so on. The best way to prevent increased levels of Wallemia in your home is to dust your surfaces often and to vacuum regularly.

Although Wallemia is usually present as particles in the air, it can occasionally develop into a mold on wooden surfaces, furniture or mattresses. When dealing with most mold species, removing the source of moisture is the main step when removing the mold. However, Wallemia can continue to thrive in a relatively dry environment so the removal process isn’t so straightforward. In many cases, the only solution is for the infected surfaces or items to be replaced.

In any case, it is a good idea to seek out the help of professionals. An experienced mold removal professional can inspect your house thoroughly for mold, provide advice on further action that needs to be taken and give you an estimate of the cost of the job.

Mold Busters have been in the mold removal business for over 15 years. Our experienced team of technicians is armed with top-of-the-line mold removal technology in addition to their expertise on the subject of removing mold. We offer a wide range of services focused on removing mold and improving air quality. Call us today to book an appointment.