What are Verticillium fungi?

The genus Verticillium encompasses a cosmopolitan group of filamentous fungi, including several pathogenic species. Ecologically, Verticillium species can be mycopathogens (infecting other fungi), entomopathogens (infecting insects), and phytopathogenic (infecting plants – The most prominent species of this genus are notorious plant pathogen that causes vascular wilts of crop plants. What makes members of this genus so dangerous plant pathogen is the ability of this pathogen to survive several years in the soil. They reproduce via conidia and are asexual states of the fungal family Plectosphaerellaceae and are considered as members of the Deuteromycetes (Fungi Imperfecti) due to the lack of sexual propagules. Human or animal infections have not yet been reported for Verticillium fungi (1–3). 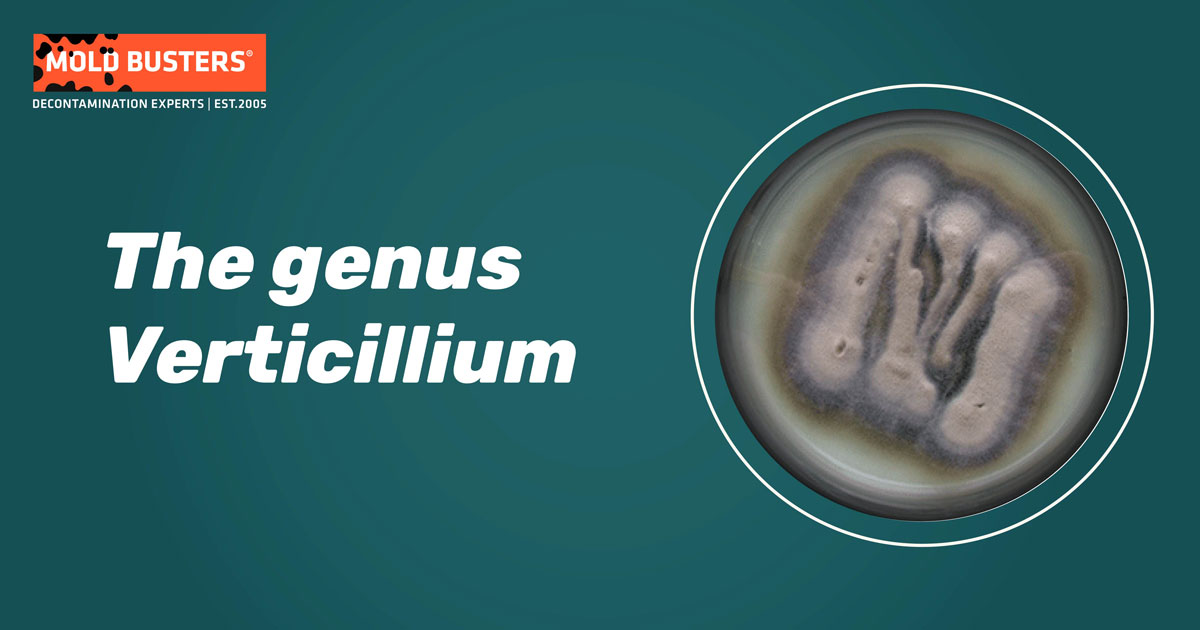 Verticillium fungi are asexual and produce only vegetative mycelium. Vegetative hyphae are hyaline (translucent), septate (divided), and multinucleate (more than one nucleus per cell). Colonies have a suede-like surface, are white to pale yellow, and turn pinkish-brown, red, or green with age. Additionally, they are fast-growing colonies (3) (Fig. 1).

Conidiophores (spore-bearing structures) are well-differentiated and upright, verticillately branched over most of their length, which bear whorls of phialides. Phialides are specialized hyphal structures, and each of them carries a mass of conidia. Conidia are ellipsoid, hyaline, or brightly colored and usually single-celled. The name of the genus Verticillium comes from the verticillate (whorled) arrangement of the phialides on the conidiophore (2) (Fig. 2).

Entomopathogenic and mycopathogenic members have been considered to be Verticillium species; however, recent changes now list most of these members into a new genus called Lecanicillium. After the revision of the original Verticillium genus, six phytopathogenic Verticillium species are now generally recognized. These species can infect a large variety of plant species. For example, V. dahliae has been recorded from several hundred hosts. However, not all of these reports can be considered credible due to taxonomic confusion between three morphologically similar species (V. dahliae with V. albo-atrum and V. longisporum) (1,4).

Out of all six species capable of infecting plants, V. dahliae and V. albo-atrum are truly pathogenic. They cover a vast host range of over 200 dicotyledons, including trees, shrubs, and herbaceous plants. Interestingly, most monocots (containing one seed leaf), conifers, and ferns are considered non-hosts for this disease. Several agricultural crop plants are especially infected by Verticillium wilt, including pumpkins and watermelons; mints; solanaceous plants like eggplants, peppers, potatoes, tomatoes; spinach; and strawberries. Cotton crops are especially plagued by this disease (2,3,5).

Verticillium fungi are vascular wilt pathogens that invade plants’ xylem vessels. Xylem is the canals whose primary purpose is to transport the water from the root system to stems and leaves. Xylem also transports nutrients. Economic losses of 50% or higher normally occur on high-value crop plants such as cotton, lettuce, olives, and potatoes, and on strawberries, the yield loss can go up to 75% if the soil is not fumigated (4).

This disease can be so persistent, as certain Verticillium species can form microsclerotia. These structures are aggregations of specialized thick-walled, pigmented hypha, which can persist and survive dormant in the soil for 10 years or more. Microsclerotia are stimulated to grow by certain compounds excreted by the plant’s root system. Verticillium wilt is a monocyclic disease, and this means that a microsclerotium will cause only one infection within one growing season. New microsclerotia may be formed in the season of the original infection, but it will not lead to a new infection in the current season (2,3,6).

Verticillium wilt generally prefers moist soils and a temperature range between 21-27°C (70-80.6°F). Microsclerotia are stimulated to germinate by fluids secreted from the roots (exudates). Exudates can be from both host and non-host plants, as long as they are near the propagules’ vicinity.

The fungus penetrates the roots and enters the cortex region (the heart of the root), usually through small wounds which are constantly forming as the root system grows through the soil. From here, the hyphae will invade the xylem vessels of the plant, where it will for conidia. The conidia are pulled up the plant together with water, and thus the vascular colonization occurs. When the conidia germinate, the mycelium and the host-plant reaction products plug the hosts’ vascular system and prevent water from reaching the upper stems and leaves of the plant. The foliage and stems become water-deprived and soon begin to exhibit symptoms of wilting and foliar yellowing of the leaves (chlorosis) (Fig. 3). As the infected plant starts to die, the fungus will produce microsclerotia released into the soil together with the decomposition of infected plant material. The fungus can then survive for years in the dormant state until it infects a new host (2,3,6).

Due to its hardiness, Verticillium wilt pathogens can be easily spread throughout large distances by transport of infected material. It is readily spread through non-symptomatic but infected planting stock such as mint seedlings, ornamental plants, or potato tubers. Once Verticillium sp. is established in afield, it is spread across by soil disturbance from land cultivation, wind, or water. Their spores usually reside at the soil depth of 30-40 cm, and inoculum count increases by year when susceptible crops are planted. Therefore, the best courses of Verticillium wilt management are site selection, crop rotation, chemical fumigation, resistant cultivars, and clean planting stock (2,3,7).

Site selection is important for infection prevention, and cropping history and Verticillium wilt history of the selected site should be considered. In fields where plants susceptible to the disease have been grown previously, the soil can be infested with Verticillium spp. propagules. Verticillium spp. can be isolated even from the roots of non-susceptible plants, indicating that these non-hosts can serve as an inoculum reservoir (2,8,9).

The application of chemical fumigants is an effective measure of disease control, but a radical and costly one. This is done in fall or the spring, using irrigation systems or shank injectors. The area is also best to be cover so that the fumigant volatilization can be prevented. The effectiveness of this process is predicted to be from 85-95% (2,8,9).

Probably the best course of action in the control of Verticillium wilt is to carefully choose resistant and infection-free plants to cultivate because the easiest and the most cost-effective way is always to avoid infection in the first place (2,3,7).

The #1 toxic mold type found in kitchens in Canada is the Penicillium/Aspergillus mold group?! Find out more exciting mold stats and facts inside our mold statistics page.