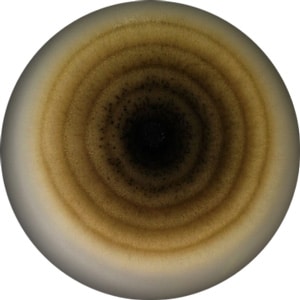 Blackhead molds, also known as sooty molds, are caused by saprophytic fungal species that invade dead or dying plant tissue. The most common such species are from the genus Alternaria, Cladosporium, Stemphylium, and Epicoccum. [3] Among them, the genus Stemphylium comprises both saprophytic and plant pathogenic species, which are distributed all over the world.

Stemphylium is a well-known monophyletic genus of ubiquitous, dematiaceous filamentous ascomycetes, classified in the Pleosporaceae family of fungi. It was originally discovered in 1833. [2]

Identification of Stemphylium species is based on morphological properties such as variation in conidium, conidiophore, and ascospore morphology. The number of species included in the genus varies from 20 up to 150. [9]

The Stemphylium genus is very similar to other related genera from the same family, namely Alternaria. Similarities are reflected in the shape of conidia. The conidia of both genera are pigmented, formed from hyphae in the mycelium, and multiseptate. The main difference is that Stemphylium conidia originate from a conidiogenous cell at the tip of a hypha and are always solitary; with Alternaria, conidia stay connected, forming a chain. [9] Also, conidiospores of Stemphylium can be simple or branched with a dark swollen terminus bearing rough or smooth-walled, light brown or black conidia. [13]

This species has been found as a pathogen on lentils, spinach, onion, asparagus, tomato, alfalfa, and clover. The diverse range of hosts that this species is able to affect reflects its ability to survive harsh environmental conditions. [13]

“Stemphylium blight”, a disease caused by S. botryosum, is one of the most widespread diseases affecting lentil cultivations in many parts of the world. This disease’s first appearance occurred in Bangladesh in 1986, where it destroyed more than 80% of the yield. Stemphylium blight appears in the field during the flowering stage in a humid, cooler climate when leaves are wet for an extended period of time. [2] The main source of primary inoculum is infected plant debris; the conidia and ascospores produced on the plant debris are responsible for the spread of this disease. Initial symptoms, which appear on the leaves of the plant, consisting of small, light beige lesions that later enlarge and coalesce, destroying entire leaves. Pedicels and flowers can also be infected; under severe infestations, whole plants can be blighted. This can cause significant loss in biomass and seed yield. [11,13,14]

Some strains of S. botryosum can produce secondary metabolites, some of which are phytotoxins for host plants. [2]

The use of fungicides can effectively reduce economic losses caused by S. botryosum. Fungicides like mancozeb, iprodione, and chlorothalonil are recommended for the control of Stemphylium blight in lentils. Also, adequate sanitation, such as the incorporation of crop residue, can reduce the damage that this disease can cause to crops. [13]

The conidia of S. herbarum are oval in shape and light to dark brown in color. They are multicellular with transverse and longitudinal septa. Conidiophores are branched and cylindrical; asci have around eight ascospores, yellow, curved, or straight. [12]

Purple spot, a serious disease affecting asparagus spears and fern, is also caused by S. vesicarum. Symptoms appear on edible seeds and can affect their quality. You can also find lesions that affect the stems and branches of the asparagus plant, resulting in early defoliation. The primary source of inoculum for spears are ascospores, and the primary source of ascospore inoculum is pseudothecia on the surface of dried stalks from the previous year. The ascospore inoculum depends on rain and wet weather conditions. [6,7]

Many methods of controlling Stemphylium leaf blight have been made including the application of biological microorganisms induction of plant resistance. Also, pretreating susceptible plants with avirulent pathogens has been shown to enhance resistance to infection. [8]

Allergies affect one-third of the general population, and people can be allergic to one or more types of mold. Allergenic molds can cause rhinitis, asthma, respiratory distress, and dermatitis.

The Alternaria alternata species is considered one of the most important agents of fungal allergens in the world. As mentioned earlier, the Stemphylium genus is similar to Alternaria, hence Stemphylium species are also capable of causing similar allergies. It is documented that Stemphylium induces rhinitis and asthma in children, and also angioedema, conjunctivitis, allergic sinusitis, and bronchopulmonary mycosis in sensitive individuals. Some Stemphylium derivatives have antibacterial and anticancer effects. [5,15]

There is no cure for allergies, but to reduce allergy symptoms, it is recommended to avoid contact with mold spores. In cases where you can not remove or reduce mold exposure, allergy medications may be needed. For asthma caused by  Stemphyllium, consulting with a doctor is necessary.

Where can Stemphylium be found?

Stemphylium species can survive on infected plant remains seeds, wood,  soil, and leaves. They can grow well on available cellulose substrates, although these substrates can affect spores’ normal development. As with most fungi, the growth of Stemphylium requires high levels of humidity and cooler temperatures. [2,15]

Stemphylium is rarely found indoors, but it may be seen in dust or on cellulosic material such as paper, wood, food, and cardboard. This can be attributed to outdoor particles making their way indoors. Usually, indoor Stemphylium growth occurs near windows and doorways, especially if moisture levels are elevated. [15]

How to get rid of Stemphylium?

If you find Stemphylium mold in your house, you should remove it immediately due to its allergy-inducing health effects. Although it is impossible to identify the type of mold simply by looking at it, you can get a mold test to confirm which species you are dealing with.

As with any type of mold, you need to ensure to locate and repair the source of the contamination. Once you’ve done that, you can clean the area and dispose of any damaged materials. To prevent future mold regrowth, try to clean your house regularly, remove dust, and get rid of any old papers or cardboard that tend to increase the risk of mold growth. Of course, if you are dealing with bigger mold contamination,  calling a professional mold removal company is always the best option.