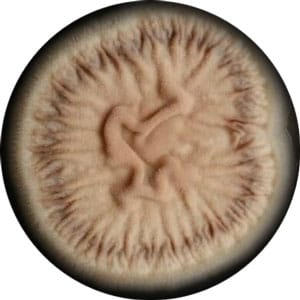 Sporothrix schenckii complex is a dimorphic fungus from the phylum Ascomycota, well-known for causing the disease sporotrichosis that infects humans and animals [1, 2]. It is named after Benjamin Schenk, a medical student who first isolated it from a patient [1, 3].

The species-complex S. schenckii consists of more than six closely related species that can be found in decomposing matter and soils all over the world [2]. Differences between species are related to their microscopic structures, genetic and metabolic characteristics, growth temperature, and geographical occurrence [2].

Five groups of isolates have been characterized [2]:

Being a thermally dimorphic fungus, S. schenckii can grow in mold (filamentous, hyphal) or yeast form [1, 2].

The filamentous form of S. schenckii appears when cultured at 25°C and when found in the environment, growing on plants and decaying vegetation (saprophytic stage) [1]. Macroscopically, filamentous colonies cultured on potato dextrose or malt extract are smooth and wrinkled colonies that never become cottony (Fig. 1 left). They are initially white, but after a few days, the color turns brown to black [1]. Mycelia is composed of septate hyphae 1 to 2μm in diameter. Conidia (asexual spores) are single-celled, oval-shaped, glass-like (hyaline), or brown. They emerge singularly or in petal-like clusters (Fig. 1 right) at the tips of conidiophores [3, 4]. Pathogenic strains form spherical or triangular pigmented conidia with dark, thick cell walls that distinguish them from nonpathogenic strains [1, 4].

Cultivated at 37°C or when found in host tissue, S. schenckii is found in the form of budding yeast [1]. Macroscopically, it forms smooth colonies, tan or cream-colored. Yeast cells are 2 to 6μm long (Fig. 2), usually with elongated, cigar-shaped buds on a narrow base [1]. The best growing medium for obtaining a good yeast phase is the brain-heart infusion (BHI) agar [3].

In vitro, the transition from filamentous to yeast form in S. schenckii can be attained by culturing mycelia or conidia at 35 to 37°C on rich culture media [1]. This transition process also occurs after humans and animals are infected with filamentous S. schenckii [1]. Morphologically, the bud-like structures emerge from the sides and tips of hyphae [1]. After septation of the hyphae, oidial cells are formed without obvious changes in the cytoplasmic content of the parent mycelial cell. Budding of yeast never occurs directly from conidiospores [1]. The conversion of the mold form to the yeast-like form is essential for the confirmation of identification of thermally dimorphic fungi in culture [3].

S. schenckii doesn’t reproduce sexually. Some studies identified the plant pathogen Ophiostoma stenoceras as the sexual form (teleomorph) of S. schenckii [1, 5]. However, due to differences in morphology, physiology, and virulence characteristics, it was finally concluded that O. stenoceras and S. schenckii are different species [1, 5].

In the environment, S. schenckii can be most commonly found as a saprophyte of plants such as sphagnum moss, roses, and hay [1, 5]. Some animal species, such as cats, dogs, horses, camels, donkeys, rats, birds, and insects, can also act as vectors for disease transmission [1, 2, 5].

Infection occurs after people, or animals get in touch with soil or plant material contaminated by S. schenckii. Fungus usually enters the skin that has previously been injured by cutting or scraping. [1, 2, 5]. After the infection, being exposed to higher temperatures in the host’s organism, the mycelial phase transforms into yeast form [5]. The lesions usually affect the skin and subcutaneous cellular tissue, while yeast cells can also be disseminated by circulation to other organs [1, 5].

The yeast form of S. schenckii can also be transmitted directly from an infected animal to an animal or a human after close skin contact or skin injuries such as scratches or bites [5].

While some activities, such as agriculture, mining, and wood exploitation, are traditionally associated with sporotrichosis, transmission by animal vectors has been reported in isolated cases or small outbreaks [1]. The inhalation of conidia is also a mode of transmission that leads to pulmonary sporotrichosis, but it is rather uncommon [1, 5].

The amount of inoculum and pathogenicity of the fungus and the host immunological state influence the clinical presentation [5]. There are three types of disease manifestation [5, 6]:

Most clinical cases of cutaneous (skin) sporotrichosis begin with the formation of a small, painless bump (papule) at the site of injury, which is usually on the hands and arms [5, 6]. The papule develops within 1 to 12 weeks after exposure to the contaminated material [6]. The papule might become bigger and resemble an open sore or ulcer that takes a long time to cure [5, 6]. The papule can develop into a subcutaneous ulcerated nodule (Fig. 3) that produces pus [5, 6].

Symptoms of disseminated sporotrichosis depend on the body part affected. Disseminated skin sporotrichosis manifests as multiple skin lesions without systemic dissemination [2]. Disseminated infection of the joints can cause joint pain and swelling that can be mistaken for rheumatoid arthritis [2, 5, 6]. Infections of the central nervous system manifest as meningitis, causing headaches and seizures [2, 6], while affecting the peripheral nerves can lead to neuropathy [2]. Systemic spreading is considered opportunistic, occurs in immunocompromised individuals, and can sometimes be fatal [2].

Symptoms of the rarest form, lung sporotrichosis, include cough, shortness of breath, chest discomfort, and fever [2].

The most common treatment for this type of sporotrichosis for the skin and subcutaneous forms of sporotrichosis in humans is itraconazole [2, 6]. Supersaturated potassium iodide (KI) is also commonly applied for treating skin sporotrichosis in humans and animals [2, 6]. Severe forms of the disease, such as lung, bone, or nervous system infections, are commonly treated with intravenous amphotericin B medicine [2, 6]. Rarely, when infected lung tissue must be removed, diseased people need surgical intervention [6].