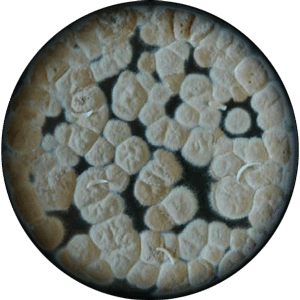 What is Scopulariopsis brevicaulis?

Scopulariopsis brevicaulis is type species of the saprophytic genus Scopulariopsis, which belongs to the family Microascaceae. It was firstly described in 1882 as Penicillium brevicaule by Saccardo and renamed Scopulariopsis brevicaulis by Bainier in 1907 [1]. It is a widespread fungus, mostly known as soil saprophytes, but it can act as an opportunistic pathogen on animals and humans [2,3]. It has proteolytic and cellulolytic abilities [4], and isolate obtained from marine sponge produces secondary metabolites scopularides A, B, and cyclodepsipeptides [5]. It has not been reported to produce mycotoxins [6], but growing on an arsenic medium can produce a poisonous compound [7]. Indoors, it can be found in dust and various damp parts of the household [2,3]. S. brevicaulis and is one of five Scopulariopsis species connected with onychomycosis, a fungal infection of the nails [8].

Where can Scopulariopsis brevicaulis be found?

In Ontario, Canada, S.brevicaulis was mainly isolated from mattresses and settled dust, while on walls was present in smaller amounts (3%) [10]. S. brevicaulis was the dominant species in poultry units, both indoor (40.5%) and outdoor – around poultry (62.6%) [11]. In swine, it was the second most isolated specie from indoor air and the third isolated species from swine surfaces [12]. It can act as an opportunistic pathogen on humans and animals, and its frequently isolated primarily from human skin and nails, then from animals [2,3]. Interestingly, S. brevicaulis is a parasite of ticks Dermacentor variabilis [13].

S. brevicaulis is the most prevalent and significant opportunistic human pathogen from the genus Scopulariopsis[8]. It is known as a causal agent of onychomycosis and various skin problems [2]. It is found in deep cutaneous tissue of the ankle, great toe, forearm, skin, palm, fingers lip, and lymph node [8,14]. When a patient doesn’t have serious health problems, it rarely causes respiratory tract (pulmonary, bronchial) infection, sinusitis, or disseminated infections. Otherwise, S. brevicaulis can induce severe bronchial invasion. This disseminated infection affects different organs like the heart, lungs, kidneys, thorax, skin, and blood in patients with different types of leukemia [8,15]. In water-damaged homes of asthmatics’ patients in Cleveland were detected significantly higher concentrations of S. brevicaulis and Trichoderma viride than in homes without asthmatics’ [16]. Also, another dangerous characteristic of S. brevicaulis is its capability to produce toxic volatile compound trimethylarsine from the arsenic medium. This was discovered after numerous people poisoning in their homes. Wallpapers or tapestry on the walls consisted of non-volatile arsenic pigments, which fungus converted into a volatile poisonous compound with garlic odor [7].

Apart from humans, S. brevicaulis are pathogenic in animals. It causes Hyperkeratosis in black calves [17], skin infections in goats and rats, and hair loss and skin lesions [18,19]. Also, it is reported tha S. brevicaulis causes rhinosinusitis in dogs [20].

Scientists discovered that S. brevicaulis isolated from a marine sponge produced a compound called scopularide A, significant for its specific activity against pancreatic and colon tumor cell lines [3]. Also, S. brevicaulis holds the potential to be used as a bioremediation agent. It can degrade polycyclic aromatic hydrocarbons (PAHs), the environmental pollutant that in a larger amount originates from wildfires, and combustion of other biofuels such as dung or crop residues. S. brevicaulis can degrade different forms of PAHs by 60-82% after 30 days of incubation in a liquid medium [21].

Recent studies demonstrated that S. brevicaulis is resistant to antimycotics such as amphotericin B, flucytosine, and azole compounds, so infections might not be suppressed by standard antifungal treatment [22]. Itraconazole and terbinafine were effective just in some cases regarding the S. brevicaulis caused toe onychomycosis, while griseofulvin did not show promising efficacy. Ketoconazole was partially effective but unsafe to use since it manifested some adverse effects [23]. Studies recently showed that a triple combination of caspofungin, posaconazole, and terbinafine could be promising for treating deep tissue infections caused by Scopulariopsis species [24] and treatment with 40% urea and bifonazole [25]. The use of essential oils could be an alternative solution to S. brevicaulis nail infections. In vitro studies have shown that essential oils such as cinnamon bark, geranium, clove, manuka, and thyme can inhibit the growth of S. brevicaulis and some other keratinous fungal species [26]. Also, compounds extracted from different herbs showed their antifungal potential against S. brevicaulis. Some of these compounds are thymoquinone, thymol, and thymohydroquinone from black cumin (Nigella sativa) [27], and ethyl cinnamate from the clove basil plant (Ocimum gratissimum) [28].