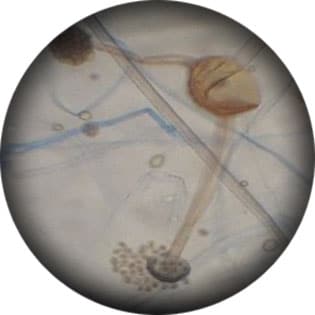 Back in 1895, Dutch scientists F. Went and H. Geerlings were studying the processing of the side-products of the tube sugar factories in Java, Indonesia. They isolated and described several microorganisms found in ragi, Indonesian traditional fermentation starter, and among them identified new mold species, Rhizopus oryzae [1].

Rhizopus oryzae, also known as Rhizopus arrhizus, can be viewed as a double-faced mold. It is well known as a causative agent of deadly opportunistic infection in humans. Still, on the other hand, it has huge biotechnological potential since it can produce many interesting and useful compounds.

This simple filamentous fungus belongs to the taxonomically primitive fungal group Mucoromycota [2], together with some well-known mold species such as Mucor mucedo. Interestingly, the ancestors of this type of mold were probably the first land-inhabiting fungi around 500 million years ago [3].

The main characteristic of genus Rhizopus, in general, is the formation of rhizoid [3], which is a root-like structure that has a function in support or absorption of nutrients. This mold grows fast and can colonize many different substrates, from various soils to seeds and decomposing fruits and vegetables. Geographically it is widely distributed mainly in tropical and subtropical regions; however, it can also be found elsewhere [4].

Due to its capabilities to produce a wide range of bioactive molecules, R. oryzae has great commercial value. This includes the production of several organic acids, alcohols, esters, and enzymes, giving it useful properties for the food and pharmaceutical industries, as well as bio-diesel production. Traditionally it has been used in soybean fermentation to obtain tempeh and ragi in Southeast Asia [4, 5].

However, R. oryzae is also known as an opportunistic human pathogen, causing dangerous mucormycosis infections in individuals with a weakened immune system. This life-threatening infection is characterized by rapid invasion of blood vessels with an overall mortality rate of over 50% [6].

Macroscopically, young R. oryzae colonies have a white cottony appearance and can be up to 1 cm thick. As they age, the colonies become brownish-grey to blackish-grey, depending on the amount of sporulation. Optimally this mold grows at 32-36 C. With a closer look using magnification, typical rhizoids can be observed. This root-like tissue is attached to the stolon, which is horizontally growing hyphae that connect groups of rhizoids and sporangiophores. The latter is a filamentous stalk on which spore-producing globular sporangium forms and can be long up to 1.5 mm [5, 7].

R. oryzae is classically identified by sporangiophore morphology and growth temperature. However, identification through molecular DNA markers, such as ITS (Internal transcribed spacer) region, became standard for the fungal species determination and nowadays is widely used as a universal fungal identifier.

What is hiding within Rhizopus oryzae genome?

Pathogenic strain R. oryzae 99–880 was isolated from a fatal case of mucormycosis, and its DNA sequence was the 1st published genome of Rhizopus species [8]. This study revealed several interesting features that could be correlated with the high adaptability of this organism. The highly repetitive 45.3 Mb (Mb=106 nucleotide base pairs) genome contains various transposable elements (TEs), comprising approximately 20% of the genome. Additionally, at some point in evolutionary history, the ancestor of this species went through the event of whole-genome duplication. Such events, together with the presence of many mobile elements within the genome, are expected to have a major impact on the evolution of the species. This allowed R. oryzae to use different food sources quickly and adapt easily to different habitats and environmental changes. Genomes duplication caused expansion of different gene families; among them are the genes related to cell growth and secreted enzymes which are known as fungal virulence factors [8]. More recently, a genomic and transcriptomic (analysis of total gene expression) survey of several Rhizopus and Mucor strains confirmed the presence of CotH invasins in all invasive Mucorales, with a strong correlation between CotH gene copy number and clinical prevalence [9].

Which are other Rhizopus species?

Besides R.oryzae, the genus Rhizopus contains other important species, such as R. azygosporus, R. microsporus, R. schipperae, and R. stolonifera. They are fast-growing saprophytic filamentous microorganisms, which inhabit soil and living or decaying organic material. Some of these species can also act as human or plant pathogens. They differ in morphological features, for example, the length of rhizoids and sporangiophores [3].

Similar to R.oryzae, R. microspores can cause opportunistic infections, although it is primarily a plant pathogen. However, a domesticated form of R. microsporus, R. oligosporus, is harmless and widely used for different human purposes [10, 11]. This variant probably originated from several centuries ago, and contrary to R.oryzae and R. microsporus, has never been documented as a causative agent of human infections. It is considered that R.oligosporus has lost genes responsible for the production of toxic metabolites during the process of domestication.

R. oligosporus is used in tempeh production in Indonesia and can produce various useful compounds. It has been used in industry for the treatment of wastewater and the production of several enzymes. Additionally, when consumed, it can act inhibitory on different Gram-positive bacteria, such as Staphylococcus aureus and Bacillus subtilis [10].

Rhizopus oryzae as a human pathogen

R. oryzae has the GRAS (Generally Recognized As Safe) status U.S. Food and Drug Administration (FDA) [4]. However, it has also been recognized as an opportunistic human pathogen and has a high prevalence under mucormycosis infections. Causative agents of mucormycosis are unique among filamentous fungi since they can infect a more heterogeneous population of human hosts compared with other opportunistic molds [6]. In comprehensive analysis with more than 900 reported cases of mucormycosis, Rhizopus species (47%) were the most common causes of culture-confirmed mucormycosis [6]. Among them, Rhizopus oryzae is the leading causing agent [12].

Usually, inhalation of spores from the environment precedes the development of mucormycosis. The most common underlying risk factors for the development of invasive disease include poorly controlled diabetes mellitus, metabolic acidosis, high-dose glucocorticoid therapy, penetrating trauma or burns, and persistent neutropenia. Patients who develop mucormycosis in the absence of underlying disease or immunosuppression often have a history of penetrating trauma, burns, surgery, or intravenous drug use before the infection [6]. Additionally, elevated serum iron levels have been recognized as unique susceptibility in patients with highly angioinvasive disease [12].

Additionally, inhalation of high concentrations of spores, which can occur with excavation, construction, or work in contaminated air ducts, can cause a slowly progressing pulmonary mucormycosis even in healthy persons [6].

Traditionally, diagnosis is based on histopathological examination or cultivation of fungi. However, there are efforts to standardize PCR (polymerase chain reaction) test as a reliable diagnostical tool for mucormycosis [6].

Can the disease caused by Rhizopus oryzae be treated?

Due to its property to invade vascular tissues, infarction of the infected tissue is common, and mortality rates are very high. Thus, treatment of Rhizopus infections remains difficult. Early diagnosis is crucial for a successful outcome. In the early stages of the disease, small focal lesions can be surgically removed. Amphotericin B in the liposomal formulation has been a drug of choice for the treatment of mucormycosis [6].