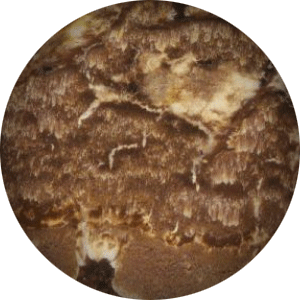 Meruliporia ‘Poria’ incrassata is type of basidiomycetous fungus that causes extreme decay of wood in houses and other buildings. It usually goes unnoticed as it destroys walls, framing, panelling, baseboards and other wooden parts of the house.

What is Poria Incrassata?
This species of fungus is formally known as Meruliporia incrassata. However, it is better known under the Poria name which will be used in this article. Poria is a fungus that causes extensive rot of wood. This fungus actually digests the cellulose component of wood as food. It turns the wood into a dark shade of brown and reduces its strength significantly. During the initial attack of Poria Incrassata, the wood is still strong enough to serve its purpose but over time it becomes weak and completely useless.

Poria is known as a “water conducting fungus”. This means that once it sets in, Poria will develop structures called rhizomorphs which serve to bring in water from external sources, just like the root system of a tree. In fact, the rhizomorphs of Poria actually look just like plant roots aside from the fact that they aren’t covered with bark [1].

Poria Incrassata differs in several important characteristics from most other building decay fungi. Its ability to attack wood of most species and to conduct water to the decay site accounts for its destructiveness [2].

Where can you find Poria Incrassata mold in your home?

Infections of Poria Incrassata in buildings typically start in basements or crawl spaces where wooden construction material is in close contact with the soil or with moist concrete or bricks. At first, papery mycelial fans, whitish with a yellow tinge, grow over the surface of moist wood, or more commonly between sub-and finish floors, between joists and sub floors, or in other secluded areas. If there is a sufficient supply of water, the mycelium spreads rapidly for distances up to 10 meters, destroying framing, sheathing, panelling, flooring, and other cellulosic materials [2].

Irregular vine like rhizomorphs branching into the soil or extending to some other constant supply of water may appear on foundations, framing, or the underside of flooring. Contents of buildings are also attacked. Damage has been reported to cupboards, wardrobes, documents, and to building papers. Infections can also spread to carpets, linoleum, oilcloth, canvas, and cellulosic electrical conduits and insulation [2].

Poria has mostly been reported in buildings located in coastal areas of North America, particularly in the Southeastern United States. It develops optimally at temperatures between 24-30°C, and does not tolerate temperatures above 35°C [2]. High humidity is one of the major factors of Poria development. Therefore, if you live in the vicinity of a body of water you should have your house checked for Poria Incrassata.

Ambient humidity aside, Poria Incrassata infections are caused by a number of factors, mostly related to poor construction methods. It can be caused when soil comes in contact with wood or when siding goes below the soil grade.

Poria Incrassata can also be caused when crawl spaces are inadequately ventilated or have poor earth to wood clearance. If a house has cracks in the perimeter foundation, permitting rhizomorphs to get to the wood, Poria Incrassata is likely to invade the home.

If the land around the house is not properly graded, or is sloped in a way that allows puddles or ponds to form near the house after rain, Poria Incrassata is also likely to develop.

Another mistake that home owners make is that they do not maintain clearance between landscaping and wooden structures of the house. As a result, their houses are exposed to soil contaminated with Poria [3].

Is Poria Incrassata dangerous to humans and animals?

No information is currently available regarding the health effects, toxicity or allergenicity of Poria Incrassata. However, as a water conducting fungus, Poria Incrassata dampens the wood structure of your home, making the environment habitable for other molds that are known to be dangerous, such as Aspergillus, Alternaria, Chaetomium, Cladosporium and many others.

Molds in general are dangerous to humans. They can cause relatively benign symptoms such as a sore throat, skin rashes, or irritation of the nose and eyes. However, immunocompromised or sensitive individuals can succumb to serious mold related diseases which can be fatal in extreme cases.

Dogs, cats and other small animals are just as susceptible to mold related illnesses as humans are. Pets living in an infected home could experience severe health issues like difficulty breathing, nasal discharge and bleeding from the nose and mouth. Ingestion of moldy food could lead to loss of appetite, frequent defecation, vomiting and other gastrointestinal issues. Animals could also suffer seizures, tremors, gastro intestinal disease, liver damage and pulmonary haemorrhage. Affected animals may die if not treated quickly and effectively.

How to identify Poria Incrassata?

The first indicator of the presence of Poria Incrassata in the home is the presence of rhizomorphs. Rhizomorphs resemble plant roots and smell like mushrooms when they are cut open. They are dirty white in colour, sometimes with a yellowy tinge, and can turn brown to black with age. They are commonly 1-2 cm thick but occasionally reach up to 5 cm in thickness [2].

In severely rotted wood, fruiting bodies may be observed. They are succulent, flat, up to 1 cm thick, and pale olive gray with a dirty white to pale yellow margin when young. When mature they become dry and brown to black. The surface is covered with fine pores.

Some other ways to identify Poria Incrassata are through swelling and crumbling of wall plaster, separation of baseboards from the floor and thread like membranes found under floor covering or wallpapers.

How to remove Poria Incrassata?

There are several ways to remove and stop the spread of Poria Incrassata. Thankfully, it is very sensitive to drying and dies quickly without moisture. The first step is to locate the water source that is encouraging the infestation and cut off its supply. This could be a leaky pipe, a puddle or simply the moist soil around the house. In cases when the fungus has developed due to poor construction, it is often feasible to install proper hydroisolation, thus cutting off the rhizopores from the water supply.

Rhizopores and any other fungal growth should be removed by hand or scraped of the foundation using a metal brush. Infected areas should be dried out thoroughly and infected wood should be replaced. Furthermore, pressure treated wood should be used, especially in humid areas which are more prone to the fungus. Also, any contact between wood and soil should be prevented. Problem areas can be dirt-filled porches or terraces; forms left under concrete steps or on foundations; or stumps, debris, or other wood that makes a direct bridge from the soil to the house [2].

In any case, removing a Poria infestation is not a DIY job. Even if caught in its infancy, a Poria infestation can potentially ruin an entire house and definitely warrants the attention of professionals. Substantial construction work often has to be undertaken to rectify the issues that allowed the infestation to occur in the first place.

Poria Incrassata can invade most houses near water sources. However, it often appears in new buildings or houses that have recently been remodeled. Lumber wood can be infected in the warehouse and carry the fungus to the rest of the structure. It can cause serious damage within two to three years if allowed to spread.

How to prevent Poria Incrassata?

Most methods to prevent Poria development are related to the construction phase. Practices that prevent Poria infestations include the use of dry, uninfected lumber and control of soil moisture by proper grading of building sites so that surface water drains away from the foundation. Furthermore, all forms and grade stakes should be removed along with any wood debris and stumps under the building. Crawl spaces and basements should be constructed in a way that they are kept dry, and dirt filled porches and terraces should be avoided.

Practices that should be avoided include the building of flowerbeds where the soil touches siding, wetting wooden walls when sprinkling lawns, letting plumbing leak for long periods, allowing downspouts to become clogged and piling wood or other cellulose material inside the crawl space or against the side of the house [2].

The damage that Poria Incrassata can cause to buildings is massive. It is a frightening fungus which invades and destroys the strength and structural integrity of buildings and wood components. In most cases, it is only caught after a few years of development and the damage caused by it is usually extensive and requires substantial repairs.

If you suspect Poria in your home, don’t hesitate and call a professional mold removal service like Mold Busters immediately. The earlier Poria is caught the better. We offer comprehensive mold testing and removal services and will be able to tell you with certainty whether the mold in your house is Poria or not. Call us today to book an appointment!