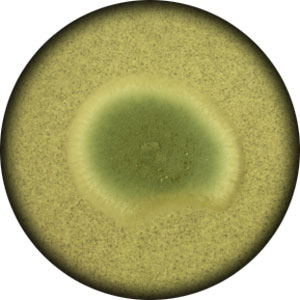 What is Penicillium digitatum?

Penicillium digitatum is a fungus in the family Trichocomaceae, genus Penicillium. It is a pathogen of plants, primarily citrus fruit. It is also known as the green mold of citrus. This fungus is responsible for post-harvest losses of up to 90%. It’s a mesophilic opportunistic fungus mostly non-virulent to humans.

Penicillium digitatum was originally described as Aspergillus digitatus in 1794 by Christian Hendrik Persoon, who in 1801 adopted a new name Monilia digitata published in Synopsis methodica fungorum. M. digitata was also used in 1832 Systema mycologicum written by Elias Magnus Fries, but its current name P. digitatum is adopted by Pier Andrea Saccardo and published in Fungi italici autographie delineati et colorati in 1881. The name of the genus comes from the Latin word “penicillus” which translates to “brush”, which resembles the appearance of the entire genus [1].

Morphology and ecology of Penicillium digitatum

This fungus can often be found on ripe fruit. It starts infection by creating a white mycelium on damaged fruit that spreads in circles (Fig. 1). Germinated spores are yellow-greenish or olive-colored surrounded by a small circle of white mycelium, hence the name green mold. A typical wet rot odor is present in the surrounding infected area probably because fungi produce ethylene, resulting in the rapid senescence of adjacent fruit [3]. Penicillium digitatum reproduces asexually by spores and conidia. Sexual reproduction has not been observed yet.

The industrial significance of Penicillium digitatum

As a necrotrophic pathogen of citrus, P. digitatum starts its infection through the wounds (made by handling and transport) on the surfaces of the fruits. The spores can germinate and grow rapidly when they contact damaged tissue, completing its growth cycle, which results in citrus rot within two days. Post-harvest diseases such as this one can be responsible for losses up to 50% in poorly stored fruits, especially when the humidity is high [4]. Therefore, P. digitatum presents one of the significant problems in the agriculture industry. Affected are not only quantity and quality, but there are also losses in appeal and nutrition, which lowers the market value of the fruit, resulting in heavy economic consequences (Fig. 2) [4].

Overusing chemical fungicides such as imazalil and thiabendazole is common for reducing fruit decay, but this mold is known to be resistant to fungicides. This kind of practice can, therefore, increase health risks for humans [5].

How to prevent Penicillium digitatum?

The infection caused by P. digitatum develops most rapidly at temperatures near 24°C. This way, post-harvest handlings, such as avoiding mechanical damage during the harvest and keeping adequate transport conditions (refrigerated storage ), can reduce post-harvest decay [7].

Storage at 5°C in a high carbon dioxide atmosphere reduces the rot and washing at 40-50°C in detergent or weak alkali solutions, using some fungicides such as benomyl, imazalil, and thiabendazole [6].

From an eco-friendly point of view, some studies have shown that some fungi and bacteria, such as Pantoea agglomerans, Candida famata, Trichoderma viride, and Myrothecium roridum are fungistatic or fungicidal to P. digitatum and demonstrate certain success in reducing green mold decay in citrus. Additionally, Enterobacter cloacae demonstrate an impressive biological activity against P. digitatum [7].

Pseudomonas fluorescens represents a common, cheaper, and eco-friendly solution for bio-control and inhibition of citrus rot [12]. The results of this study show that that the application of P. fluorescens inhibits the mycelium growth and spore germination of P. digitatum. This is likely because P. fluorescens is superior in competing for space and nutrients on the substrata and induces disease resistance. Therefore, P. fluorescens can be potentially used as a bio-control agent against P. digitatum in post-harvest. Also, P. fluorescens is ubiquitous in water, soil, and fruit surfaces and doesn’t pose additional risks to human health. However, more rigorous toxicity tests must be conducted to use this strain as an agent of bio-control [12].

Although fungi from the genus Penicillium rarely use healthy humans as hosts, individuals with a compromised immune system can become infected. Spores can induce some allergic reactions such as hypersensitive pneumonitis or is some serious cases, asthma [8].

Penicillium digitatum, according to some studies, produces a mycotoxin named citrinin [9], which can have nephrotoxic (damages blood vessels and blood flow to kidneys), embryotoxic (adverse effects on embryonic development during the critical period of major organ formation), and cancerogenic properties to humans and animals [10].

Various studies have shown that humans produce antibodies to P. digitatum infections, and only one case of fatality was reported identifying P. digitatum as the cause. However, the diseased individual was an undernourished elderly male diagnosed with asthma and pulmonary emphysema, died from complete renal failure [11].