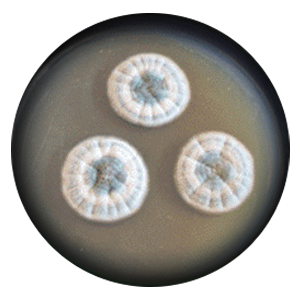 What is Penicillium corylophilum, and where can it be found?

Penicillium corylophilum is a fungus belonging to the subgenus Furcatum of the Penicillium genus [1]. It can commonly be isolated from cereals (barley, paddy rice, wheat), flour, nuts, frozen fruits and cakes, dairy, fruit, and meat products. P. corylophilum often contaminates high-fat foods, such as rapeseed, rapeseed oil, and margarine [1, 2]. It is also frequently found in damp buildings, moldy building materials, wood, and manufactured wood [2]. Studies have shown that P. corylophilum comprised about 5 % of the Penicillium molds isolated from damp buildings in Scandinavia, West Europe, and Japan [2]. This species is also considered entomopathogenic, meaning it parasitizes insects such as houseflies and mosquitoes [3, 4, 5].

Penicillium corylophilum is xerophilic, meaning it can live in environments with low availability of water (substrate water activity) [1].

In the laboratory, it is commonly grown on Czapek Yeast Autolisate Agar (CYA) or Malt Extract Agar (MEA), which produces colonies that are low, velutinous, white to dull green with a dark center (Fig. 1) [1]. Penicillium corylophilum cannot grow at 37°C (98.6 °F) nor germinate at 5°C (41 °F) [1].

P. corylophilum is one of the most commonly isolated species in damp buildings and crawl spaces [2, 8]. Although this species has been reported to produce allergens related to a serious lung disease called hypersensitivity pneumonitis [2], no significant environmental health risk is connected to it [8]. However, P. corylophilum is one of thirty-six fungal species included in ERMI testing (The Environmental Relative Moldiness Index), developed by the U.S. Environmental Protection Agency [9].

Penicillium species can have adverse effects on human health due to their production of certain secondary metabolites [7]. Secondary metabolites are compounds produced when the active growth of fungi has ceased, so they are not directly related to fungal growth, development, and reproduction. They include antibiotics, alkaloids, mycotoxins, and plant growth factors such as gibberellins [10].

Penicillium corylophilum is known to synthesize numerous secondary metabolites. Some exhibit antibacterial activity [11], while others are known for their toxic effects on mosquitoes and other insects [4, 5]. Penicillium corylophilum also produces very harmful compounds such as mycotoxin citrinin and ergot alkaloid epoxyagroclavine [2, 10].

Citrinin (CTN) is initially isolated from Penicillium citrinum, which is the major producer of this mycotoxin from a group of polyketides. It has been reported that other Penicillium species, including P. corylophilum, can produce citrinin [10]. Citrinin is found in different plant products, mainly in grains after harvest and stored grains [12]. It also occurs in beans, vegetables, fruits, herbs, and spices, often with other mycotoxins such as ochratoxin A (OTA) [12]. Multiple animal studies revealed that citrinin is primarily toxic to the kidneys, but it also affects the liver and immune system and can be carcinogenic [12]. The maximum quantity of citrinin allowed in food was recently added to European Union regulations, which indicates that this type of mycotoxin is causing a lot of concern [12].

Epoxyagroclavine belongs to a group of clavine alkaloids, the simplest ergot alkaloids, commonly produced by some Claviceps and Penicillium species [2, 10, 13]. Ergot toxicoses of humans and animals have been known for about two thousand years, with symptoms that include nausea, vomiting, and even psychiatric hallucinations, insomnia, digestive disorders, and gangrene [14]. Ergot alkaloids can be found in grains, food, and bakery products made of contaminated flour [14].

Inhalation and dermal hazards of P. corylophilum haven’t been reported so far. However, it is important to consider some risk factors such as indoor spore level and length of exposure. It is also important to consider that spores, hyphal fragments, and mycotoxins might easily spread from the crawl space to other locations [8].

Increasing knowledge of health risk factors various mold species demands a good identification practice. Cultural and microscopic characteristics of the mycelium and the conidia are a foundation for the identification of microfungal diversity. However, it is estimated that about 50% of mold identifications in literature are incorrect [8]. Therefore, proper identification should be performed by experienced mycologists at the species level.

Considering the air quality, fluctuating humidity may contribute to a high distribution of spores, hyphal fragments, and toxins [8]. Hidden moisture or mold presence in the foundation or inside the outer wall construction should be timely managed since they can significantly affect the indoor environment and contribute to the “sick building syndrome”.