Paecilomyces variotii is a wide-distributed mold that is readily found in composts and soils and a ubiquitous contaminant of foods and raw materials. It belongs to the genus Paecilomyces, most of which are important as soil fungi and insect pathogens. P. variotii is one of only a few common food contaminants in Paecilomyces species. The genus was split from the Penicillium genus due to morphological differences in conidia and phialides (conidia-bearing structures) (1,2).

Paecilomyces variotii has rapidly growing colonies, colored consistently brown to greenish-brown. The colonies are flat, powdery to leathery, and funiculose (rope-like strands) or tufted surfaces. P. variotii colonies are fast-growing and can mature within three days. The conidia-bearing structures consist of loosely branched and irregularly brush-like conidiophores with tapering phialides at the tips. Conidia are single-celled, hyaline, and positioned terminally in chains (Fig. 1). 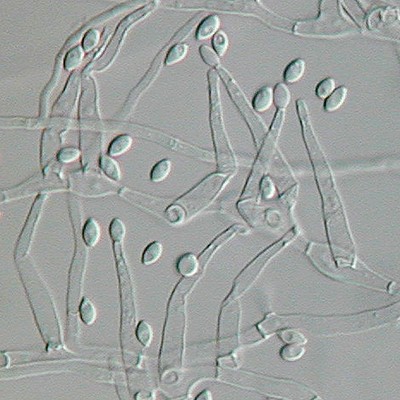 Paecilomyces variotii is thermophilic, growing at temperatures as high as 50–60 °C (122–140 °F) normally. It is also able to withstand short periods at boiling temperatures. This is why this species is a frequent contaminant of food products, especially beverages such as sauces and fruit juices – it can survive pasteurization or other heat-treatments (3).

Another reason why this species is a common contaminant is its resistance to sorbate, which is commonly used as a food preservative. It also is often associated with oily products, such as margarine, edible oils, bacon, coconut, peanut beans, and raw materials containing oil. P. variotii can also be isolated from non-food items such as compost, rubber, glue, urea-formaldehyde foam insulation, and creosote-treated wooden poles (1,3).

Paecilomyces variotii is a heterothallic species, meaning it can reproduce sexually and requires two types of strains (+) and (-) strains to combine to produce the sexual state. Byssochlamys spectabilis is the reported sexual state of P. variotii. Because the ascospores of the sexual state are strongly heat-resistant, it is often that they are the reason for the spoilage of heat-treated food products (3).

Paecilomyces variotii as a human pathogen

Paecilomyces spp. were not viewed as a frequent causative agent of human diseases; however, they are now considered an emerging agent of opportunistic diseases. P. lilacinus and P. variotii are implicated in sporadic reports of serious infections, including most organ systems, and this is especially true for immunocompromised individuals. These two species are morphologically very similar and can be distinguished only by growth rates and spore colors. Interestingly, molecular analyses have shown that these similar species are genetically close and belong to two different orders (2,4,5).

These fungi cause opportunistic mycoses type hyalohyphomycosis (infection caused by non-melanized molds, other than Aspergillus spp. or Penicillium spp.). Paecilomyces are also of clinical interest because of their moderate resistance to antifungal agents. Most cases of Peacilomyces mycoses are involved with immunocompromised patients and are usually cutaneous or catheter-related. However, there are records of infections connected with most organs in the human body. Reported ocular Peacilomyces infections are mostly related to contaminations due to ocular surgeries or prolonged use of eye lenses. Peritonitis (inflammation of the abdomen lining) caused by Peacilomyces spp. is connected with continuous ambulatory peritoneal dialysis (2,4). P. variotii has also been reported to cause sinusitis (inflammation of sinuses) and endophthalmitis (inflammatory condition of the intraocular cavities) (6,7). Wound infection in a transplant recipient and osteomyelitis (bone tissue inflammation) in a patient with the granulomatous disorder as a consequence of P. variotii infection have also been reported (8).

Because P. variotii is commonly found indoors in air samples and dust, carpets, and other textiles, and may be contributing to indoor allergies. It is considered a species characteristic for homes with water damage and is thusly listed in the Group 1 of the ERMI (The Environmental Relative Moldiness Index) list of potentially hazardous fungi (11). P. variotii produces mycotoxin viriditoxin, which potentially has both myotoxic and hemorrhagic activities in animals. Furthermore, viriditoxin is toxic to insects and other microorganisms (9,10). 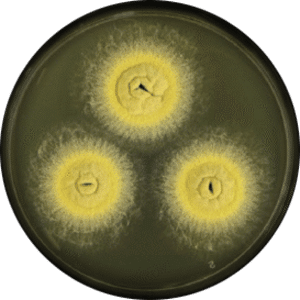