What is Oidium powdery mildew?

Powdery mildew refers to a fungal disease, appearing as white powder on the leaf surface (Fig. 1 – A). These fungi belong to the order Erysiphales of the phylum Ascomycota and have sexual and asexual stages of growth. The genus Oidium comprises the asexual stages of Erysiphales [1, 2]. Based on their morphology, the powdery mildew-causing fungi are classified in the following order: 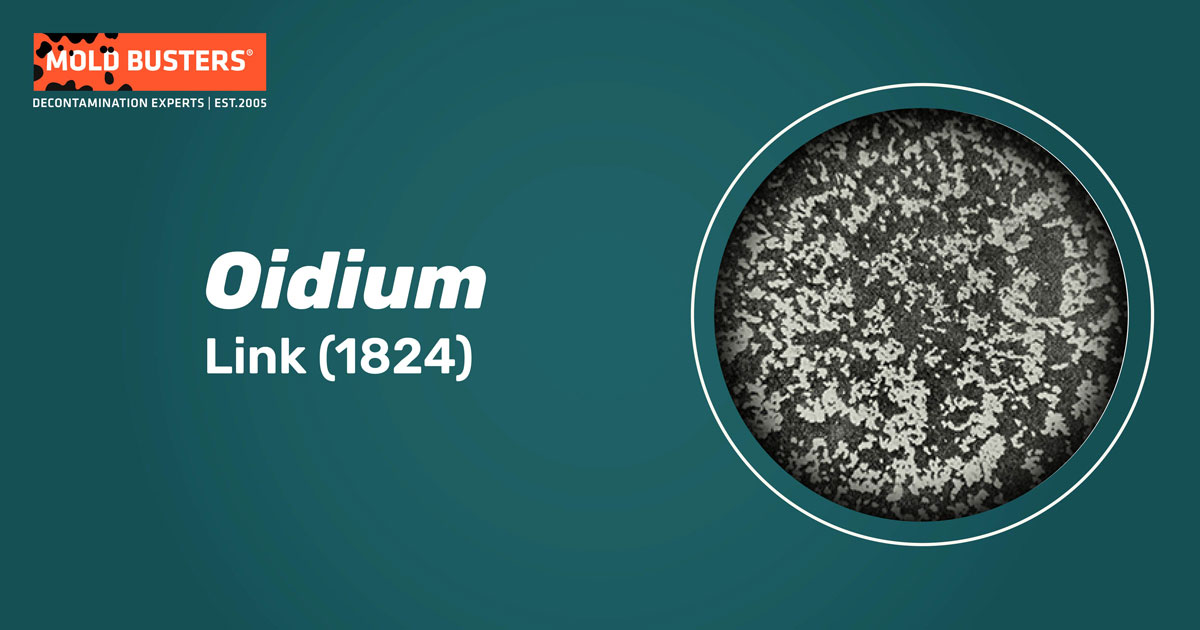 Oidium species are obligate plant pathogens, as they are completely dependent on living hosts. They cannot be cultivated in a laboratory, separate from their hosts [3]. Affecting only flowering plants, powdery mildew can be found on various trees, grapes, beans, cereal crops, crucifers, cucurbits, roses, various trees, and weeds [1, 2]. It is estimated that about 10,000 plant species are susceptible to powdery mildew, making powdery mildew one of the most widespread plant diseases.

Powdery mildews are one of the most common pathogenic fungi in the world, causing yield losses in a wide range of annual and perennial crops: horticultural, ornamental, and industrial crops, forest trees, shrubs, grasses, and other vegetation in tropical, subtropical, and temperate climates [4]. The presence of free water, such as rain, can destroy powdery mildew spores and inhibit their growth. However, atmospheric humidity is required for spore germination, promoting fungal infection [5].

Powdery mildews do not kill their hosts but affect the growth and development of plants due to water and nutrition loss. They may increase transpiration and respiration, affecting photosynthesis and subsequently yield and crop quality [1].

What is Oidium mold?

Infection begins when spores germinate into hyphae, forming the mycelium that starts growing on the surface of the host tissue. From hyphae, structures called appressoria are formed. These structures help the germinating propagule to attach to the leaf surface. When attached, appressoria produce root-like structures that penetrate host cells and absorb water and nutrients. These structures are known as haustoria. Mycelium, well supplied with nutrients, grows and forms conidiophores with numerous conidia that serve to spread infection all over the host [1].

Most powdery mildew species show gray spots or patches on host tissue in the early stages of growth (Fig. 1). If neglected, within a short period, these patches can grow, merge, and fully cover the host’s diseased organs with powdery-looking growth. Mycelial growth commonly appears on the upper side of leaves, while some species can also infect the lower side. The most vulnerable parts of host plants are buds, young leaves, and fruits [1].

While the asexual stage initiates infection and helps its spread, the sexual stage of powdery mildew enables the survival of fungi during the winter. Fruiting bodies keep sexual spores dormant within the host’s buds or other plant tissue until favorable conditions [1].

What are Oidium spores?

Oidium fungi can be easily recognized, but identification on the species level based only on morphology is often difficult. Identification of fungi has been traditionally based on the morphology of the sexual stage, while the asexual stage lacks the characteristics required for classification [1, 6].

However, the asexual stages of related powdery mildew are not uniform [6]. Their conidia (asexual spores) also show a variety in shape and germination type. White-colored conidia are usually arranged in chains, but some species form single conidia or in pseudichains [5, 6]. Conidia are cylindrical to ovoid, with a little variation in size, and can be observed through a hand lens (10x) [1].

They are pinhead-sized structures, completely closed, spherical-shaped, yellow at first and dark brown to black when mature. Chasmotecia is provided with appendages that provide attachment to the host, particularly to the tree bark, where they overwinter (Fig. 3) [1, 5]. They are also of great importance for identifying fungal genera within the Erysiphales order [1, 5]. Asci within cleistothecia are oval, and depending on species, may contain two to eight ascospores. Ascospores are produced at the end of the growing season, and they are released when the wall of the fruiting body cracks [5].

How to treat Oidium?

Chemical fungicides such as have traditionally been used to control powdery mildew. Edible crops are often treated with Tebuconazole with trifloxystrobin, while ornamental can also be treated with triticonazole. Some products have both fungicidal and insecticidal properties, enabling the control of powdery mildew fungi and insects that act as vectors for fungal transmission [7].

Since the widespread use of fungicides has harmed agricultural ecosystems and the planet’s environment, alternative solutions such as mineral salts with fungicidal action have been applied. Mineral salts have a low environmental impact and are safe for human health, activating plant defense mechanisms and enhancing antifungal response [1, 8].

Most commercial products are made for control and prevention but do not eliminate an existing infection. Therefore, good cultural practices should be followed. Starting a control program before powdery mildew occurs or at the earliest sign of detection is strongly recommended  [1, 8]:

Only 12% of tested indoor air quality samples in Canada didn’t have any presence of mold?! Find out more exciting mold stats and facts inside our mold statistics page.