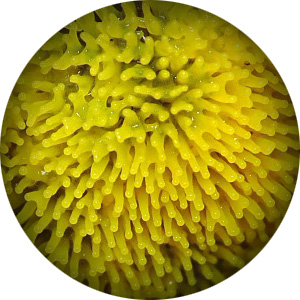 The Myxomycetes, or slime molds, are a group free living amoeboid protists with complicated life cycles. Despite not belonging to the kingdom of fungi, they are usually mentioned in mycology textbooks due to being considered molds for a large part of history. Unlike fungi, which are mostly saprotrophic, the Myxomycetes are free living predators of bacteria and eukaryotic protists.

This article will provide a short review on the subject of slime molds, discussing their life cycles, habitats, classification and their interaction with humans.

Why are Myxomycetes called slime molds?

During the course of history, the Myxomycetes have been variously classified as plants, animals, or fungi. Due to several similarities to true molds (particularly due to their occurrence in similar ecological niches and the production of aerially dispersed spores), Myxomycetes have traditionally been studied by mycologists. In fact, the name most closely associated with the group, first used by the German naturalist Link almost 200 years ago, is derived from the Greek words myxa (which means mucus or slime) and mycetes (referring to fungi) [1].

However, abundant molecular evidence now confirms that they are amoebozoans and not fungi [2]. Interestingly, although the fact that Myxomycetes are protists was first pointed out in the 1800s, Myxomycetes continued to be considered as fungi by most mycologists until the second half of the twentieth century.

What are slime molds?

Although they have the word ‘mold’ in their common name, Myxomycetes aren’t fungi. Unlike true fungi, their cells do not possess chitin, they live a predatory lifestyle and have no role in the decomposition of organic matter. There are approximately 1000 species of slime mold [1].

Morphologically the plasmodium is a veiny network with a viscous, slimy consistency. Most of the life cycle is spent in this stage. Plasmodia may or may not be visible to the naked eye and can be transparent, white or brightly coloured (which is more often the case). The plasmodium is multinucleate and can occupy an area larger than one square meter. However, it is technically still one cell, as it undergoes many nuclear divisions but no true cellular divisions. In fact, a specimen of Brefeldia maxima found in Wales weighed around 20kg – one of the largest single cell organisms ever recorded [3].

If the conditions are right, the plasmodium will begin to produce fruiting bodies. Considering the similarities between a plasmodium with fruiting bodies and a sporulating fungal mycelium, it is no wonder that the Myxomycetes were mistaken for fungi at first.

Although their name is rather unappealing, the fruiting bodies of slime molds exhibit a wide variety of colours, shapes and sizes and are often quite beautiful. Their diverse morphology aside, the primary function of all fruiting bodies is to produce and disperse the spores by which slime molds are propagated.

The spores of Myxomycetes are microscopic and lightweight, and can be carried by wind for considerable distances. They can survive a wide range of adverse conditions, often remaining in a dormant state for prolonged periods. It is not uncommon for spores to germinate years or decades after they were first released.

Interestingly, the spores of slime molds are not the only stages of the life cycle that can remain dormant for a long period. In fact, dormant states exist in both the amoeboflagellate stage and in the plasmodium stage. If the conditions are unfavourable, the amoeboflagellates will undergo a reversible transformation into microcysts, which can remain viable for long periods.

Similarly, in such adverse conditions a plasmodium will harden and transform into a structure called a sclerotium. Due to these adaptations, slime molds are capable of surviving extreme environmental conditions, which is reflected in their wide geographical distribution.

Where can slime molds be found?

Myxomycetes have been observed in every terrestrial habitat investigated to date [1]. They commonly occur in forests, often developing on the bark of living trees, but also on decaying logs, stumps, dead leaves and other organic litter. Similar to true molds, they are mostly associated with cool and moist habitats. Although slime molds are mostly observed on dry land, several species have been reported from aquatic habitats. The plasmodia of these species live completely underwater and only emerge to develop fruiting bodies [4].

Most species have cosmopolitan distribution. However, some species can only be found in the tropics or only in temperate regions. Interestingly, the diversity of slime molds seems to be greater in temperate regions than in the tropics [4]. Experts believe that this is due to a number of reasons, notably due to high amounts of rainfall that wash away most stages of slime mold development, a lack of air movement that is detrimental to spore dispersal, and high humidity that promotes fungal invasion. However, it has also been suggested that the Myxomycetes that occur in tropical forests only occasionally form fruiting bodies, thus evading detection in these already poorly investigated habitats.

Some species of slime molds (known as snowbank species) live at the high altitudes of the Rocky Mountains and the Alps of Europe, often found fruiting on melting snowbanks in late spring and early summer. Also, some species occur in Arctic and Antarctic environments and have been collected from places such as Alaska, Iceland, Greenland, and the Antarctic Peninsula [4].

Additionally, several species have been reported in extremely dry places such as the Atacama Desert, parts of the Arabian Peninsula and in western Mongolia [1].

Although slime molds are not generally associated with indoor environments, it is likely that they exist in our houses in one shape or another. One study that took samples of leaves and stems of common house plants to prepare moist chamber cultures revealed that 70% of the cultures showed development of slime molds, most of them belonging to the Physarales order [5]. Therefore, it is reasonable to assume that slime molds are ubiquitous in nature, and possibly in our homes, although remaining in dormant states for the most part.

Recent phylogenetic analysis divides slime molds into two superclades depending on the appearance of their spores and further into several orders and families. However, researchers suggest that many classical taxa are clearly paraphyletic (meaning that group members are from the same lineage but some descendants are missing) and that their classification is in need of major revision [7].

According to Stephenson and Schnittler [1] the classification of Myxomycetes can be summarised (to the level of order) as follows:

However, associations of Myxomycetes and humans are rare. Although several species are known to form fruiting bodies on living plants, including ornamental plants, grasses and agricultural crops, the damage to the plants is practically non-existent and the slime molds are washed off with the first rain.

Interactions of Myxomycetes and humans are so rare that most people don’t even know what they look like. In fact, a particularly large growth of Fuligo septica in a neighbourhood of Dallas in 1973 caused quite an alarm and even made the nationwide news. The mass broke apart when washed away with water, but the blobs continued to crawl about and increase in size, causing panic amongst citizens. Eventually, the blobs were identified as a nothing more than a slime mold and the excitement waned [4].

In any case, slime molds are usually nothing to worry about. However, if you have any questions about slime molds or any true fungal species, feel free to call Mold Busters today!