Fungi belonging to the genus Mucor are primarily saprophytic and cosmopolitan molds, predominantly found in moist and damp habitats. These fungi are now associated with a polyphyletic but ancient group (phylum) of fungi, Zygomycetes. Polyphyly means that a group of organisms share common characteristics but do not share a common ancestor. It is considered that members of this obsolete species represent one of the most primitive fungal forms, which has diverged very early from the dominant, higher fungi such as Ascomycota and Basidiomycota [1,2,3]. 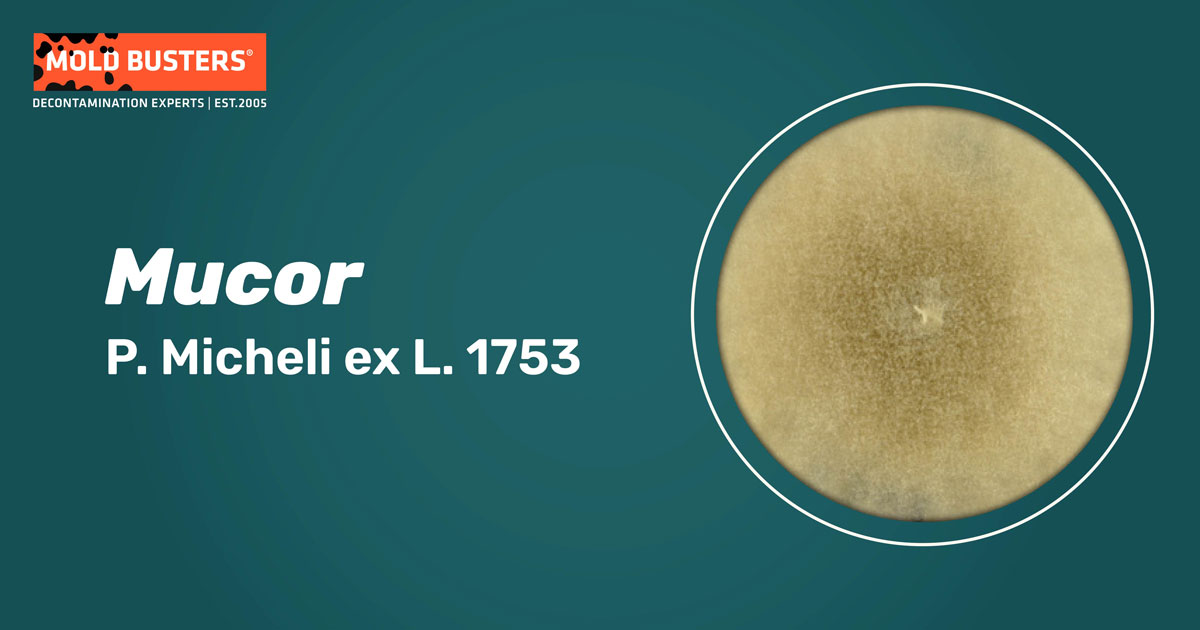 Mucor spp. colonies are typically white, grey to cream-beige. The darker colors of the colony are usually the consequence of maturity and the formation of spores. They are rapid-growing, cottony to fluffy, and can become relatively tall. Cultures grown in culture media readily exceed 1 cm in height (0.4 inches). Mucor spp. colonies consist of white cottony extensively branched mycelium (Fig. 1).

Sporangiospores, a type of asexual spores produced by the Mucor spp., form larger, apical, and globular sporangia. Sporangia are mounted on columnella, supported, and elevated from the rest of the colony by column-shaped structures, sporangiophores (Fig. 2). Sporangiospores are globose, hyaline, gray, or brownish 7-8 µm in diameter [1,2].

Fungi from the Mucor genus can reproduce both asexually and sexually. Asexual reproduction takes place by the production of sporangiospore, oidia, and chlamydospore, while sexual reproduction is conducted via the formation of zygospores (Fig. 3). This genus has both heterothallic (sexes reside in different individuals) and homothallic (sexes reside in the same individual) species. Mucor spp. can also reproduce vegetatively by fragmentation of the whole mycelium, after which individual fragments can become mother colonies [1,2, 10].

Sporangiophores are nonmotile spores that are formed during favorable conditions. They are formed in the sporangia, which walls burst when spores have matured. Insects and wind disperse the spores. Oidia are formed when the fungus grows on a substrate rich in sugars. They are formed as the hypha breaks up into component cells, from which oidia spores are developed. Initially, they can bud-like yeasts and form mycelium afterward. Oidia also can’t survive unfavorable conditions. On the other hand, chlamydospores are thick-walled, nutrition-rich, mycelium segments that survive harsh conditions. They are produced from the hyphae and are released when the mycelium which connects the chlamydospore segments dries out [1, 10].

Sexual reproduction occurs during unfavorable conditions, and in heterothallic species, it occurs between two compatible (different mating types) strains. When the mycelia of two compatible strains are close, they form gametangia which get fused. The walls of these structures dissolve, fuse, and combine their cell content to form a zygospore. When zygospore matures, it will start to produce meiospores which, when released, can form individual mycelium [10].

Where can be Mucor mold found?

Most species of Mucor have a cosmopolitan distribution. They can be found in soil, plants, decaying fruits and vegetables, stored grains, dairy products, and animal dung (Fig. 4). Indoors, their spores can be found in household dust, contained in carpets, and mattresses, ventilation ducts, and can grow on water-damaged structural material [7]. These spores are inhaled by humans daily but are mostly harmless. Luckily, most species of Mucor can’t grow at 37 °C. However, several thermotolerant species exist and are known to cause opportunistic infections in humans and animals.

What is Mucor infection?

Generally speaking, the immune system is well equipped to deal with Mucor infections. However, in immunocompromised patients, the infection can be acute and severe. Mucor infections are characterized by fungal vascular invasion, leading to thrombosis, infarction, and tissue necrosis [5]. After that, these saprophytic fungi will feed on the dead organic matter. Mucor infection occurs in most cases through the inhalation of spores, ingestion through surgical and accidental wounds, ears, nose, nails, and eyes.

Common underlying diseases associated with mucormycosis include diabetes mellitus (with or without diabetic ketoacidosis), hematological malignancies such as leukemia or lymphoma, and solid organ tumors. Other risk factors include HIV, intravenous drug use, low birth weight infants, malnutrition, chronic alcoholism, liver disease, and chemotherapy. Organ transplant recipients and all individuals undergoing corticosteroid therapy are also at risk due to suppressed immunity [4].

Most human infections are caused by M. circinelloides and similar species such as M. indicus, M. ramosissimus, M. irregularis, and M. amphibiorum.

However, M. hiemalis and M. racemosus have also been reported as infectious agents. As they cannot grow at temperatures above 32 °C, their pathogenic role is likely limited to infections of the skin [4].

Along with several other genera belonging to the Mucorales order, Mucor spp. can cause several conditions in humans, collectively called mucormycosis (also referred to as zygomycosis). Mucormycosis can be cutaneous, gastrointestinal, pulmonary, rhinocerebral, or disseminated [5]. Often fatal, mucormycosis usually develops in individuals with a compromised immune system. This can happen due to an already present, underlying disease or due to immune-suppressing therapy.

Mucormycosis pneumonia is one of the most dangerous Mucor-related infections. It is usually associated with pulmonary or rhinocerebral mucormycosis. Prolonged neutropenia (lower-than-normal levels of neutrophils), elevated serum iron, and other pulmonary infections are recognized as the main risk factors for pneumonia of this type. Although it almost always affects immunocompromised patients, there are several reports of it occurring in people with no underlying immune deficiency. Although less common than infections caused by Candida spp. or Aspergillus spp., the mortality rate of mucormycosis pneumonia (60 % or greater) is higher than that of many other fungal pathogens [9].

How to identify Mucor mold in your home?

If it happens to find a suitable environment in your home, Mucor can rapidly develop into a sporulating mold, potentially causing damage to your health. It can usually be found in damp areas of the house, such as bathrooms, areas under sinks, or on any water-damaged structural material. Of course, correctly identifying the mold yourself is difficult, so the best solution is to hire a professional mold testing service.

How to get rid of Mucor mold?

Tackling the mold on your own is rarely a good idea, especially in situations where the mold growth is substantial and well developed. Not only is the mold persistent and difficult to fully eradicate, but by coming into close contact with it, you increase the likeliness of inhaling an excessive number of spores. This can be detrimental to the health of even the fittest person and is usually not worth the risk.

At Mold Busters, we have a proven track record of completely removing any type of mold. Our technicians possess the knowledge, experience, and technology needed to solve any mold-related issue. In addition, we can shed light on any underlying issues that may need to be fixed to ensure that any mold doesn’t reoccur in the future. Call us today to book your appointment.

Chaetomium is the 2nd common toxic mold type found in homes we tested?! Find out more exciting mold stats and facts inside our mold statistics page.