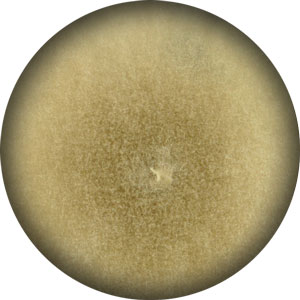 Mucor racemosus is a mold belonging to the order Mucorales and phylum Zygomycota [1, 2]. This species is also known as Chlamydomucor racemosus, Mucor dimorphosporus, Mucor christianesis, and Mucor varians [2]. It commonly inhabits soil, decaying plant material, and buildings. However, its presence is reported in human and animal tissue as well.

Like many other Mucorales species, M. racemosus is capable of switching from filamentous to a yeast-like form. This morphogenetic adaptation called dimorphism enables this mold to colonize a host quickly and is an essential factor of its pathogenicity.

Culture and biology of M. racemosus

M. racemosus is one of the first discovered and isolated soil fungi. It multiplies under aerobic conditions, forming a thick, smoke—grey mycelium up to 40mm high when grown on malt extract agar. The mycelium consists of both aerial and substrate hyphae, which gradually darken due to the accumulation of sporangia with dark sporangiospores.

Sporangia are formed by apical swelling of long, branched sporangiophores. Columellae are oval or ovoid, brownish. Sporangiospores are oval and ellipsoidal, greyish and their function is asexual reproduction [2, 3].

M. racemosus can also be reproduced sexually by zygospores. A single zygospore is enclosed in a zygosporangium formed by the fusion of compatible mating types of hyphae.

In the same medium, but under strictly anaerobic conditions, conversion to yeast form is stimulated as sporangiospores germinate as budding yeast cells.

Where is Mucor racemosus found?

Along with M. hiemalis, M. racemosus is considered the most typical species of the genus Mucor due to its worldwide distribution. The presence of M. racemosus has been reported in Alaska, Greenland, Europe, Africa, Israel, Iraq, India, Indonesia, Brazil, and Chile [2].

Records suggest that it appears equally in a great variety of soils and vegetation types, including forests, wet and dry grasslands, steppe, dunes, salt marshes, and saline soils, caves, mines, sewage sludges, as well as in running freshwater [2].

According to data obtained from soil studies, M. racemosus preferentially colonizes the uppermost soil layers with pH values between 4.4-8. Its growth is strongly enhanced by applying NPK fertilizers and farmyard manure [2].

Being one of the most common inhabitants of soil mycoflora, M. racemosus has also been found on dung, nests, and feathers of free-living birds, in honeycombs, in the air, house dust as well as in the seeds, fruits, and roots of different plants [2, 3]. Like other Zygomicetes, it is widely present in basements, bathrooms, kitchens, laundry rooms, and saunas, and pools [8].

Despite its inability to grow at temperatures higher than 32°C, M. racemosus is considered an infection agent and other Mucor species [4]. Causing no evident issues in healthy people, it is a significant opportunistic pathogen of individuals with compromised immune systems such as children, elderly, and patients chronically diseased from diabetes, metabolic acidosis, AIDS, Ebola, COVID, malignant hematological disorders or treated with corticosteroid drugs due to organ transplantation [5, 6].

The underlying causes influence the clinical manifestation of mucormycosis. For example, people with diabetes usually develop a rhinocerebral form, whereas patients with malignant hematological disease or lymphoma usually suffer from a pulmonary form of mucormycosis. Both forms of the disease are acquired through the inhalation of spores. Ingestion of contaminated food leads to gastrointestinal mucormycosis occurring in infants and transplant recipients. At the same time, direct skin contact causes cutaneous mucormycosis, particularly in neonates and patients with skin burns and trauma [6].

The clinical manifestation of all mucormycosis forms is the rapid necrosis of tissues, resulting from invasion of blood vessels and thrombosis. In most cases, the infection is progressive and fatal [6].

While described forms of mucormycosis are present exclusively in immunocompromised individuals, allergies caused by Mucor species have been reported in immunologically healthy people worldwide [7]. Symptoms include sinusitis, rhinitis, and alveolitis in healthy people, while asthmatic patients are at higher risk due to anaphylactic reaction [8, 9]. Tests based on the production of IgE antibodies specific to Mucor racemosus are widely used in diagnostic sensitivity to Mucor species. They are available for medical and laboratory use in allergen assay [9, 10].

Due to its progressiveness, infections caused by Mucor racemosus are often inadequate to control by antifungal therapy alone. Surgical excision of infected tissue is mandatory in many cases. Other essential factors include early diagnosis and controlling predisposing problems [6]. Because Mucor racemosus is resistant to a wide range of fungistatic drugs [1], preventive measurements must be taken to avoid inhaling its spores or getting in touch with its mycelia. Since M. racemosus is ubiquitous and can be found in any modern building, thorough eradication performed by equipped professionals is recommended.