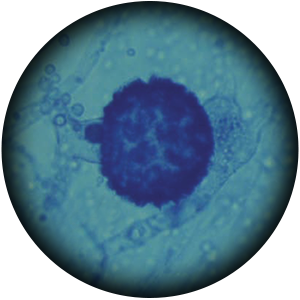 The most studied species from the group are M. amphibiorum, an infamous pathogen of frogs and platypus, and M. indicus, which can be pathogenic to humans. These two species are genetically very close [2] despite growing in different areas.

Where can Mucor amphibiorum and Mucor indicus be found?

Mucor amphibiorum was initially isolated from an infected frog in a German zoo in 1972, after being previously imported from Australia [2]. This species is widely distributed in Australia, where its strains are isolated from amphibian specimens and environmental samples [2]. It is also present in Tasmania, where it is known as the only pathogen that causes significant morbidity and mortality in the platypus (Ornithorhynchus anatinus), which is its only mammalian host [2].

Mucor indicus belongs to a group of fungi that cause uncommon infections in hosts living in tropical areas [3]. Mucor species are also distributed in industrialized countries where they can cause infectious disease – zygomycosis [3]. However, M. indicus is well-known for being used in the food and beer industry [4]. It can grow on different substrates and can also be applied in the industry to remove metals from waste or as fish feed [4], and can also be found on dung or in soil [1]. Still, due to dimorphism, some M. indicus strains are isolated from infected human tissues [1, 3].

Morphological and cultural characteristics of the Mucor amphibiorum group

The colonies of M. amphibiorum species are greyish-brown and slightly aromatic [5].

Sporangiophores are glass-like, upright, and mostly unbranched. Sporangia are dark-brown and up to 75 µm in diameter, containing a membrane that flattens them slightly. Columellae (structures on the tips of conidiophores) are subglobose-shaped to ellipsoidal. Sporangiospores (asexual spores) have smooth walls and a spherical shape, about 3.5-5.5 µm in diameter. Zygospores (sexual spores) are formed by compatible mating types and are spherical, up to 70 x 60 µm in diameter [5].

Mucor amphibiorum group is distinguished by poorly or repetitively simpodially branched sporangiophores (stronger branches forming the primary axis and the weaker branches appearing laterally) and by globose-shaped sporangiospores with small sporangiospores that never exceed 80 µm in diameter (Fig. 1) [1, 5]. Interestingly, the morphology of certain Mucor species depends of the oxygen concentrations present in their surroundings, a phenomenon named fungal dimorphism. In the presence of oxygen, these fungi will propagate filamentous, branching hyphae. However, if deprived of oxygen, Mucor spp. will grow as spherical, multipolar budding yeasts [10].

Health effects of species within the Mucor amphibiorum group

According to data, within the Mucor amphibiorum species, there is a single strain isolated from a human specimen in Germany (strain CNM-CM2934) [1]. However, information about the health effects of M. amphibiorum on humans is still lacking.

However, the pathogenicity of its closely related species, M. indicus, has been reported [6, 7, 8, 9]. M. indicus is considered an opportunistic human pathogen in immunocompromised patients [6]. Infection caused by strains of M. indicus can be described as a rare but typical mucormycosis that is most often acquired by ingestion of contaminated food, spore inhalation, or a wound pathogen [6]. Infection, therefore, can affect the sinuses and central nervous system (rhinocerebral manifestation), the lungs (pulmonary infection), the skin (cutaneous infection), the gastrointestinal system, or can be disseminated, when other organs become affected as well [6, 7].

In contrast to the other Mucor species, which predominantly affect the lungs, nasal sinuses, brain, and skin, the most frequently reported form of mucormycosis caused by M. indicus is gastrointestinal [8]. The reason is that M. indicus is an uncommon pathogen and is usually considered a harmless mold. Moreover, it is used in the food and beer industries and is very important for the good taste of tempeh and many other soybean products [4]. Therefore, a gastrointestinal infection can be easily acquired by ingestion of food products [8] or oral naturopathic medicines [7, 8]. Still, case reports refer to immunocompromised patients such as bone marrow or organ transplants, intravenous drug abusers, or patients with underlying conditions [7, 8, 9]. Gastritis is also considered one of the predisposing factors for developing gastric colonization by fungus [8].

According to reports of case studies, symptoms of gastrointestinal mucormycosis caused by M. indicus include severe abdominal pain, diarrhea, and fever [9]. Sometimes, gastrointestinal bleeding can also be present [8]. The fungus can be easily isolated from the feces culture of infected people [9]. Still, diagnosis can be challenging [6], and M. indicus infections may be underestimated if the isolates are not identified at a species level [8]. Hence, cultural investigation, precise identification, and performing susceptibility testing are required [8].

Treatment of pathogenic species within the Mucor amphibiorum group