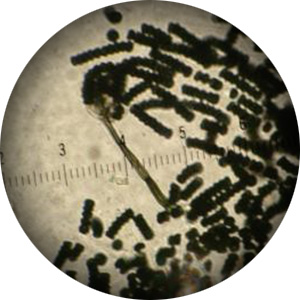 The kingdom of fungi consists of a wide variety of organisms. Most of them are soil colonizing saprobes that feed on decaying material and thus play a vital role in the decomposition of organic matter.

Some of them are obligate parasites of plants, some even attacking economically significant crops, leading to millions of dollars in damages. Others are pathogens of humans and animals.

Most of them are opportunistic pathogens that cause a variety of localized infections. However, many species are truly hazardous and can lead to severe disseminated diseases that can often be fatal. Most species of mold live far away from urbanized areas and are rarely encountered by humans. However, many species of fungus are well adapted to life in and around our homes.

Almost all molds require a significant amount of moisture to develop. In many cases, they find this moisture in our homes. After all, we cannot live without water either and if the water we require manages to reach areas it shouldn’t a mold growth will eventually form.

Memnoniella, a close relative of the infamous Stachybotrys molds, is a mold that commonly develops on water damaged construction material. This article will provide a brief review of the Memnoniella genus, discussing its relationship to Stachybotrys, areas it can occur, as well as its health effects and ways to get rid of it.

There is considerable debate amongst mycologists as to whether Memnoniella is a separate genus or just a synonym for Stachybotrys. The only observable difference between them is viewed in the morphology of their conidia i.e. asexual spores.

Stachybotrys conidia appear as a slimy conidial mass for whereas dry conidial chains are observed in species of Memnoniella. There is no doubt that these two genera are very closely related, so much that many researchers hold the view that they are actually one genus [1].

However, a large number of experts maintain that Memnoniella is a separate genus [2]. There are 19 species currently recognized under the Memnoniella name [3]. The most well known species is M. echinata (occasionally called Stachybotrys echinata), as it is commonly encountered in indoor environments.

Where can Memnoniella be found?

The genus Memnoniella has worldwide distribution. It has been isolated from soil in tropical countries, cellulosic material like paper, wallpaper, cotton, textile, exposed canvas and dead plant material [4].

Memnoniella molds occur in the same environments and conditions as Stachybotrys molds, and they are often found growing together.

Memnoniella is a cellulolytic fungus, meaning that it thrives in the presence of cellulose. It is a common contaminant of wet gypsum board, particularly in warmer climates. It also frequently grows in insulation material and can occasionally be found developing on composite wood and ceiling tiles [5].

Places in your home that you should check for mold include any areas that come into contact with high amounts of moisture. Areas such as bathrooms and kitchens (particularly areas around sinks and piping), laundry rooms, basements and attics can all harbour mold growth.

Similar to Stachybotrys species, Memnoniella species are also tertiary colonizers. This means that they often appear last, i.e. only after the substrate has been colonized by primary and secondary colonizers such as Aspergillus, Penicillium or Cladosporium.

Memnoniella are slow growing on artificial media and natural substrates. Because of this slow growth, it is often overgrown by faster growing fungi such as Aspergillus, Penicillium, Trichoderma, or Rhizopus [4].

Indoor molds may seem harmless at first, but living in their presence for prolonged periods can have a profound effect on your health.

Molds propagate themselves by releasing thousands or even millions of microscopic spores into the surrounding air. Mold spores are present in the air of practically any natural or man-made environment on Earth.

Humans inhale fungal spores every day without any serious issues. In most cases, these foreign bodies are promptly dealt with by the immune system and cause no harm. However, having indoor mold can raise the concentration of spores drastically, so much so that the immune system starts to struggle to deal with such an amount of inhaled spores.

This can lead to a variety of respiratory disorders. Some people are more sensitive than other to allergens such as mold spores. Individuals who are prone to allergies or those who already suffer from a pulmonary disease such as asthma or cystic fibrosis are more likely to have a reaction to fungal spores.

Another at risk group are people with weakened immune systems, such as people suffering from HIV/AIDS, some forms of cancer (particularly haematological malignancies), or those who are undergoing immunosuppressive or corticosteroid therapy, such as organ transplant recipients.

The Stachybotrys genus has received considerable attention in the scientific literature, especially in recent years, as a possible health risk in indoor air, but little information is available on the Memnoniella genus.

Studies indicate that M. echinata can have toxicity similar to that of some isolates of S. chartarum [6]. M.echinata produces a wide variety of mycotoxins such as trichodermol, trichodermin, dechlorogrisseofulvins, memnobotrins A and B, memenoconol and memnoconone [7].

Stachybotrys is well known for its association with outbreaks of pulmonary hemosiderosis among infants in Cleveland during the 1990s. This disease was characterized by coughing up blood and was fatal in 12 cases [8]. The cases received widespread media attention and Stachybotrys was labelled as toxic black mold.

However, the initial studies were reviewed and it was concluded that while the idea that Stachybotrys contributed to the disease could not be excluded, it was not proven either [9].

How to get rid of Memnoniella?

Mold should be removed as soon as it is noticed, regardless of type. Mold of any sort is considered to be a hazardous to human health, especially in cases of prolonged exposure. Molds usually grow in mixed colonies, meaning that a dangerous mold is bound to develop eventually.

Removing small mold growths can be undertaken without professional intervention. The moldy area should be sprayed with a mixture of water and household bleach and brushed until traces of the mold are no longer visible.

Any agitation of the mold triggers the release of airborne spores, so the correct precautions should be observed prior to beginning such a task. It is advisable to wear protective clothing and a respirator. The area should be well ventilated, preferably with a fan blowing the contaminated air out. Any air conditioning systems should be turned off and sealed in order to prevent the spores from entering the system.

In many cases, people remove the mold successfully only for it to return after a couple of weeks. This is because although you can remove the visible mold, you can’t really get rid of fungal spores. They are all around us whether we like it or not. If the mold is removed but the area remains damp, it is only a matter of time before a spore lands on the damp area and develops into a mold.

The only way to truly get rid of the mold is to get rid of the moisture. Large mold infestations are typically caused by underlying moisture related issues. This can be due to poorly planned construction, leaky plumbing, inadequate draining, poor hydroisolation and so on. In most cases getting these issues sorted is a prerequisite for removing the mold.

Mold Busters has been in the mold remediation business for over 15 years. During this time, we have amassed a vast amount of practical experience when dealing with mold. We offer a comprehensive set of mold remediation services at competitive prices.

We offer services such as air quality testing, mold testing and mold removal. Our experienced technicians are equipped with the latest in mold removal technology and can handle a mold infestation of any type.

Call us today to book an appointment.