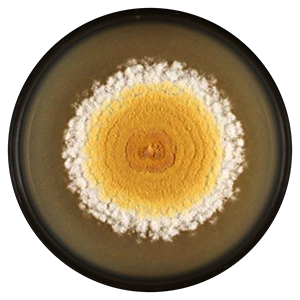 Species of the genus Malbranchea have been known since the 19th century. This genus includes mesophilic and thermophilic organisms. Although they have been known for a long time, little is generally known about the species. They do not cause significant household damage, and there are only a few reported cases of diseases caused by these species.

Saccardo first described species of the genus Malbranchea in 1882. These fungi are like many others isolated from soil, droppings, and disintegrated vegetation (1). Most species are mesophilic, although there are also thermophiles (2). Colonies of Malbranchea sp. develop rapidly at 25℃. The colonies may be flat or furrowed. Their texture varies and can be cottony, woolly, or powdery. Their color also varied from white, dark red to brown, and sometimes can be dark gold.

Malbranchea sp. is microscopically very similar to the fungus Coccidioides immitis due to the existence of the same structures, which has caused problems in the past. However, scientists have proven through a series of tests and experiments that fungi still differ in small differences in certain structures (1).

Although species of the genus Malbranchea are taxonomically close to human and animal pathogens, little is known to cause the disease, and few cases have been reported, especially in the literature (3). Many studies have been done to investigate species of this genus better and to point out possible infections. A study was performed on 245 patients with fungal infections of the nails and skin, and Malbranchea sp. was isolated in only 1% of skin samples. In other studies, only 0,3% of Malbranchea sp. cases showed coexistence with primary pathogens of tuberculosis patients (2).

The genus Malbranchea numbers a lot of species, and some of them are not human pathogens, while some can cause diseases. It is assumed that molecular analyzes will reveal some more species of this genus.

Malbranchea cinnamomea is a thermophilic fungus. The minimum temperature for its growth is 20℃. This fungus is isolated from higher-temperature environments, most often from sun-heated desert soil. It has the capability of degrading plant biomass (4). Colonies grown in the laboratory at 45℃ were sulfur yellow, dense, smooth with a few outer folds with thick, creamy yellow bundles of hyphae (5). M. cinnamomea produces an antibiotic named malbranicin, which has antimicrobial activities against Gram-positive bacteria (4).

Malbranchea pulchella is not a thermophillic fungi. It has a worldwide distribution and is isolated from soil and decaying vegetation. The colonies are white, sulfur yellow to brown. The reverse of the colony is a reddish-brown, often reddish diffusible pigment (6). So far, only two cases have been reported in which Malbranchea pulchella has caused human disease, although it is not considered a pathogen (7). This species is also important for its ability to produce several enzymes, and the most important of these are thermostable cellulolytic enzymes (8).

Any mold is potentially dangerous. Mold can grow everywhere, on a variety of different surfaces. The type of mold that grows in the indoor environment is especially dangerous for people who have allergies. This is because they produce spores that spread through the air and reach human respiratory organs very easily. In addition to the negative consequences for humans, mold can destroy pieces of furniture, plants, and food. Although the literature has not reported that Malbranchea mold is dangerous or toxic, care should still be taken.

If you happen to see mold anywhere in your household, you should remove it immediately. Even a small amount can gradually spread and significantly affect your health. To prevent the growth of mold indoor, the best option is constant moisture control. It is also important that the house is ventilated and clean.

Mold can be removed by wiping the surface, preferably with antifungal agents. Even though you have removed the mold visible to the naked eye, spores and mycelium remain. Therefore, it is important to ventilate the room. The best and safest solution for removing mold is to seek help from a professional mold removal service, and they can also give you helpful tips in preventing mold. So, call Mold Busters and make an appointment.