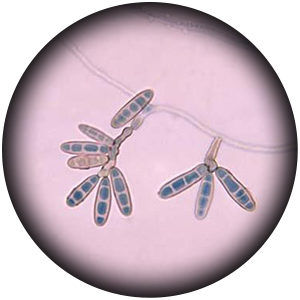 Helminthosporium is a fungal genus belonging to the order Pleopsporales. This genus reproduces asexually, and the fungi are dispersed through conidia (asexual spores). [3] Helminthosporium spp. are primarily saprobes, living on dead or decaying plant matter, but certain species can also infect economically important crop plants. [8]

Helminthosporium spp. have septated hyphae. The color of conidiophores (spore-bearing structures) varies from brown to dark brown. Conidia are multicellular with six or more cells; they are solitary, large, elongated, and pale to dark brown. [6]

The genus Helminthosporium was described in 1809. This genus became the repository for many newly-described species, only some of which were congeneric with the type species. Considering that the genus has many species and many of them have been assigned to other genera, we will mention only the most common species in this article. [1]

So far, there has been no case of infection caused by Helminthosporium in humans or animals. What is thought to be Helminthosporioum mold is usually Dreschslera sp., Bipolaris sp., or Exseohilum sp. molds. All four mentioned genera are under Pleosporales order and can be morphologically similar to some species from the Helminthosporioum genus.

Bipolaris sp., previously classified as Helminthosporium mold, can be commonly found in our homes. This fungus loves moist surfaces so that it can grow on walls or the bathroom ceiling. In addition, you can find it on different types of food, such as bread, corn, and fruits. This fungus can produce mycotoxins, which have serious adverse effects on animals and cause internal organs disfunction. In humans, this fungus can cause allergic reactions once inhaled and even cause more serious diseases such as phaeohyphomycosis. Spores of the fungus attach to the sinuses and start growing, which can induce very painful sensations. This kind of infection must be treated immediately, often combining anti-fungal medications and surgery. [9]

Where can Helminthosporium be found?

Helminthosporium species are common in warm and humid areas. They also grow on several crop species, especially on a maze. They are frequently associated with grass infections. Furthermore, Helminthosporium spp. can be found on rotting food items and vegetables. [2]

Leaf spot is a general term for many diseases caused by different fungi. Leaf spot-causing fungi from the Helminthosporium genus can grow over a wide range of temperatures during the whole year. The most optimal periods for infections are fall and winter since these periods tend to have high humidity, and this is because they require winds and rainfall for conidia dispersal.

Disease symptoms are brown to purple lesions and spots, which can vary in size. As the infection progresses, expanded lesions with bleached centers that girdle the leaf blade appears (Fig. 1). Severely infected leaves turn purple or reddish-brown. This disease can be managed with the application of several different types of fungicides. [7]

Helminthosporium maydis, H.oryzae, H. turcikum are pathogens on cultivated and wild Poaceae spp. (grasses), palms, beans, and coffee plants. They are associated with leaf spots and blights. Their ability to cause devastating disease has occasionally resulted in significant economic loss. In addition, mycotoxins produced by these species contaminate animal fed and are toxic to domestic animals.

Helminthosporium solani is a plant pathogen that causes the disease known as the silver scurf of potatoes. The fungus causes a cosmetic effect on the tuber in the form of a surface blemish, which gives the tuber a dirty and unhealthy appearance (Fig. 2). This disease has become economically important since the food industry cannot use potatoes infected with the silver scurf. [4]

During the colder months in North America, fungi from the Bipolaris, Dreschlera, Curvularia, and Exserohilum genera can cause turfgrass disease. The symptoms severity of the turf disease depends on the pathogen and the weather conditions. Infected grass can have dark or white spots or patches (Fig. 3). This disease diminishes backyards and gardens aesthetics and produces a lot of spores, which can infect other plants. Additionally, a high amount of the spore inoculum can be unhealthy to immunocompromised allergic individuals. In such a case, the best thing to do is contact remediation professionals who can apply the proper fungicide treatment [10].