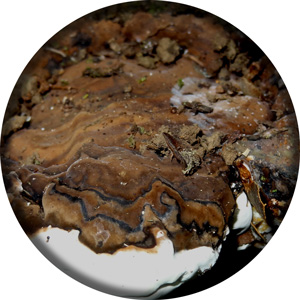 Ganoderma is a genus of fungi that are renowned for their medicinal and pharmacological properties. In China, Japan and other Asian countries, Ganoderma mushrooms have been recognized as medically relevant for over 2000 years [1]. The fruiting bodies of Ganoderma have a fan-like appearance and grow on the trunks of dead or living trees.

Often referred to as Lingzhi, Reishi, or Mannentake, the medicinal benefits of Ganoderma were first exploited in Asian countries and are fast moving to the West. Traditionally, Ganoderma extracts were prepared only using the fruiting bodies, which take several months to develop. However, due to demand for year-round production, medicinal extracts are now also prepared from spores, mycelia and culture broths. Today, the estimated annual market value of Ganoderma products in Asia is over US$ 2.5 billion [2].

Ganoderma is found worldwide. They possess enzymes which allow them to break down wood, which means they are not always beneficial. In fact, some species are known to devastate various agricultural plantations. G. zonatum is well known for its deadly effect on palm trees and G. applanatum is a common cause of decay and death of many sorts of trees, such as beech, poplar, apple, elm, chestnut, maple, oak, walnut, willow, fir, spruce and several others. Interestingly, this species was responsible for the loss of the Anne Frank Tree in Amsterdam.

According to current taxonomy, there are 219 species in the Ganoderma genus. They can be found all over the world. They are polypores and come in a wide range of sizes, shapes and colours (red, yellow, green, purple, black, blue, and white). Also, species of Ganoderma differ by their host specificity and geographic distribution.

G. lucidum is the type species of the Ganoderma genus and is very common in tropical areas. It has a white surface that turns its colour to near-brown when touched. As they grow, the delicate white appearance changes to a shiny woody one.

Where can Ganoderma be found at home?

Ganoderma grows on tree stumps of hardwoods, on logs and sometimes at the base of a tree. To find them at home, you can check the stumps of conifers; hemlocks in particular, which they prefer most. You can also check palm trees, maples, oaks, and elms for Ganoderma. Dead decaying logs and trees growing in eroded infertile soil are the best places to check.

Ganoderma is unlikely to grow on young and actively growing trees – it is commonly found on older trees that are sufficiently wet [3].

Are you wondering how to identify Ganoderma at home? Luckily, as polypore fungi, they are easy to spot. They are often called bracket or shelf fungi and form large fan shaped fruiting bodies. They are hard to the touch, with a leathery feel, meaning they are resilient and can last for many years.

What are benefits of Ganoderma?

Ganoderma has been used as a herbal medicine for over 2000 years. The many beliefs regarding the health effects of Ganoderma are rooted in tradition, culture and anecdotal evidence. However, recent scientific reports provide some support to the proclaimed health benefits of Ganoderma.

Hundreds of metabolites have been isolated from Ganoderma species, mostly polysaccharides, steroids and triterpens but also alkaloids, glycoproteins, phenols and vitamins. In combination, many of them are reported to have some of the following properties [2]:

Although there is scientific evidence to support all of these effects, most studies are performed on animals or in cell culture models. Studies of the effects on humans are often small and inconclusive, and are often in disagreement with in vitro findings [1]. Therefore, large, well designed clinical trials are needed to truly cement the medical benefit of Ganoderma species.

With that said, it is doubtful that Ganoderma use would last for thousands of years and grow into a multi-billion dollar industry if it didn’t have any medical benefit. But, Ganoderma supplements are not magic pills. As with many things, it is often difficult to distinguish truth and facts from marketing techniques. Be wary of products claiming to be a cure for everything, and try to do your own research to see if they can really help you.

Health Risks and Dangers of Ganoderma

Contrary to its positive effects on humans, Ganoderma can be very deadly to plants. Its species can lead to disease that causes rot and makes trees fall when not managed promptly; which can cause harm to people and property. Ganoderma related diseases have caused massive economic losses, particularly in the oil palm industry (which is worth over US $20 billion annually in Malaysia and Indonesia) [4].

Before taking Ganoderma, consult your doctor especially if you are already undergoing medication. It can be very dangerous for people with immunosuppressive sicknesses, those on chemotherapy and those using blood thinners/clotters. Pregnant and nursing women should avoid using Ganoderma as its effects on such conditions are not clear. It can lead to bleeding, which is also very dangerous for individuals with thrombocytopenia or those undergoing surgery. Powdered Ganoderma has been associated with toxic effects on the liver and should not be taken for more than one month [5].

Consult your doctor before taking Ganoderma if:

Side effects of Ganoderma

Apart from being highly nutritious and beneficial for health, Ganoderma has some drawbacks as well. These include:

Although beneficial to humans, Ganoderma can be bad news for palm trees and their owners. Specifically, G. zonatum causes “Ganoderma butt rot of palms”. It degrades the wood in the lower part of the palm and eventually leads to its death. G. zonatum doesn’t cause disease in any other plant family. But it’s not picky when it comes to palms, and has been reported in at least 65 species of palm tree. Ganoderma butt rot is a major problem in Florida and there are currently no ways to prevent the disease or to cure infected trees [7].

How do you get rid of Ganoderma?

Getting rid of Ganoderma is not an easy task, especially since there are still no fungicides available that are effective against them. Farmers of palm trees and other trees of economic value are left with only one option: mechanical control.

It is recommended that any tree affected by Ganoderma rot should be uprooted completely. It should then be incinerated or disposed of at a permitted landfill to avoid spreading to uninfected trees. The soil where the tree was should also be removed since planting another tree there will lead to another infection.

Proper management of wood lots is recommended. Cut down old trees before they rot and become hosts to Ganoderma. It is also wise to separate palm trees from hardwood trees that can spread Ganoderma. Surgical removal is effective when correctly done at the initial stages.