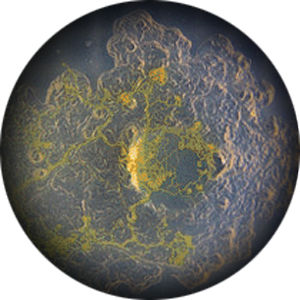 Fuligo septica is a mold commonly known as scrambled egg slime mold or dog vomit slime mold (1). Although people mainly associate slime molds with the kingdom of Fungi, F. septica is, in fact, not a fungus at all. This peculiar slime mold belongs to the class Myxomycetes, or slime molds, in the Protista Kingdom (2, 3).

The body of F. septica is a mass of protoplasm (the cell’s living content inside the cell membrane that consists of biomolecules, salts, and water) referred to as a plasmodium, which is slimy and vicious in appearance. When environmental conditions are fit for reproduction (enough food and adequate temperature, humidity, and pH levels), fruiting bodies (aethalia) develop from the plasmodium, which then releases spores into the environment (3).

The plasmodium of F. septica is cushion-shaped (pulvinate), and its color can vary from white or beige to bright pink, greenish and yellow. However, as the name scrambled egg slime mold might suggest, it is most often bright yellow. The plasmodium of F. septica is usually easy to spot, ranging from 2 to 20 cm (0.79 to 7.87 inches) in length and 1 to 3 cm (0.39 to 1.18 inches) thick. This is one of the reasons why F. septica is one of the most conspicuous and best-known slime molds. The spores can be dark gray, light purplish, or black. What sets F. septica and the rest of the Physarales order apart from other slime molds is the presence of lime (calcium hydroxide) in the fruiting bodies (1, 3).

Fuligo septica belongs to the class Myxomycetes, otherwise known as slime molds, acellular slime molds, or myxogastrids. These organisms were previously considered to be fungi and were predominantly studied by mycologists because of their ability to form fruiting bodies and spores (2). On the other hand, due to the viscous properties of plasmodia, Myxomycetes are capable of movement (a property previously primarily associated with animals) by changing their form, which enables them to crawl on the surfaces they inhabit and ingest bacteria, yeasts, algae, amebae or detritus they may come across (3, 6).

This combination of characteristics and features had long baffled scientists about the correct classification of these molds. Finally, thanks to the progress in molecular identification methods in recent years, these molds are now classified as amoeboid Protista, primitive organisms that are neither animals, plants nor fungi, but share a common ancestor with these eukaryotic organisms. Ironically, the name Myxomycetes still reflects their mycological history, as it is derived from the Greek words myxa, which means slime, and mycetes or mykes, which refers to fungus (2). The full scientific classification of F. septica is as follows:

Fuligo septica is one of the most widely distributed species of Myxomycetes (3). This mold is often spotted in forests or in fields and pastures, where it can be found on decaying wood, beneath the bark of both decaying and healthy trees, and in the soil (1, 3). It requires moisture to grow and procreate.  In populated areas, F. septica can sometimes be seen growing on ornamental plants, lawns, and in parks, as well as in graveyards or by the side of river canals, roads, railway lines, and wood yards (4). Although it can occasionally appear on agricultural plants, it is not a plant pathogen, and there aren’t many reports of crop damage caused by this mold (3).

Even though slime molds commonly grow in damp and cool habitats, F. septica has adapted to several unique environments. It can be found in deserts, growing on decaying cacti and animal dung (3, 5, 6), and in soil and caves with high concentrations of heavy metals, such as zinc, copper, and lead (4).

As can be concluded from the characteristics mentioned above and habitats, F. septica is a unique organism adapted to an impressively broad spectrum of environmental conditions. Another extraordinary property of this mold is its ability to survive in environments with markedly high zinc levels (Zn), easily tolerate, and even accumulate extreme concentrations of this heavy metal. Studies have shown that this tolerance is possible due to the synthesis of fuligorubin A. This yellow pigment gives the plasmodium of F. septica its custard yellow color and forms chelating complexes with Zn, which transforms the metal into its inactive form. This mechanism may also apply to other heavy metals, providing F. septica with an impressive tolerance to toxic elements. This slime mold’s heavy metal accumulation property shows significant potential for application in bioremediation, which is a process that uses microorganisms or plants to remove toxins from different contaminated environments, mainly from soil (5, 6).

There have been reports of indigenous people in Mexico who collect, fry, and eat the plasmodium of F. septica before forming fruiting bodies (1, 3). However, this mold is considered to be inedible by most field guides. In general, its consumption is not recommended, as the potential health hazards of ingesting F. septica are unknown.

So far, there aren’t any reports of human infections caused by F. septica. Although this mold may cause concern when spotted (because of its conspicuous appearance), it is generally considered non-toxic and harmless to people.  However, there are a few reports of mild allergic reactions to Myxomycetes spores, including F. septica, in skin prick tests (7). Because of this, it might be prudent to consult mold removal experts about proper treatment and removal if this mold is present in your home, garden, or work environment.