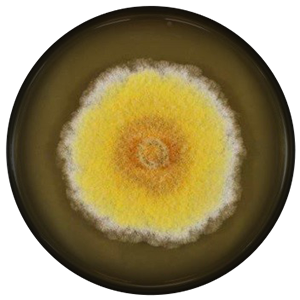 Eurotium chevalieri is the sexual state of the species Aspergillus chevalieri [1] that belongs to the division Ascomycota. Genus Aspergillus is an example in mycology where dual naming applies [2, 3]. It contains five subgenera that produce species with both asexual (reproduce by cloning and fragmentation) and sexual (reproduce by spores) states [2, 4]. Eurotium species are xerophytic, which means that they grow in environments with low availability of water, and this way can cause spoilage of dry or concentrated materials [2]. The main morphological characteristic of the Eurotium species is forming a bright yellow fruit body known as cleistothecia [2, 5].

Like other aspergilli, Eurotium chevalieri is a ubiquitous soil-borne fungus [6]. It can be found in building materials, dust, leather, softwood, and textiles [5]. Since modern heating systems remove moisture from buildings, xerophytic molds are among the dominant portion of indoor fungal communities. It can be readily found in museums, libraries, and homes on the floor, carpet, and mattress dust [5, 6, 7]. E. chevalieri is also associated with dried seeds and milled foodstuffs [6]. Being able to grow on stored cereals, grain, dry, and preserved foods with high sugar content, Eurotium species are known as spoiling fungi, causing significant economic losses in food commodities [8].

Colonies of E. chevalieri grown on Potato Dextrose Agar (PDA) reach 7 cm (2.76 inches) in diameter after ten days at a temperature of 30 °C (86 °F) [1]. They are grey in the central areas [1], with abundant, bright yellow cleistothecia, typical for Eurotium species [2]. Cleistothecia can be seen on the medium as a continuous yellow layer (Fig. 1) [1]. Every ascus in cleistothecia consists of eight lens-shaped ascospores, approximately 4.5×3.4 µm in diameter [2].

E. chevalieri and most species closely related to it grow on Czapek Yeast Agar (CYA), or Malt Yeast Extract Agar (MYA) supplemented with 20% sucrose (CY20S and M60Y) [8]. The growth ability on these media at 37 °C (45 °F) is a reliable characteristic for distinguishing morphologically similar species within the Aspergillus (Eurotium) genus [8].

E. chevalieri is one of the most common Eurotium species that is usually associated with changes in the nutritional quality and sensory properties of raw materials and processed food items, affecting shelf-life and leading to secondary metabolites [8].

Secondary metabolites are compounds produced by fungi that are not essential for their growth and reproduction but can play an important role in their survival in nature. Some of them are significant for human health, positively (antibiotics) or negatively (mycotoxins). Although some of its metabolites, such as echinulin or sterigmatocystin, are considered hazardous [11, 12], E. chevalieri is not associated with the production of mycotoxins.

Fungi such as E. chevalieri can change macroconditions favorable for the growth of mycotoxin-producing filamentous fungi [8, 10]. The growth of xerophytic fungi, including E. chevalieri, causes the release of metabolic water, increasing moisture content in contaminated material [10]. This enables the growth of mesophilic species (with higher water requirement), which can be toxic to humans (Alternaria spp., Penicillium spp., and Fusarium spp.) [10]. Along with Eurotium rubrum, E. repens, and E. amstelodami, E. chevalieri is a common spoilage factor for dehydrated food items such as flour, pasta, bakery products, cereals, spices, nuts, dried fruit, and meat [13]. This fungal species is also isolated from cheese [12], chocolate products [14], medicinal herbs [15], and animal feed [8, 11].

Eurotium chevalieri is reported as one of the most common mold species in indoor environments, composing up to 88% of the fungal spore profile isolated from house dust of Japanese homes [7]. However, there are very few reports referring to its effect on human health. E. chevalieri is considered a rare opportunistic pathogen. Its pathogenicity was reported for the first time in 1994 when three cases of cutaneous (skin) aspergillosis were described [16]. In all reported cases, the infection followed previous skin trauma [16]. E. chevalieri has also been isolated in clinical cases of aspergillosis such as cerebral, respiratory, eye, sinus, and ear infections [17].

There is little published data on antifungal susceptibility of members of the section Aspergillus (Eurotium). According to the reports, E. chevalieri is sensitive to antifungal drugs such as posaconazole, anidulafungin, micafungin, amphotericin B, itraconazole, oxiconazole, anirofine, and voriconazole [16, 17].