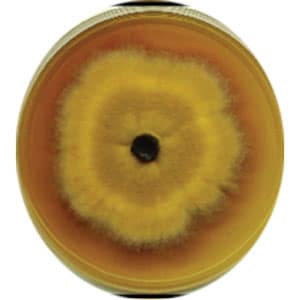 Fungi are a large group of diverse organisms. Most of them are largely unknown to humans, while others are famous due to enabling important technological advances, such as the synthesis of antibiotics from Penicillium or the manufacture of bioethanol by Aspergillus tubingensis.

Epicoccum is a group of molds that are significant to humans from two very different aspects. Namely, they are important allergens that cause problems from millions of people around the world. On the other hand, they produce a wide array of diverse secondary metabolites that have found use in many technological settings.

This article will provide an overview of the Epicoccum genus, discussing its taxonomy, distribution, technological uses as well as its allergic potential and health effects on humans.

Epicoccum is a genus of saprophytic mold that occur worldwide. They are able to grow between -3°C and 45°C, with optimum growth at 23-28°C and are known to colonize a wide variety of environmental settings [1]. Epicoccum is notable for the wide array of secondary metabolites it produces, making it valuable to humans from the aspect of biomedicine, industry and agriculture [2]. It is a common allergen but rarely causes systemic diseases in humans [3].

Others count up to 12 separate species [6]. This confusion stems from the fact that E. nigrum is highly genetically variable and possesses many distinct morphological and physiological varieties. It is often difficult to accept what constitutes a distinct species as opposed to just a different strain or variety, and this is why some taxonomists regard E. nigrum as a single species whereas others propose the reclassification of E. nigrum into multiple species.

Where can Epicoccum be found?

Epicoccum can colonize an extremely wide variety of substrates. It lives in soil all over the world and is often associated with aging or decaying plant material. It is also a phytopathogen, causing leaf spot disease in many plants. It is an agent of food spoilage and has been known to develop on apples, cantaloupes, fresh vegetables, nuts and cereals, rice, wheat, maize, pecans, peanuts, cashews, soybean and frozen or cured meats [7]. Interestingly Epicoccum can also colonize freshwater and marine environments and has been isolated from sediment, sponges, algae and other sea plants [8].

Indoors, Epicoccum can occur on many water damaged materials, such as gypsum boards, floors, wood, paper and textiles. It has also been isolated from carpet and mattress dust, as well as from house plants.

Epicoccum is considered to be a secondary colonizer, meaning it often only appears after another mold has already contaminated the substrate [1]. Studies have shown that Epicoccum is able to colonize the filters of hospital air-conditioning systems, and one study even confirmed its presence in 3 out of 7 hospitals observed [9].

As part of the data analysis presented inside our mold statistics resource page, we have calculated how often mold spore types appear in different parts of the indoor environment when mold levels are elevated. Below are the stats for Epicoccum:

Many species of fungi produce compounds known as secondary metabolites. They are termed “secondary” as they are not required for any primary functions, such as survival, growth or reproduction. The reason fungi allocate energy resources for the synthesis of these non essential compounds is a mystery in many cases.

Epicoccum produces many structurally, chemically and biologically diverse secondary metabolites. The majority of these compounds have promising biological activities, including antibiotic, antimicrobial, antifungal, anticancer and HIV inhibiting activities. Many of its compounds are pigmented and have been considered as natural replacements for artificial pigments currently used in food. Epicoccum is also used for the synthesis of silver and gold nanoparticles [2].

Epicoccum is also used in agriculture for the control of fungal plant pathogens. E. nigrum has been used as a biological control agent against Monilinia spp. in peaches and nectarines against Sclerotinia sclerotiorum in sunflowers and against Pythium in cotton [4].

Epicoccum spores are ubiquitous in the air around us, both in indoor and outdoor environments. It is thought that humans inhale hundreds or even thousands of fungal spores every day.

For most people this is a normal occurrence and doesn’t lead to any obvious symptoms. However, people that are sensitive to airborne allergens or people who already suffer from a pulmonary disease such as asthma, cystic fibrosis or tuberculosis can show a reaction to fungal spores. In any case, indoor mold colonies release spores into the air when they mature. This leads to an increased concentration of spores, which in turn increases the risk of developing an allergic reaction, regardless of sensitivity or predisposition.

Epicoccum is considered to be one of the most important fungal allergens. They are responsible for inducing several respiratory allergy disorders, such as upper and lower respiratory tract disease, rhinitis, sinusitis and asthma. Elevated concentrations of Epicoccum spores may induce or worsen asthma attacks in children [1]. Epicoccum spores have been reported to be the cause of severe allergic disorders, including hypersensitivity pneumonitis and allergic fungal sinusitis in 5-7% of different populations worldwide [3].

Perhaps the high allergenic potential of Epicoccum spores can be explained by the fact that they generate allergens both before and after germination. Many other fungal spores (such as spores of Penicillium chrysogenum or Aspergillus fumigatus) only release allergens after they germinate [1].

Aside from allergic reactions, Epicoccum is not a significant genus of fungi in the context of human health. It is regarded as non infectious and even when it is isolated from clinical samples it is presumed to be a contaminant [1]. However, there are a number of reports of systemic Epicoccum infections in immunocompromised patients – including one intramuscular infection [10] and a fatal blood borne infection in a severely immunosuppressed hematopoietic stem cell transplant recipient [11].

How to get rid of Epicoccum?

Any mold can be dangerous if it lives in your vicinity for prolonged periods. Even though Epicoccum isn’t known for causing serious health effects, it is a major allergen and irritant and something that shouldn’t be tolerated in the house. Furthermore, as Epicoccum is regarded as a secondary colonizer, its presence indicates that other potentially more dangerous fungi are present as well.

Removing a minor mold infestation can be a DIY job. The mold should be treated with a solution of water and household bleach and scrubbed with a brush until no signs of the mold are visible.

It is advisable to wear protective clothing and headgear while undertaking such a task. Any agitation of the mold will stimulate spore release, so the correct precautions should be taken. In addition, the area should be well ventilated and any dehumidifying or air-conditioning systems should be sealed and shut off in order to prevent spores from entering the system.

Larger mold infestations are typically caused by underlying moisture related issues, such as poor isolation, leaking roofs, windows or pipes. In many cases the source of moisture is unclear and difficult to pinpoint. Large, deep rooted mold infestations can be a nightmare to deal with, as the mold is well developed, the air is rich with spores and the mold propagates quickly.

These cases require the involvement of a professional mold remediation service more often than not.

We have 15 years of experience and a proven track record of removing mold infestations of any scale. Our technicians possess the knowledge and the technology to remove mold from any residence, and can additionally provide assistance in rectifying any underlying issues. Call us today to book your appointment.