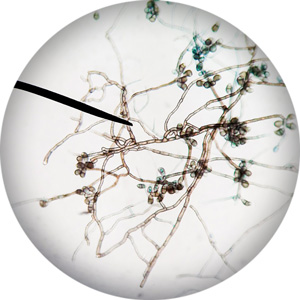 From poisonous mushrooms to toxic molds, fungi have always posed a threat to humans. Although most species of fungi live as saprobes in nature and are vital for the proper function of many ecosystems, some are harmful pathogens of plants, animals and humans and can affect us directly.

Curvularia can be regarded as one of the most important genera of fungi when considering their overall significance to humans. This group of molds can affect humans in three aspects: they grow indoors, they parasite on important crops, and are harmful to human health.

This article will provide a brief review of the Curvularia genus, its species and their impact on human life.

Curvularia is a genus of fungi that mostly consists of plant pathogens, although several of its species can be harmful to humans as well. The majority of Curvularia species exist as grass pathogens or as saprobes occurring on plant material, dung and soil. However, more than 10 species of this genus have been reported to cause opportunistic diseases in humans.

Depending on route of infection and immune status of the host, they range from mild superficial infections to severe invasive diseases.

Curvularia can be found on all continents but many species are limited to tropic and subtropic regions. Apart from being pathogenic to humans, they are also significant to humans in the context of agriculture, as they can colonize important staple crops such as maize, wheat and barley. Although it is primarily an outdoor fungus, Curvularia is often isolated from indoor building materials, albeit mostly from wooden structures.

The Curvularia genus contains about 80 species [1]. They are closely related to the Bipolaris genus, and several well known and clinically relevant Bipolaris species have been transferred to the Curvularia genus in recent years (notably B. australiensis, B. hawaiiensis and B. spicifera) [2].

Curvularia species are all anamorphs, i.e. they use asexual reproduction only. Thier teleomorph forms are described in the Cochliobolus and Pseudocochliobolus genera [4].

Curvularia as a plant pathogen

Along with the closely related Bipolaris genus, Curvularia can cause a wide range of serious plant diseases, particularly affecting cereals and grasses. Some species cause devastating diseases on staple food crops such as barley, maize, rice, sorghum and wheat that result in significant yield losses, with some researchers estimating the annual losses to be up to $US 10 billion annually [5].

Curvularia can also affect garden plants and lawns, especially in warmer climates. Lawn grass can dry out despite frequent watering and can thin out or become patchy. The leaves of other plants turn yellow and brown from the tip down or start to show lightly coloured spots.

Curvularia can cause a wide range of infections in humans. Apart from causing relatively harmless issues concerning the skin and nails, Curvularia is often associated with cases of fungal sinusitis and keratitis (eye infection). In fact, Curvularia is the third most prevalent cause of fungal keratitis in certain regions of the USA [6].

Curvularia can also cause serious invasive diseases such as endocarditis (infection of the inner lining of the heart chambers and valves), peritonitis, mycetoma, pulmonary infection, cerebral infection and subcutaneous phaeohyphomycosis [3].

Serious infections usually occur in immunocompromised individuals, such as people suffering from HIV/AIDS, people undergoing chemotherapy or those on immunosuppressive medication due to an organ transplant. Despite this fact, even completely healthy people have been known to develop invasive diseases related to Curvularia [7].

Most mold related health issues arise from contact with their spores, usually by inhalation. Fungal spores are precisely the reason why mold can be so dangerous.

At first, a mold growth on a wall may seem completely harmless. They usually grow out of harm’s way and don’t seem to pose an immediate danger to anyone. However, upon maturation the mold releases thousands if not millions of spores into the surrounding air. These spores float in the air and are inhaled by humans and animals on a daily basis. They are usually dealt with promptly by the immune system.

However, in many cases the immune system fails to deal with the threat and an infection occurs. Therefore, it is best to keep the spore count to a minimum as an extremely high concentration of spores can cause trouble for even the strongest immune systems.

Curvularia spores are relatively large and their spores therefore often remain in the nose or sinus after inhalation. Rarely, a chronic, allergic sinusitis may be provoked in patients with existing allergic rhinitis (hay fever) [8]. C. lunata especially is known to cause allergic reactions in humans, and shares allergenic components with other fungal allergens such as Alternaria alternata and Epicoccum nigrum [9].

Treatment of Curvularia infections depends on the site of infection. Diseases of the skin and nails may be treated by use of antifungal creams or powders. Serious invasive infections usually require oral therapy. However, the optimal antifungal therapy for Curvularia infection is not known, and responses to treatment with amphotericin B, miconazole, ketoconazole, terbinafine and itraconazole have been reported [10].

How to identify Curvularia?

Curvularia molds are described as rapidly growing, woolly or velvety to the touch and gray to grayish-black or brown in colour. They are most likely to be found in damp areas of the home, such as bathroom and kitchens (especially areas under sinks), window frames, leaky roofs or moist basements. They usually colonize wooden structures.

Their spores are ubiquitous and can be found both indoors and outdoors. Indoors, they can often be part of household dust and are often found in high amounts in carpets and mattresses.

Curvularia is almost impossible to identify without professional help. As with most molds, they can only be identified by their spores – which can only be viewed under a microscope.

How to remove Curvularia?

If you happen to observe any mold growth in your home or office you should get it removed as soon as possible. Most types of indoor mold can pose a threat to human health, especially to people who have underlying pulmonary issues, weakened immune systems or those who frequently suffer from allergies.

Mold can be extremely persistent and troublesome to remove. In most cases, underlying issues such as leaky pipes or other moisture related construction issues need to be dealt with in order to remove the mold once and for all. If these issues remain, the mold will always return after a few weeks as there is no way of removing mold spores from the air entirely. Eventually a spore will land in a suitable place and the cycle will start over. Therefore, sorting out any humidity issues is a priority, as the mold thrives on humidity and will quickly die once the environment dries out.

You can attempt to remove the mold on your own but undertaking any mold removal yourself is not advisable without appropriate protective clothing and headgear. Any agitation of the mold will release a massive amount of spores into the air and inhaling fungal spores in such a large concentration can have adverse effects on even the healthiest person.

In most cases, mold removal is best left to the professionals. At Mold Busters we have an experienced team of technicians that have the technology and the know-how to remove mold infestations of any scale.

We offer a comprehensive set of services, including air sampling, dehumidifying, mold testing and mold removal.

In addition, we can point out any underlying issues that need fixing and give advice on the steps that need to be taken in order to make your residence mold free for the foreseeable future. Call us today to book an appointment.