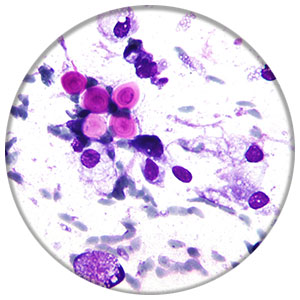 Cryptococcus is a genus of fungi with global distribution. They grow as single celled organisms, known as yeasts. Several species cause cryptococcosis, a potentially fatal disease, especially in individuals with weak immune systems. The sexual (teleomorph) forms of Cryptococcus are filamentous fungi in the Filobasidiella genus.

Although cryptococcosis was identified in 1894, it only became recognized as a major threat to human health with the onset of the AIDS pandemic in the 1980s. While mostly known as a disease of the immunocompromised, recent outbreaks of cryptococcosis in otherwise healthy individuals in North America and Canada (known as the Pacific Northwest outbreak) have caused the genus to gain even more attention [1].

There are about 37 species of Cryptococcus that have been identified by scientists. However, as this genus is of extreme interest, its taxonomy is constantly being re-evaluated. Most species colonize the soil and are not harmful to humans. Nevertheless, pathogenic species are widespread and present a danger to many people worldwide. Here is a list of a few of them:

Where does Cryptococcus usually appear in home?

Cryptococcus is very dangerous as it causes cryptococcosis, a potentially fatal disease. Depending on the site of infection, cryptococcosis can be divided into three categories:

Globally, this disease affects approximately 1 million people per annum, with 625 000 of them having a fatal outcome. Evidenced by the numbers above, cryptococcosis is often fatal, even when treated. Estimated fatality rates differ by region, from 9% in high income regions, 55% in low/middle income regions, and up to 70% in sub-Saharan Africa [5], where it has surpassed tuberculosis as the most lethal opportunistic infection of AIDS patients [6].

Cryptococcus causes cryptococcosis, which is very dangerous and even deadly if left untreated for long.

In cases where a lung infection develops, it has signs that can be confused for pneumonia, such as coughing and shortness of breath. Sharp chest pain and bloody sputum also result from its effects on the lungs.

However, although cryptococcosis is contracted by inhalation, the most common clinical manifestation is meningitis. Symptoms typically develop within 1-2 weeks and include fever, malaise, headache, stiffness of the neck, photophobia, nausea and vomiting [7].

Diagnosis and treatment of Cryptococcosis

Cryptococcosis is medically diagnosed by taking samples of cerebrospinal fluid and examining them through culture and immunodiagnostic tests. The culture of infected fluid will develop cream coloured colonies within 3-7 days.

X-ray tests may also be done to establish the extent of damage done to the lungs.

After diagnosis, cryptococcosis is treated by use of antifungal medication, such as amphotericin B, flucytosine and fluconazole. Sadly, in many cases the treatment is ineffective.

How to identify Cryptococcus in your home?

As this is a microscopic, single celled organism, identifying it is a challenge. Obviously, it cannot be observed without a microscope. However, even if you don’t have access to one, there are a few things you can do aside from contacting a professional mold removal service.

First and foremost, research widely on Cryptococcus and the symptoms of the diseases it causes. Knowledge is power and will enable you to identify cryptococcosis before it’s too late.

At times, you might also opt for veterinary diagnosis of cryptococcosis in pets and other domestic animals. Be on the lookout for pigeon droppings and take them in for further analysis if you feel suspicious.

Monitoring signs and symptoms of Cryptococcus infection among your family members is encouraged. If you’ve had a case of cryptococcosis before, you can easily identify its re-occurrence if you notice signs and symptoms coming back.

How is Cryptococcosis contracted?

Cryptococcus is an airborne fungus. Inhaling air that contains Cryptococcus introduces the fungi into your system. It first attacks the lungs before disseminating through the blood to other organs, notably the brain.

However, avoiding Cryptococcus isn’t something you should worry about too much, as chances are you’ve already come into contact with it. If you’ve ever been to a park, you’ve likely been exposed to Cryptococcus. In fact, most children above the age of 2 are already producing antibodies against C. neoformans [8]. However, just because we have antibodies against it doesn’t mean it’s safe to inhale large amounts of this fungus. Avoiding contact in the first place is a safer bet than relying on your immune system to deal with the threat.

In fact, Cryptococcus has a remarkable capacity to avoid and deceive the immune system (even using phagocytes to spread within the body), and can result in latent infections with no symptoms. This latent infection can subsequently surface, perhaps even years after contraction, causing serious illness [1].

Cases of cryptococcosis being spread from one person to another have not been established. It is mostly an opportunistic disease which tends to take advantage of people whose immune systems aren’t functioning properly.

How to prevent Cryptococcal infection?

The best way of avoiding Cryptococcus infection is by avoiding contact with birds and bird droppings, especially if your immune system is not up to the task. With that said, maintaining a strong and healthy immune system is also a good bet.

Avoid contact with soil or dust that is likely to contain bird droppings. People on treatment for cryptococcosis should adhere to the medication to ensure that the disease does not advance or reoccur.

How to get rid of Cryptococcus?

To get rid of Cryptococcus, you must get rid of pigeon droppings first. This implies ensuring that pigeons are not anywhere near your immediate environment. In most cases, putting up anti-roosting spikes, netting, and sealing of any points of entry will do the trick. Some people love and even keep pigeons, but if Cryptococcus happens to have invaded your home, it is time to think twice about the pigeons.

Use garlic in your day-to-day life, which is the most common household remedy for many fungal infections. In case of less dangerous fungal infections, you can mix olive or coconut oil with garlic paste and apply well to affected areas. However if you suspect cryptococcosis see a doctor immediately.

You can use professional services like those offered by Mold Busters to ensure your home is clear of Cryptococcus. We have a proven track record when it comes to dealing with fungi and we have the experience and the technology needed to make your home secure.