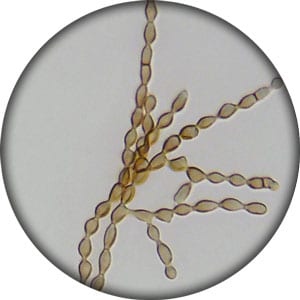 Cladosporium cladosporioides is an asexual, widespread mold that occurs on a wide range of outdoors and indoor surfaces and materials. It is a frequent saprophyte and is a common agent of secondary infections of dying parts of plants. C. cladosporioides is one of the most frequent (outdoor) airborne fungi but is also very common indoors, growing on moist building materials, paint, wallpaper, textiles, tiles, and wet window sills. It infects economically important crops such as strawberries, and in rare, causes infections in humans (8,9).

Cladosporium cladosporioides is xerophilic, xerotolerant, and a psychrophilic organism. This means that it is tolerant to both dry and cold conditions (10). It can grow at freezing temperatures, and its enzymes can remain active at temperatures between -10°C and -3°C (14°F and 26.6°F). All these capabilities are likely the reason why C. cladosporioides has such a wide cosmopolitan range. Even though the species grows all almost throughout the year, it achieves peak sporulation in the summer (11). It commonly occurs as a secondary infection on necrotic parts of many different host plants. Its spores can be isolated from air, soil, textiles, and many other substrates (2).

In general, C. cladosporioides colonies appear velvety or powdery and are olive-green to olive-brown. Colony morphology will vary depending on the growth media (12). Cultivating on the potato dextrose agar medium (PDA), the colonies will appear as olive-grey to dull green, velvety, tufted, and feathery on the edges. On PDA, C. cladosporioides diffuses to the media and rarely grows above the surface, only occasionally forming prominent hyphal exudates (12). Colonies on malt extract agar (MEA) medium grow pale olive-grey or whitish due to aerial mycelium but form darker edges.

Cladosporium cladosporioides as a plant pathogen

The species is most known as one of the agents of Cladosporium fruit rot of red wine grapevines and strawberry blossom blight. Moreover, C. cladosporioides is also known to infect crops such as wheat, peas, blackberry, raspberry, and spinach. Generally, the fungus causes little actual damage to the infected fruit. However, because the mycelial growth is unappealing, the fruit becomes unmarketable (13).

The incidence of the Cladosporium red wine rot infection is higher when the harvest of the grapes is delayed. The delaying of the grape harvest is necessary as the grapes need to fully ripen so that the various phenolic compounds can contribute to the aroma and flavor of the fruit, and consequently, to the vine. This disease is well-known to attack the Cabernet Sauvignon vineyards of South America (14). Symptoms of the disease are most pronounced on fully matured grapes and are displayed as dehydration, olive-green mold cover, and a small, firm area of decay. Unfortunately, the practice of leaf removal works well against most other fungi; as it decreases the inoculate pressure; however, it has been shown that in the case of grapevine rot to be counter-indicated. The only solution to the disease is to shorten the sun exposure time of the plants and hasten the grape harvest.

Cladosporium cladosporioides as a human and an animal pathogen

Cladosporium cladosporioides can cause human mycotic infections, although rare and predominantly concerning superficial infection cases (3–5). However, several systemic problems such as phaeohyphomycosis, respiratory inflammation, or asthmatic and allergic reactions have been recorded. Due to certain compounds, such as beta-glucans and other allergens, present on the surface of spores, C. cladosporioides can trigger asthmatic reactions (15). Interestingly, in one case report, C. cladosporioides was isolated from cerebrospinal fluid and a brain biopsy specimen of a human patient, which was severely immunocompromised (8).

It was shown that in rats, spores of C. cladosporioides can stimulate alveolar macrophages to produce macrophage inflammatory proteins and keratinocyte chemoattractant, thereby inducing respiratory inflammation and diseases such as allergic alveolitis and atopic asthma (16). However, the severity of the response seems to be concentration-dependent. Moreover, one report described a German shepherd dog diagnosed with encephalitis and nephritis due to infection of C. cladosporioides. Further examination found brainstem and cerebellar lesions caused by the fungus, which were likely responsible for abnormal limb reflexes, altered behavior, depression, and loss of vision (17).