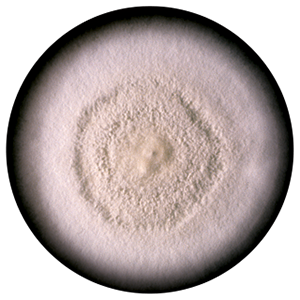 Chrysosporium is a genus belonging to the phylum Ascomycota within the kingdom of Fungi. Chrysosporium sp. are mostly known as keratinophilic fungi, being specialized to degrade keratin. Keratin is an important protein with a structural and protective role in skin, hair, and nails. Some species within this genus invade keratinized tissues and are causative agents of dermatophytoses in animals and humans [1–3]. Besides this, they usually live as saprotrophs feeding on the keratin-rich remainings of dead animals. Chrysosporium species are important links for recycling nutrients (carbon, nitrogen, and sulfur) in nature. Since the soil represents the most usual habitat for these fungi, they are classified as geophilic (“soil loving”) dermatophytes.

Chrysosporium sp. usually grow moderately at 25°C and display various colony morphologies. Colonies may appear granular or powdery, woolly or cottony, and can be raised or flat. They can also vary in colors, including white, yellow, or tan to pale brown on the front and white to brown on the back. Like other Ascomycetes, the hyphae of this genus are septated. Conidium is an asexual non-motile spore in fungi, and in Chrysosporium spp. are typically hyaline (transparent), pyriform (three-angled) to clavate (club-shaped) with truncate bases, and are broader than hyphae (Fig. 1). They can be smooth or rough-walled. Hyphae often differentiate into the chain of asexual spores, arthroconidium, and has a larger diameter than the parent hyphae. It has a role in fungal dispersion. Traditionally, Chrysosporium sp. were differentiated from each other by the growth conditions, the colony appearance, morphology, size, and the location of the conidia. However, due to poor morphological differentiation, Chyrysosporium sp. are not easy to identify and were often misidentified with other genera such as Geomyces, Malbranchea, or Sporotrichum [1].  The Chrysosporium genus revealed complex phylogenetic  relationships within this genus [3, 4].

The diversity of the Chrysosporium genus

C. pannicola, C. keratinophilum, and C. tropicumare fast colonizers of human hair [5]. C. keratinophilumis also known to perforate and degrade buffalo, goat, cow, dog, and horsehair. This fungus can invade all three main structural components of the hair: cortex, medulla, and cuticle. The hair is digested by the enzyme called keratinase. The digestions are firstly manifested by undulation, lifting, and disrupting the cuticle, and in further steps, hyphae penetrate and damaging the hair cortex. Besides hair, C. queenslandicum and C. tropicum are also known to degrade feathers [6]. Due to its enormous keratinophilic potential, C. queenslandicum has been investigated for its usage in biotechnology to recycle poultry waste [7].

Additionally, some representatives of this genus are associated with other non-keratinous substrates [5]. For example, C. lucknowense is a highly potent producer of enzyme cellulase and was proposed for usage in the production of biofuels [8]. A study has shown that Chrysosporium sp. can produce 19 different types of enzymes [5], revealing the high biotechnological potential of this genus.

Interestingly, there is> Chrysosporium species found only on classic French cheese, C. sulfureum [9]. This fungus grows as a secondary invader on older cheese, which has already been populated with other fungal species, such as Penicillium and Scopulariopsis.

Where can Chrysosporium be found?

Chrysosporium species have been found in many different habitats around the world. These fungi live in natural environments and are abundant in the keratin-rich remains of dead animals in the soil, such as hair and feathers [10]. They have also been detected in the plant material and animal dung [3]. There are contradictory reports on these fungi being found as a part of the house dust microbiome. While one study reported they are not frequently found as a part of dust microbial communities [11], the other detected C. lucknowense as the most common dermatophyte in 42% of tested samples [12]. Interestingly, this fungus was found to be most abundant during April.

The Chrysosporium sp. that have been isolated from a human nail and superficial skin infections include C. keratinophilum, C. tropicum, and C. queenlandicum. They usually cause mild infections in humans and are sometimes responsible for onychomycosis. Several serious disease cases have been reported so far, and most were regarding immunocompromised individuals [13]. For example, invasive sinus mycosis due to C. tropicum infection has been described in patients with acquired immunodeficiency [3]. In one case, there was also a report of a massive subcutaneous infection in healthy women caused by C. keratinophilum [2].