What is Chaetomium globosum?

Chaetomium globosum is the most commonly found species of the genus Chaetomium [1], which belongs to the family Chaetomiaceae, order Sordiales, and division of Ascomycota. It was originally described by Gustav Kunze in 1817 [2,3].

As a widespread cellulolytic and endophytic fungus, it was found on different substrates: soil, air marine environments [1,4], on various crops, particularly wheat, barley, rice, beans, and soybeans [5]. C. globosum is one of the most common fungi isolated from damp building materials, especially on wallboard, solid wood, textiles, manufactured wood, ceiling tiles, and frequently found on insulation [6].

Chaetomium globosum produces a number of toxins: chaetoglobsins A, C and F [6,7], chaetoviridin A, chaetomugilin D, chetomin [6], and cochliodones [8]. On the other hand, it produces other secondary metabolites with a great potential for biological control that could be implemented in the agricultural, medicinal, and industrial fields [1,7]. In damp materials, they may evolve as the dominant fungal colonizers [9]. 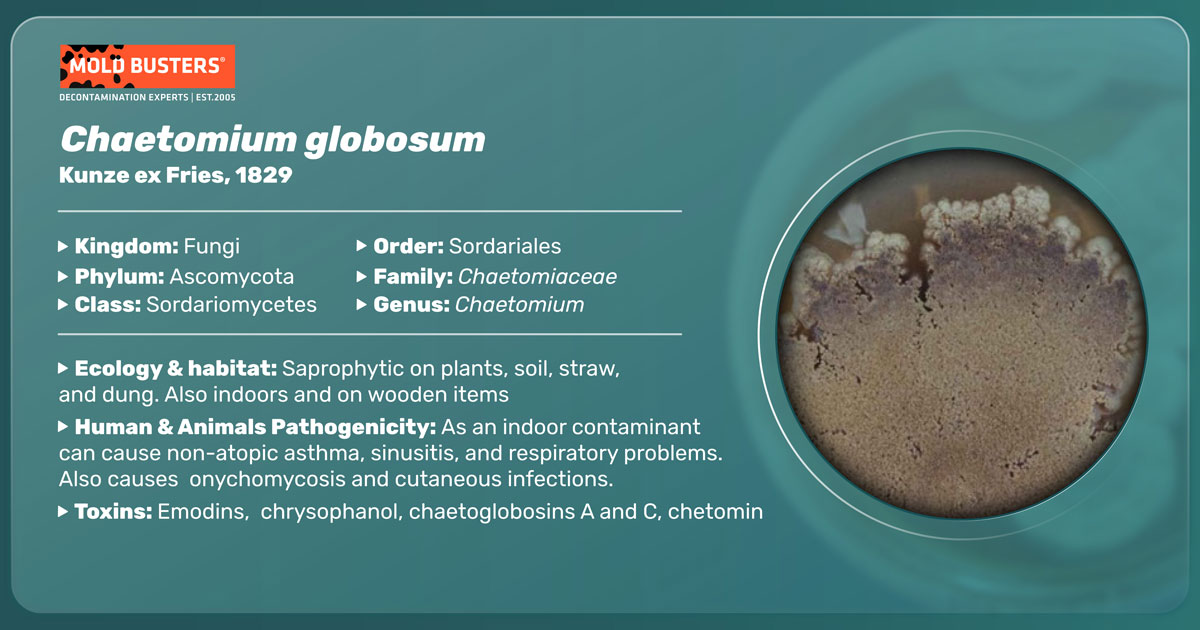 Chaetomium globosum forms a sparse white colony that becomes grayish or olive when sporulate, precisely when it forms black reproductive structures called perithecia. Inside of perithecia, asci were formed with plenty of spheroidal to ellipsoidal or apiculate ascospores. Chaetomium globosum generally does not produce asexual spores. Colony reverse is tan to red or brown to black (Fig.1) [4,5].

How to recognize Chaetomium globosum mold?

Being a cellulolytic fungus, Chaetomium globosum be found, causing discoloration on old books and similar artifacts or textiles [3]. On paper, it produces characteristic yellow-grayish-brown stains [11]. It is also found on different building materials containing cellulose, such as timber and plywood, or synthetic building materials, such as plastics. If conditions are favorable, it forms dense mycelia on a large area and degrades it in time, affecting materials structure [9].

What are adverse effects of Chaetomium globosum?

C. globosum is a common contaminant in indoor environments. It has adverse effects on human health due to the production of mycotoxins, volatile compounds, and airborne fungal fragments or ascospores. When those volatiles or fungal fragments are inhaled, they may contribute to the development of rhinitis or asthma symptoms [1]. It acts as an allergen, produces mycotoxins, and usually causes skin and nail infections. It rarely causes cerebral and systemic infections [4], can also contaminate dialysis fluid [3]. As with any other fungi, safe levels are considered less than 500 spores/m3[12].

Some secondary metabolites of Chaetomium globosum have toxic properties: chaetoglobosin A has low toxicity to mice, while chetomin is moderately toxic to rats [6]. Both chaetoglobosins and chetomins are highly cytotoxic, affecting cell division, locomotion, formation of cell surface projections, and glucose transport [4]. C. globosum hyphae and the spores contain antigens such as Chg45 that induce the production of IgE and IgG antibodies in allergic individuals. This can lead to non-atopic asthma, sinusitis, and respiratory illnesses [6].

Agricultural research revealed that C. globosum exhibits insecticidal, fungicidal, and plant growth-promoting activity. C. globosum can have adverse effects on different pests, such as cotton aphids, beet armyworms, and root-knot nematode, and thus shows potential to be used as a biological agent [4].