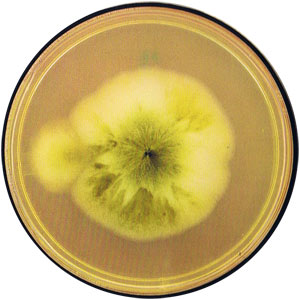 One of the most common problems in countless households all over the world is mold. It can be the cause of endless frustration and possible health risks.

Aureobasidium pullulans is one such species of mold. Let’s take a closer look at this potential health hazard, what its characteristics are, and what we can do to keep ourselves safe from its ill effects.

The Aureobasidium genus comprises of over 15 species or varieties. The taxonomy of the Aureobasidium genus is still an area of dispute, with species often being reclassified as varieties and vice versa [1, 2]. One thing everyone can agree upon is that A. pullulans is the most widely known and most studied species. With a worldwide distribution, it is very common in moist environments and usually grows on plants, soil, fruit, wood, and in fresh water.

Aureobasidium colonies may be pink or black in colour. A. pullulans, in particular, is initially cream to pink in colour with a flat, smooth, and moist texture. Over time, it gets darker and becomes velvety. Its spores can be distributed by wind upon drying. It grows in a wide range of climates and may appear alongside Cladosporium.

What are known species of Aureobasidium?

There are quite a few species of Aureobasidium to be found all over the world living in all types of conditions imaginable. The four major ones are A. pullulans, A. melanogenum, A. subglaciale, and A. namibiae. Owing to its ability to produce pullulan (a natural polymer which is widely used in several industries)[3], A. pullulans is the most well-known species of Aureobasidium.

Members of the Aureobasidium genus are known to display a wide variety of morphological characteristics depending on environmental conditions. This is due to extreme genetic instability (which is what makes their classification so difficult)[2]. What this means in everyday terms is that these fungi can basically morph into what they want, when they want. This is what enables them to thrive equally well in freezing salt water, rainforests, and a variety of indoor environments.

As our knowledge about these molds grows and we continue to discover new strains, the list will probably continue to grow.

What is Aureobasidium mold?

This is a type of fungus that appears as a blackish colony as it grows and spreads. Depending on where exactly it establishes and how old it is, this colour may range from cream or pink to the more common black coloration.

Aureobasidium molds come in a variety of different species, but the most well-known of them all is A. pullulans, which is known best due to its use in biotechnology.

Where can Aureobasidium molds grow?

As with most types of mold, Aureobasidium tends to grow in places that are warm and damp. This is why it’s so common to find mold in bathrooms, attics, basements, laundry rooms, and so on.

One of the characteristics of Aureobasidium that makes it such a prevalent problem is its remarkable ability to adapt and survive in all sorts of conditions. It has the ability to survive and grow in extreme heat or cold, highly acidic environments, and even water with a high salt concentration [1].

In nature, it is common to find the mold growing on plants and vegetables such as green beans, cabbage, apples, grapes, cucumber and others, although it doesn’t cause any harm to them [4].

Aureobasidium and your health

A. pullulans is a common allergen [5], causing allergic reactions such as asthma, hay fever, hypersensitivity pneumonitis and humidifier fever. However, this mold is not a primary human pathogen and it has not been known to produce significant mycotoxins.

A. pullulans can also cause phaeohyphomycosis. It has been reported as a cause of keratomycosis, pulmonary mycosis with sepsis and cutaneous mycoses such as dermatitis and various other infections. It may also colonize hair, skin and nails in humans [6].

Maintaining the cleanliness of our homes and places of work is an exercise we should all take seriously. Aside from keeping up appearances, the state of our surroundings can have significant impact on our health and that of our loved ones.

What are allergies caused by Aureobasidium mold?

Aureobasidium reproduces and spreads by releasing spores into the air, which then travel to other places where they can establish new colonies.

If a person happens to breathe in a significant amount of these airborne spores, they risk experiencing an allergic reaction.

Infants and children, the elderly, and people suffering from certain medical conditions are particularly vulnerable to such reactions.

A weakened immune system as a result of conditions such as leukemia, HIV/AIDS, cancer, or having undergone a recent organ transplant procedure will also result in a much greater risk of ill effects from the mold.

Allergic reactions are basically what we experience when our bodies overreact when trying to get rid of a foreign substance, and end up causing more harm than good.

The most common symptoms of an allergic reaction include:

For those who are particularly sensitive to the effects of Aureobasidium inhalation, the allergic reaction might be even more severe, involving swelling of the throat, tightening of the chest, difficulty breathing, and even death in extreme cases.

When does Aureobasidium mold infection happen?

In case a person happens to inhale a large number of this mold’s spores, an infection could take place whereby the spores actually begin to form a colony in the person’s lungs.

This can be an incredibly dangerous scenario known as hypersensitivity pneumonitis or ‘humidifier lung’. People suffering from this condition will experience fever, coughs, chest pains, dyspnea, and the symptoms of a severe allergic reaction.

This infection is a chronic condition, meaning that the patient will have to take medication for an extended period of time as there is no outright cure for it. In extreme cases, surgery will have to be carried out in order to save the infected person’s life.

Apart from the lungs, Aureobasidium has been reported to infect other internal organs such as the spleen, kidneys and even prosthetic hips [6].

How to remove Aureobasidium mold?

As we’ve seen, this type of mold can represent a significant health hazard to any household where it is allowed to establish itself. Therefore, everyone should be alert to this potential threat.

Perhaps the most important thing you can do to keep yourself safe is to be vigilant of any new mold growth in your home. Just like any other type of mold, Aureobasidium molds prefer growing in damp, warm places.

As every homeowner knows, such places can be quite numerous in an average home, so eliminating these possible risks might be outside the range of possibility for most people. Remaining alert and aware to the threat is the most viable course of action. Be sure to make regular preventative checks of the most common danger zones in your home such as basements, laundry rooms, ventilation ducts, attics, and similar locations.

It’s important to note that you probably shouldn’t try to get rid of any mold growth on your own. Should you try and take care of the growth yourself, you run the risk of accidentally inhaling the mold spores and potentially falling ill. Besides, mold can be extremely persistent and a professional approach is often the only way to get rid of it once and for all.

Calling in expert mold removers is a good idea. Not only we will be able to eliminate the mold growth thoroughly, we will also be able to identify any colonies you might have missed and give you guidance on what you can do to ensure such growths do not occur in the future.

Keep yourself and your loved ones safe from this avoidable menace.