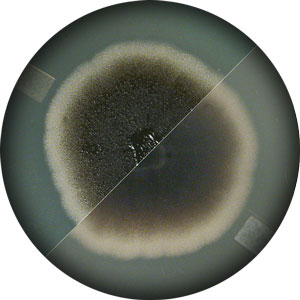 What is Aureobasidium pullulans?

Aureobasidium pullulans belongs to the diverse group of mold fungi known as black yeasts. The name comes from a layer of black spores, which envelop the colonies of this mold. A. pullulans can exist in several morphological varieties. These varieties can be so diverse that there is a dispute among mycologists whether the varieties represent different species (1, 2). A. pullulans is widespread and has various applications in the agriculture, food, and pharmaceutical industry. However, the scope of its utility is still in question due to speculations over its pathogenicity to humans.

In the early development stages, the mold is smooth and yellowish, creamy or light pink. Over time, it becomes slimy and develops chlamydospores, thick-walled, asexual spores that contain melanin (which gives the mold its characteristic black color). Chlamydospores enable the fungus to endure and survive harsh conditions. Depending on the variety (or species), these spores might appear after a week, or it may take up to three to four weeks for them to appear. Spore distribution can vary, so colonies can sometimes become pigmented in the center of the mycelium while the margins remain a light color. Pigmentation might also be random or evenly distributed throughout the fruiting body (2,3).

Furthermore, morphological variations of this mold are so widespread that the shape of the mycelium can be completely different depending on the variant and strain of fungus. In some cases, the colonies may be yeast-like, while in other cases, they may be entirely filamentous and form mycelia (fungal dimorphism) (Fig. 1) (2, 4). The colony shape depends on growing media, colony age, incubation temperature, and the light cycle. A. pullulans grows at 10–35 °C (50–95 °F) with the optimum growth at 30 °C (86 °F).

Aureobasidium pullulans is considered a ubiquitous fungus, meaning it is widely distributed in all sorts of different habitats around the world. In nature, A. pullulans can most commonly be found in the phyllosphere. Phyllosphere is a term that refers to all above-ground surfaces of a plant, although the main focus is usually the surface of the leaves. Aureobasidium pullulans is oligotrophic, meaning its an organism capable of living in environments with very little nutrients and water. For this reason, leaf surfaces present such a typical habitat for this species. It has been linked to the decay of various fruits (pears, cherries, grapes, oranges, etc.) and has been described as a mild pathogen of plants that causes softening of plant tissue (3, 4).

Interestingly, A. pullulans has also been identified as a potential biocontrol agent against other fungal plant pathogens (4). Biocontrol agents are organisms (be it predators, parasites, or pathogens) that can potentially be used for population control or eradicating pests and pathogens. In today’s climate of environment conservation, they present a potential replacement for harmful chemical pesticides. Because of this mechanism of deterring other fungi from plants, there have been differing opinions about the role of A. pullulans in the phyllosphere (3, 4, 5).

This fungus may be an opportunistic pathogen, causing infections only in already damaged and weakened plants. Furthermore, it may be a space parasite that lives on the surface of the plants, limiting its exposure to the sun and water, but does not take nutrients from the plant, nor does it cause harm to the plant. A. pullulans may protect plants from other fungi by creating certain metabolism products, primarily antimicrobial compounds, that are toxic to pathogenic fungal species or by simply competing with them for the habitat. A. pullulans also inhabits moorlands and forest soils, as well as fresh and salt waters (3, 4).

Indoors, A. pullulans can be found in damp places, such as bathrooms, kitchens, or basements. A. pullulans is primarily a saprophytic organism, which means that its main source of nutrients is decaying organic matter. As such, this mold has been associated with biodeterioration and can often be found on antique wooden furniture or damaged paintings that contain natural pigments (3).

Aureobasidium pullulans and its role in biotechnology

Thanks to its production of various sugars, enzymes, and secondary metabolites, this fungus has shown great potential for application in multiple industrial and biotechnological fields. Besides the application mentioned above in the biological control of harmful microorganisms through allelopathy (3, 6), A. pullulans is also known for the production of a polysaccharide called pullulan. So far, pullulan has been greenlit for use in the food industry and the pharmaceutical industry for the production of medicine and skin cosmetics. This substance is edible and biodegradable and can form a thin transparent film that does not permeate oxygen. For these reasons, pullulan has been suggested as an alternative food packaging and medicine capsule material (or drug delivery system) (3, 6).

Furthermore, A. pullulans may present a new source of protein in developing countries since there are suggestions that this fungus could be used for single-cell protein production. The single-cell protein concept proposes that microorganisms (such as bacteria, yeasts, and fungi) that have been proven to be nonpathogenic to humans could be mass-produced on agricultural waste from those countries (e.g., rice straw in China) made into a new food source or food supplement source. However, since it is uncertain whether A. pullulans can act as a human pathogen, this application is still under dispute (3, 6, 7).

These are only some of the applications and benefits of A. pullulans that have been researched in detail so far. There are multiple other enzymes and saccharides that are currently being investigated for their potential use in different industrial fields. These also include environmental pollution control. Overall, these fungal species show great potential for industrial use, but their potential pathogenicity poses a problem in developing new patents and various innovations (3).

As mentioned above, it is yet undetermined whether A. pullulans can officially be considered a human pathogen. So far, there have been multiple publications and case studies presenting cases of infection. Most of these cases have been described as mild or opportunistic and have often been hospital-acquired (nosocomial infections). Opportunistic infections are infections that wouldn’t normally occur unless a person’s immune is severely weakened. This is why most of these infection cases were identified in immunocompromised patients, primarily cancer patients or people who have suffered significant physical trauma or complex surgical procedures (8, 9, 10).

The symptoms and types of infection vary greatly. An infection may more commonly appear on the skin surface or beneath the skin (cutaneous and subcutaneous infections, respectively). At the same time, in rare cases in immunocompromised patients, it may cause eye infections, systematic infections, or infections of visceral organs. Most infections can be effectively treated with adequately prescribed fungicides (8-11).

Aureobasidium pullulans is known to cause allergic reactions and asthma attacks in people prone to allergies. In a clinical study, up to 17 % of tested patients showed sensitivity to A. pullulans and tested positive during a skin test (most of whom had a history of allergies). This mold may also lead to hypersensitive pneumonitis if a person is exposed to a high concentration of fungal spores (12).

Despite varying reports about Aureobasidium pullulans’ effects on human health, mold exposure should not be taken lightly. To ensure healthy living conditions, it is always well-advised to consult mold removal experts about the evaluation and decontamination of living spaces.